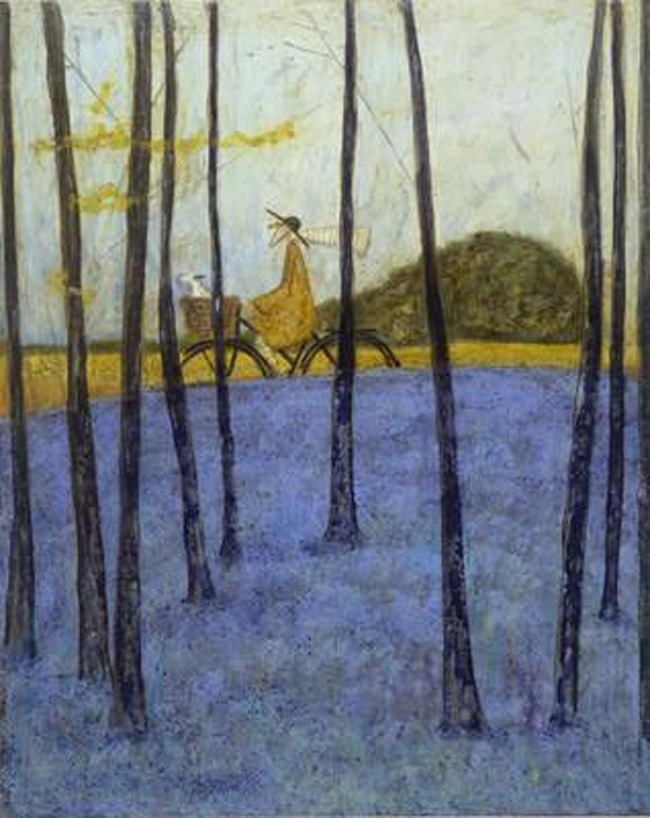 Flying Past the Blue, Sam Toft

For months and months I kept the message on my answering machine. It was from my pal Les who tormented us every Sunday with his plans for an epic ride into the mountain forests. It didn’t matter if it was rain, snow or typhoon, you were going on that ride because, if you didn’t answer the phone, he’d be at your front door an hour later.

Many’s the time I would fake sickness or tell him that I had a hangover but it didn’t matter . . . we were going!

The message he left on my machine said “Do you guys want to do a road ride or a trail ride today? Sort it out between you and Mike (the third member of our triumvirate) and let me know ‘cos I don’t want to have to make the decision for you!”

I phoned back and got his answering machine, little knowing that it would be the last time I would ever communicate with him.

In my answer I told him that they could choose between themselves as I had guests in town and wouldn’t be able to ride that day—the only reason he would listen to.

I was a little bit relieved to tell the truth, most of the rides with Les and Mike were punishing affairs that left you either covered in blood or completely knackered, or both.

And so I took my guests on the Grand Tour of Vancouver, everybody who’s visited Vancouver knows it. It hits all of the iconic spots, Lynn Valley Headwaters, The Suspension Bridge, Stanley Park, Cleveland Dam etc., places where you can enjoy all of the grandeur of the West Coast topography without a drop of sweat!

It’s all great stuff, but I myself need to get beyond the view to feel the leaves brushing against my face and the rocky, twisty trail underneath me and my bike.

We stopped for an unearned lunch, we traipsed round the gift stores but I’ve done this so many times that, although I still appreciate the beauty of it all, it’s my backyard and I see it every day. Never ho-hum but no longer breathtaking.

Meantimes, Les and Mike have decided to ride up over Eagle Ridge mountain in Coquitlam. Coquitlam is a fairly new suburb of the Big City, on the edge of nothingness.

Eagle Ridge mountain is not a place for the faint of heart, it’s steep, it’s treacherous and it’s the habitat of some dangerous predators, Bears and Cougars being the principal offenders. Don’t forget that the number one law of the woods is that you don’t have to outrun the bear, you only have to outrun your friend!

The wilderness in Coquitlam starts right on your doorstep and if you look at a map, you’ll see that there’s not a road to be had northwards until you get to Mount Currie almost 200 kilometers away, and even that place is little more than a village.

To get to the Eagle Ridge trails you have to climb a long, steep approach road and this in itself has you blowing for tugs before you hit the really difficult stuff. When I say difficult, I mean it in every sense, the surface turns into a loose gravel forestry access road and the pitch intensifies at the beginning, to the point where you have a mighty struggle just to keep the pedals turning. Your lungs are screaming for air and you are at your limit. This dear reader, passes for enjoyment.

It was a badge of honour to be able to ride up this section. I made it once or twice but more often than not it was a case of succumbing to that pitch and walking and pushing. Even walking and pushing had you gasping for breath at the peak, and had your heart visibly pounding out of your chest.

This is where Les died.

Poor Mike was the only other human for miles around. He told me that Les had been a couple of minutes behind him on that steepest of sections and that he was pushing the bike on the final approach.

When he got level, he just mumbled a couple of words and keeled over. Mike thought he was just fooling about but quickly realised that this was a serious situation and started CPR.

It was a truly hopeless scenario. Neither of them had a cell phone and, in an area where you usually see a lot of mountain bikers, not one single rider passed by. It was the day of the Vancouver Indy, so I guess most of population was downtown.

Amazingly Mike managed to bring Les around for a minute or two and thought that he had saved him but it was not to be, he just fell back again and was forever gone.

Imagine if it was you who had to deal with this situation. Here you are miles from anywhere, no help at hand and your friend has just died in front of your eyes. All that Mike could do was to lay Les down at the side of the trail and ride back to the trailhead to find help.

The trail was not accessible by vehicle so it was more than an hour later that Mike and the emergency personnel arrived back at the tragic scene. Mike said that he thought that they would find Les sitting up and complaining about being left adrift but alas the horrible reality met them.

I got the phone call from Mike while I was sitting in the car looking out at the magnificent view from Stanley Park at the North Shore mountains. From pleasure to despair in a matter of moments.

“Les had a heart attack on the trail,” he said.

I then asked him what hospital they had taken him to but then Mike said, “No. Les is gone,” and it was as if my own soul had left my body. Such a numb, surreal feeling.

Strangely you turn selfish when these things happen, “What am I going to do now? Who will I ride with? What happens when I get lost in the canyons in Moab? Who’s going to map out the routes and organize the cycling vacations?”

Somehow I got through the next week, my soul still hovering above my head. I picked a beautiful eulogy out of the cosmos and somehow delivered it to a packed funeral service. (Even though I’m terrified at public speaking).

I’ve never been on a wilderness mountain trail since that day back in 2002!

I do still ride my bike a couple of times a week but never would I dare go into that void without Les by my side. He just had a built in navigation system that would give homing pigeons a run for their money, whereas I could get lost circling a downtown parking lot (and Mike wasn’t much better.)

About a month later I was walking to work contemplating the perishable nature of our existence and started wondering about the afterlife. I looked up to the heavens and asked Les for some sort of sign and, at that very moment, a bird popped out from under an urban bush and started chirping away at me.

Not a convincing sign I thought, but enough of a coincidence to make me think.

I walked on and kicked a leaf, “That’s a strange looking leaf” I says to myself, so I looked at it closer and it turned out to be a crunched up $100 bill. Wahoo! Did Les send a message to me?

I phoned and told Les’s wife about the incident and she replied that Les would not give a hundred bucks away so freely—either it wasn’t a message from him or he would find a way to get it back from me.

It didn’t take him long.

That very evening somebody smashed the side window of my car to get at something I’d left on the seat. Replacement cost? $100! It was Les!

He’s with me still, every time I go out on the bike I feel that he is there either riding alongside me or in the form of a unknown cyclist on the other side of the road. I saw his spectre once, riding off into a foggy morning while I was walking around the park.

On a more eerie note, I was hiking with my daughter in some secluded woods in Montreal, a mysterious zephyr suddenly blew in down the steep trail in front of us, tossing leaves and twigs in front of itself. It came right up to our feet stooped and then whirled away.

With all the time that has passed it is not so much of a harrowing story now, more of a comfort in knowing that we all have to go sometime and what better way can you go other than riding your bike.

He truly did die with his boots on.