Mystery at the Bridge Club 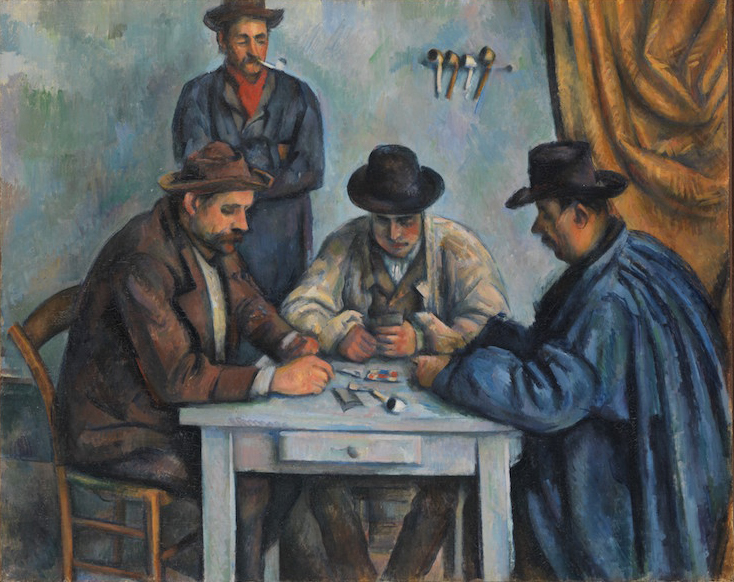 It seems remarkable that it was only four months ago that Rudolf and Harriet turned up at the bridge club uninvited, but made quite a splash. Jack was the director that Thursday afternoon, when there was a single free table and made an appeal to the members to welcome the newcomers. It was apparently a decision that no one could have raised any objections to. At first glance, there was nothing to immediately distinguish the couple, apart from Rudolf wearing an eye patch and their lightly emaciated appearance. It wasn’t until they were recognized as regulars that a number of behavioral patterns began to be noticed, much more for their playing ability than the odd personality quirks or more noticeable features that gradually got noticed.

Each one of their traits and behaviors followed a pattern, if one were looking for it, but all bridge players encountering new competition usually focus attention on their bidding and playing of the hand skills. After a while, their dress was regarded as slightly eccentric, such as Harriet’s gold necklace and, in retrospect, should have aroused more notice. It featured old Spanish pieces of eight and consequently worth a considerable amount of money but was given only minor attention compared to the many comments on their daring playing style.

Even Rudolf’s pirate-like eye patch over his left eye, certainly unusual at a bridge table, was given scant attention due to the political correctness that dominated at the club. It was considered to be in poor taste to comment on or question anyone’s physical disability and nobody wanted to make personal comments. It wasn’t until the third time I played against them that I noticed Rudolf’s knotted ponytail when I caught sight of the back of his head for the first time as he walked away from the table, and his gold tooth when he occasionally smiled.

Since the club includes a fair number of individuals who hailed from what was the British Empire before the war, it was the general consensus of the club crowd that the new pair were of Caribbean extraction. Perhaps of mixed race with a strong Irish or Scottish brogue by the way they spoke.

Lastly, the pair’s preference for playing the suits of spades and diamonds might have given more information away, had the crowd at the club realized that they might be symbolic in some way. Harriet’s charm bracelet featured pendants of Clubs, Diamonds and Spades but the Hearts were missing. She was apparently also unaware that the regulations at most clubs forbade the use of fragrant perfumes but no one took offense and even thought it quite charming when she answered that the fragrance she liked to wear was called “Walking the Plank.”

Rudolf’s left hand was tattooed with the image of a skull and crossbones and although smoking was strictly forbidden, he kept an unlit pipe in his vest pocket. He also wore a key chain of what might be bone or ivory. Nevertheless, the couple’s popularity rose sharply with each week of play and both were asked if they might consider playing with ambitious regulars who participated in regional and national competitions.

I, too, might have skipped all these obvious traits or clues as meaningless trivia. In retrospect, I think they were mocking us. It was only when our two newcomers proved that they were good enough to play in a regional championship with us “land-lubbers” that I followed my instincts and decided that something about them was suspicious and more than mere coincidence. It would be wise to learn more about them and I decided to speak to both Jack and a good policeman friend Phil, an expert on scams, fraud, and the betting parlors.

Jack look embarrassed when I suggested an investigation of sorts… “Well, I can’t see that they have committed any crime, Who else has complained?”

“No one,” I stammered, “but shouldn’t we consult the police about their past activities? All we know about them is their unverified identities. It seems strange that such good players should only have joined the National Association such a short time ago.”

His evasive answer told me that that I should have gone to the police first. Were bets taken either legally or illegally on the regional and national bridge matches? I called Phil and posed this question. Was there a money trail to follow?

Phil hesitated and asked me to come and see him rather than answer on the phone.

“But Phil, tomorrow may be too late. The Regional Championship ends tonight and Rudolph and Harriet appear to be leading the tournament. There is something fishy going on!”

As I found out the next day, it was too late. Rudolf and Harriet had finished first, after which no word was heard from them.  It turned out only a week later that Phil had uncovered a money laundering scheme. Bets had been placed over the past year throughout the country with the cooperation of bookmakers wagering on several previously unknown talented pairs who had won the big prizes at bridge competitions against very long odds. The Betting Shops were mystified and ruled out blind luck. Such a pattern could never be sustained. This winning pair in each case would then disappear from the bridge scene for several months without a trace and were followed at an interim of about half a year by another new pair operating in a different part of the country with the outcome repeated.

Whoever these individuals were, they had employed different guises, accents, make-up and costumes but no real identifying traits. Phil asked me not to release this information but warned me on how to beware and identify them.

“It’s the old Bait and Switch routine, Norm. The more information you think you know, the easier it is to bait and then switch! At another club they may appear and sound like Irish, Spaniards, Chinese, or Norwegians!”