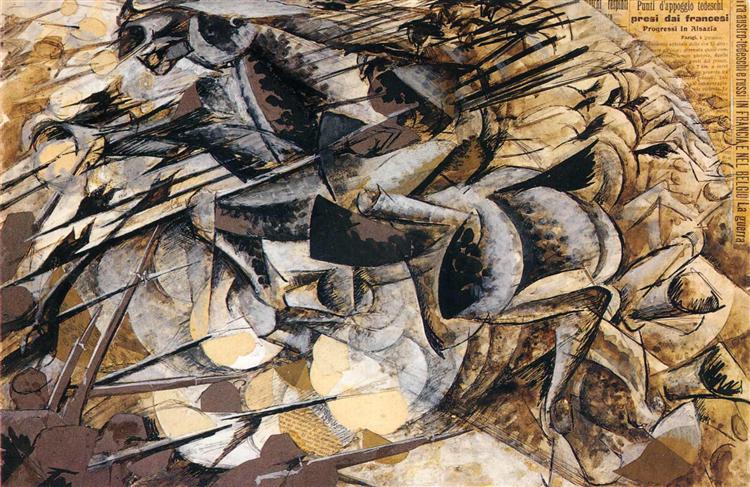 The Charge of the Lancers, Umberto Boccioni, 1915

Japan went to war against China in 1937. That same year, the Japanese army captured Nanking, the capital of China. For weeks, Japanese soldiers carried out horrific atrocities against Chinese civilians: mass beheadings, rapes, disembowelings, and infanticide. Unlike the Communists or the Nazis, the Japanese made no effort at hiding their atrocities, and the world was filled with deep revulsion at their actions. And also, unlike them, the atrocities were not the result of a plan conceived of by the highest authorities, but, rather, it was the individual indulgment of the troops.

The memory of that incident was resurrected in the West a few years back with the publication of Chang’s The Rape of Nanking. But what was not recognized in that book, nor was it recognized at the time of the Nanking capture, was not that it was an atrocity so much as that it was an anachronism. The Japanese soldiers behaved the same way in WW II as they did under Tokunagawa.

Modern day armies are professional, standing armies, proud of their professionalism and discipline; some even maintain a strict code of ethics; this ensures that both the officers and the civilians of that country do not feel shame, but rather pride, of their armed forces. The Geneva Convention has codified these ethics (some of the tenets may seem a bit absurd, such as the stipulation that being killed by chemical weapons is somehow immoral, while being ripped apart to shreds through artillery is acceptable). This concept of professionalism slowly began in Europe at the end of the 1600s and was a reaction to the horrors of The Thirty Years’ War.

Up to that time armies had, more often than not, been undisciplined gangs by today’s standards. The individuals came together when a war was announced. The troops were rarely paid by a bankrupted State and maintained themselves by the theft of provisions wherever they passed and, when a town or city was captured, by stealing everything in sight and, for entertainment, by rape and murder. Oftentimes, a ruler had to persuade “his” armies to do or not to do something instead of simply ordering them. Quite frankly, the makeup of those armies was frequently made up, to a large part, of criminals and psychopaths. Needless to say that psychopaths found that milieu to be ideal (the Balkans in the 1990s is an excellent modern, anachronistic, example of small “armies” led by known gangsters—armed by the Serbian and Croatian governments—committing horrific atrocities on civilians for political reasons at the behest of their governments, whereupon retaliation of atrocities was carried out against inoffensive Croatian and Serbian civilians).

Vikings, for example, have been sanitized and glorified by Hollywood and modern day Scandinavians, but the truth of the matter is that the marauding Vikings were likewise vicious psychopaths; just to give one example, the Vikings were fond of a game which consisted of tossing a captured baby up in the air and seeing who could throw a spear at it and impaling the babe. Pirates are another group which have also been sanitized and glorified by Hollywood. In reality, they, too, were nothing but vicious criminals. Yet, we and our children, at times, merrily put on costumes of Vikings and pirates during festivals. One wonders if a century or so from now, children during Halloween will dress up in costumes as the KGB, SS, or Khmer Rouge.

To be sure, there have been many instances where a certain degree of professionalism and, therefore, discipline was imposed on a State’s army and this usually went hand in hand with the consolidation of the king’s power within the realm. Thus, we see that the armies of Queen Isabela and King Ferdinand of Spain during the 1400s were quasi-disciplined and quasi-independent. When Columbus explored the New World for the first time, the captains of the other two ships would disobey him and sail to other places than he ordered even though he was the designated admiral of the fleet. The independent, insubordinate, and anarchic Conquistadores in the New World were eventually brought to heel, and the crown rule firmly established in the mid-1500s. Afterwards, the succeeding Spanish monarchs cracked down.

Centuries before that time, the ancient Roman Empire’s legions were the acme of professionalism and discipline. Yet, throughout the centuries, the conquest of an enemy city was always the opportunity to reward the common centurion by allowing him to run rampant and loot, rape, and kill in a captured enemy city—but only with the permission of the commander.

This practice of laissez faire when pertaining to armies came to an end after The Thirty Years’ War because of Magdeburg, a city whose inhabitants suffered a thousand-fold the fate of Nanking centuries later. The armies in that war, on both sides, were the equivalent of a mass of vicious locusts to the point that cannibalism by civilians became common in some areas in order to survive. Modern day persons may bristle at this, but The Thirty Years’ War surpassed World War II in suffering, devastation and atrocities. All this occurred, ironically enough, in the name of God and was the reason for the birth of atheism and agnosticism in Europe, as Europeans apparently vowed that no more Magdeburgs and no more wars of religion would ever take place, a vow which they kept.

After that war, sovereigns began imposing harsh discipline upon its soldiers, and flogging for minor breaking of the rules became commonplace (thanks to Voltaire’s Candide, Frederick the Great’s army was the best known case, though hardly the harshest). Looting by individual soldiers became a hanging offense (yet a nonchaotic looting would at times take place through “requisition” of specific items, or animals, important to the invading army on orders of the general). Civilians were off limits as far as conflict. The concept of honor was applied to the army. Simultaneously, those officers who were from the aristocracy tended to view their soldiers as scum (“They are the scum of Europe,” said Wellington, a sentiment echoed by most commanders). This mutual animosity eventually came to a head in 1918, at the end of World War I as some soldiers and sailors mutinied over their commanders’ murderous incompetence in France, Italy, Germany, and Russia and, at times, executed their own officers. But the main point is that, beginning in the 1700s, the uncontrollable destruction and atrocities that were the result of armies passing through enemy territory became a thing of the past, and the concept that soldiers should kill only the soldiers of the opposite camp and never the civilians came to be seen as the normal, professional, ethical state of affairs. A very brief recurrence occurred during WW II in Europe, particularly by the Russian army and the German Waffen SS, although it must be mentioned that the British navy and army occasionally murdered POWs, and all the combatants’ air forces murdered civilians. At the end of the war, Poles, Czechoslovaks, and the French also carried out atrocities against German civilians—all these incidents are part of That Which Must Not Be Spoken.

This explains to a large degree why some colonials in North America viewed the native Indians with loathing. Nowadays, Native Americans are seen as unicorns: they were all benevolent, inoffensive, hippie-like, traipsing along the forest, at one with nature. In reality, they were human beings, just as they are the world over. Some Indians had been carrying out atrocities upon others long before the white men arrived. When they went on the warpath against whites—or against other tribes—some not only would they kill the men, but also the children and the women, nor did it make any difference if the man was an armed militia, or an inoffensive farmer. As a result, tit for tat retaliation by white colonials occurred (I apologize if any Politically Correct sensibilities are offended by this fact). The same is true in South America—the Mayans recorded some of their atrocities.

This revulsion against atrocities also explains why, when the Turks suppressed a revolt by the Bulgarians in the late 1800s and they engaged in war crimes, Gladstone was outraged and urged that Great Britain intervene (two decades later, the Turks committed the Armenian genocide), just as a century later some in America urged military intervention in Iraq and Syria when reports of the use of chemical weapons against civilians filtered to the West.

It is interesting that we tend to see nowadays that the further a country is, geographically and culturally, from Europe and North America, the more likely it is that we will still see atrocities and the torture and executions of POWs. We have seen it in Africa, Southeast Asia, and the Middle East. For example, in the 1948 war over Palestine/Israel, Jews would never surrender to the irregular forces, which would behead prisoners and then mutilate the bodies. If they surrendered, they specified that they would only surrender to the British-trained, disciplined, Arab Legion of Jordan. We also saw it during the Vietnam War when the North Vietnamese routinely tortured to death American servicemen.

One last point needs to be made. Ever since the end of WWII, much ink has been spilled agonizing over how human beings could have carried out such horrific atrocities, how such an anomaly as the Holocaust could have occurred. They have it backwards. Taking into account the history of human beings it is the prohibition against atrocities that is the anomaly.