Poets Laureate Are Part of the Machine

Let your life be a counter-friction to stop the machine.—Henry David Thoreau

As I often write, poetry has become co-opted, castrated, and corralled. Poetry is not dangerous to the elites in power, unless of course one is referring to those in Cuba, China, North Korea, and Venezuela. In America, money, the media, and politicians have succeeded in rendering poetry innocuous, at least the poetry that is accorded a public platform.  Little questioning and challenging exists regarding the poetry machine—the monied foundations, government cultural councils, universities, festivals, and magazines. The media simply echoes the machine, as publicist for favored poets.  In that sense, it is also clearly part of the machine.

In all the years I’ve been writing poetry, the machine has failed to co-opt and corral me. Evidently, the compulsion to speak and write truth exists deep within my being to the extent that I would rather speak and write truth than obtain publications, invitations, grants, laureateships, tenure, and general limelight. Why, I am left wondering, do the bulk of poets prefer the latter and behave more like politicians than parrhesiastes (truth tellers)? The power of groupthink and conformity, as opposed to staunch individuality, evidently overwhelms most poets today.

The article written by Boston Globe correspondent Grace Griffin, “Boston’s Poet laureate Porsha Olayiwola explores theme of home with a new event series,” serves as yet another sad example of the complicit media and its failure to question and challenge anything at all regarding poetry. And so, I shall do the questioning and challenging that Griffin failed to do.  For the establishment, those like me simply do not exist. In essence, America is really not a democracy at all, but rather an aristocracy of monied elites in diverse power positions. Griffin is simply a spokeswoman for those elites. And the poetry machine has become a microcosm of that reality. Simply examine the Poetry Foundation, which has over 200 million dollars in its coffers, thanks to a donation made by a scion of a drug corporation.

As for the Academy of American Poets, which censored my comments and banned me from its forums, the amount in its coffers is simply not revealed on its website, but it received a 4.5 million-dollar grant in 2020 from The Andrew W. Mellon Foundation, which will be distributed only to elite poets laureate of the machine. In fact, examine NPR’s article, written by another service journalist, Elizabeth Blair (yes, Eric must be rolling in his grave), the “Academy of American Poets Receives $4.5 Million Grant.” Any questioning and challenging in it at all? No! Just more publicity for the poetry-establishment machine. Blair notes that prof/poet Elizabeth Alexander, lauded by the Academy of American Poets, is actually the president of the Mellon Foundation… which also helps fund NPR. Hmm. Alexander notes that the money will “create the conditions and open up the creativity of poets, not only to make their own poems, but also to think ‘how can communities use poems? How can we let poetry be a way that we can explore what it means to be American in all these different places in real time?” Sounds like BS to me.

Now, back to Griffin’s article.  Unsurprisingly, considering the metastasis of identity politics, Porsha Olayiwola is a black female, who surmises that “I had been thinking about home for a while now. It became more of a question of ‘who has home? Do we like our homes? How do we fit in a larger home like a city or the earth? How do Black folks feel as a part of this country? Is this country home?’ The questions kept forming and floating around.” Brilliant, right?  Original, right? Black folks. Not Americans, but black folks! On Olayiwola’s Boston City web page, the poet notes:

Often times, those intersectionally-marginalized are not given a voice nor resources to dictate their circumstances. Porsha’s writing uses a dangerous imagination that allows folks of the queer, woman, and black diaspora to dream up their best selves, outlive their oppressors, and dictate their joy. 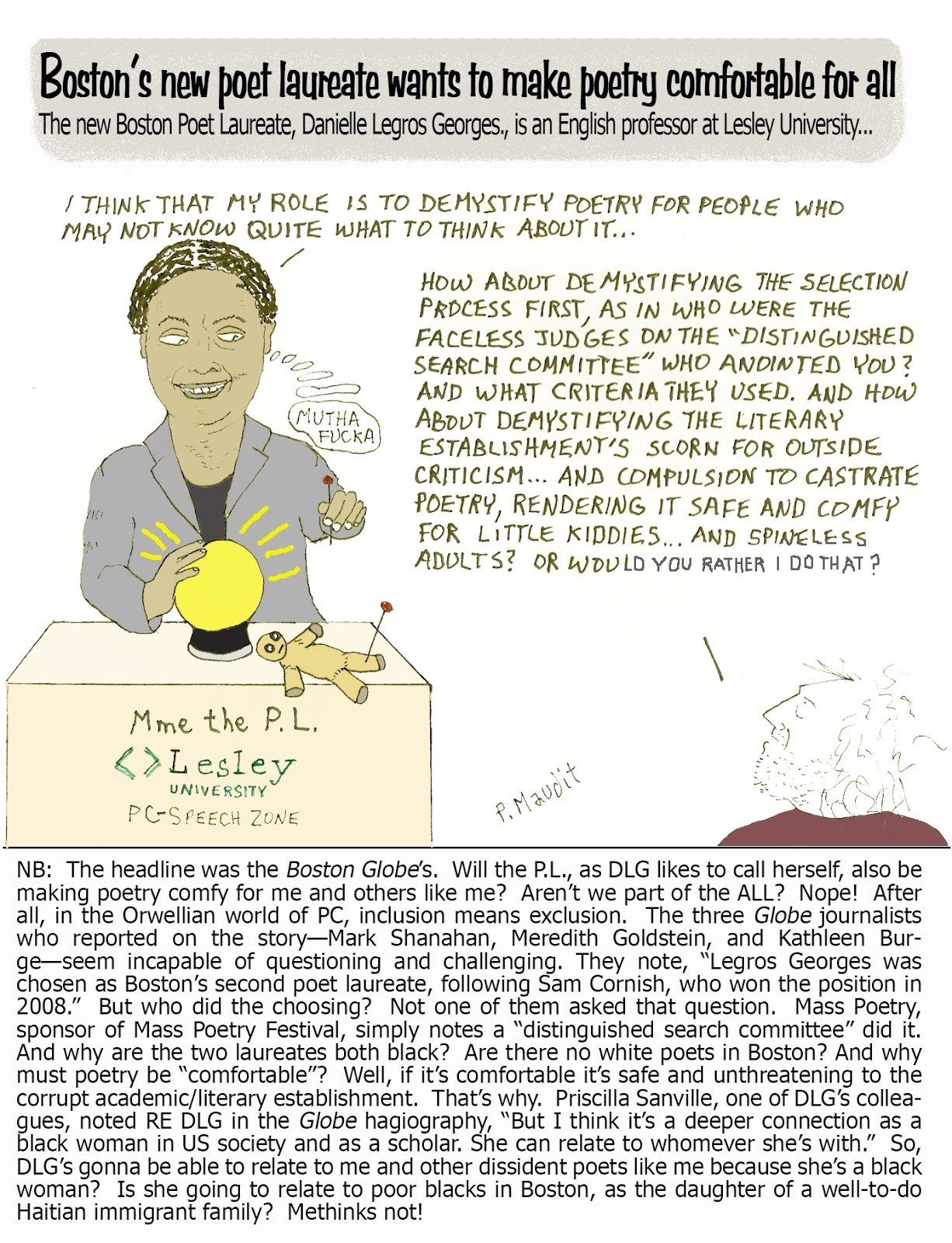 Well, Olayiwola certainly can’t lament being “intersectionally-marginalized” given her status as poet of privilege!  According to Griffin, Olayiwola’s first virtual (home) reading will be presented by former black Boston poet laureate of privilege Danielle Legros Georges (see my cartoon, right), which will be followed by an open mic hosted by Puerto Rican POC of privilege “poet and teaching artist” Anthony Febo. “Intersectionally-marginalized” or rather intersectionally-privileged?!  Well, identity politics rules in the poetry milieu today! Truth certainly does not!

According to Griffin, Olayiwola’s series will collaborate with staff at the Mayor’s Office of Arts and Culture.  Machine politician Mayor Walsh, unsurprisingly praises Olayiwola: “Her commitment to bringing our communities together is so valuable during this time. We greatly appreciate her ongoing efforts to make Boston a place where everyone can express themselves creatively.”

Why are journalists seemingly incapable of criticizing poets embraced by politicians?  And might poets who criticize, as I do, be permitted to express themselves creatively? Or is the inclusivity mantra likely nothing but Orwellian exclusivity? That’s certainly what I experienced when I openly criticized the Boston National Poetry Month Festival, See my cartoon, below, on its director, Real Estate-Broker Poet Harris Gardner. 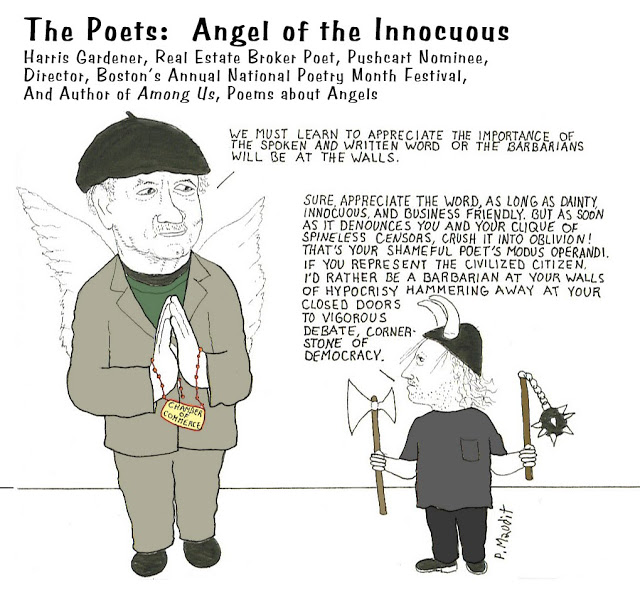 Evidently, I am against lofty poet titles accorded by faceless judges of the machine, as well as poets cozying up to political hacks. The City of Boston’s poetry site (boston.gov/poetry) boasts, “The City’s Poet Laureate raises the status of poetry in the everyday consciousness of Bostonians.”

Well, it lowers the status of poetry in my consciousness, but, well, I’m not a Bostonian. Sadly, my point of view will NOT be heard/read by proper Bostonians. Sure, I am probably a bit too critical, but in a milieu where criticism is all but inexistent, maybe that’s not such a bad thing. Rather a poet kamikaze, than an establishment poet ordained by a political hack. Rather full ostracizing, than a castrated, co-opted, and corralled poet of the machine.

NB: To my surprise, Griffin responded, or sort of. Evidently, she had not yet learned the unwritten mantra of the media: when criticized, do not respond.

Thank you for the clicks and some promotion of my article on your little website! I will not be forwarding this to Porsha.

And so I responded. Then silence finally became golden for Griffin.

Thank you for the response… but how could you really ignore the entirety of my counter-essay?  How sad for a journalist to do that. Come on, I know you can do better. Take a breather, then engage… at least within your own mind. Contrary to your assertion, the counter-essay and cartoon have NOT been posted on my “little website,” which does NOT exist for clicks-sake. You help Porsha thrive in her little intersectionally-privileged cocoon. Why not instead help her think outside of that box by helping to expose her to unusual criticism like mine. Anyhow, no hard feelings. I do not know you. In reality, I’m just trying to help, but I know you can’t/won’t see it that way.