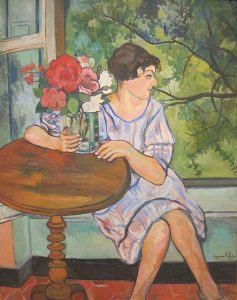 Young Girl in Front of a Window by Suzanne Valadon, 1930

She later realised that she should have known better.  Experience had shown that those surges of confident assurance followed by affirmative and positive action all too often ended in a decisive and humiliating defeat.  It was the sort of sequence of events which would have raised from her father, had he still been alive, a reminder that hubris always goes before a fall, and she hadn’t yet grown big enough for her shoes let alone her boots.  However, at the time, it had all seemed so straightforward, so assuredly natural, so easy, helpful even, and she could not see it doing any harm to anyone.  Prospects were looking good.  How little she had known.

It was an innocent enough beginning.  She had been a keen supporter of the new Project from its inception.  She could see how valuable it would be to people like her, retired people who still had an interest in the World and its affairs, an openness to new interests and pursuits, and who also had a need to stay in touch with others, and hopefully to make new friends.  She had stuck with the new venture throughout its initial uncertain and unreliable start-up days, doing whatever she could to ensure it would survive.  And it was in doing that that she had experienced her downfall.  The irony of the situation had not escaped her notice.

She realised later that she had been naïve, and she remembered, with some fondness, her Dad and his assessment that she hadn’t yet grown sufficiently in her understanding of the ways of the world to survive very well in it.  She had no regrets though.  She had acted out of her own best interest, an interest that had been shared by a group of folk she still remembered with affection.

She had been instrumental in starting a new group, a “What’s News” group, as they were called, and a group specifically for the area around where she lived, the other groups being located some way off.  Whether the area where she lived was the reason or not, it was a group she felt was more centrist in its approach to politics in contrast to the two groups already established elsewhere, which were definitely left wing in her view.  Though those other groups identified as centrist and liberal in their values and views, she felt they were more left than centre, and that some of them, in a cool light, would be better described as totalitarian and communistic.

She had experienced the rejection of some of the more influential members of those groups who had made it clear that they felt hostile to what she related to as centrist.  What she felt was centrist was, in their view, right wing, or extreme right wing, or fascist even.  She had been astonished to realise this as it was perfectly clear to her that the foundation of her approach to all things was a belief in the fundamental importance of the individual, in the individual as the foundation of everything in human relations and society, and in the need to preserve individual freedoms as far as possible within the confines of a cohesive and working framework.   It seemed to her that their approach was the more fascist one in that they put the State first, and required the individual to submit, subsume, go under, conform, and support the dogma and doctrine currently in vogue, under the threat of being “cancelled”.

Her group was abandoned by the Project after a few months.  It was expected that the group would collapse as a result.   The Project faced financial difficulties in its start-up, and an uncertain future.  The advice was, if the difficulties were resolved, the group she was involved with could once again become a part of the overall Project.  In the interim, it was to be disbanded.

She felt strongly that the group she had established should continue, if at all possible, notwithstanding the difficulties the Project as a whole was undergoing.  And so she kept the group going.  They initially tried meeting in the cafeteria at the Seniors Centre, then they met in the communal lounge in the building where she lived.  She somehow kept the contacts going, and the interest going.

As the Project as a whole continued to flounder, she realised a more permanent situation needed to be established for the group if it was to continue and flourish.  To that end, she approached a local businessman, who was invested in senior accommodation, and who had rooms on his premises the group could use.  She also approached the local Library, and the Seniors Centre, and the local Community Centre, and established the availability of rooms suitable for the group to meet in.  She worked out the costs involved and the members of the Group advised they were prepared to meet the costs to keep their group together and to meet regularly.

And then the businessman had got back to her and advised that the group could use a room in his building, free of charge and, more, that he would have his staff provide coffee and muffins.  In exchange, the group was to be open to any resident in the building who wanted to participate.  She had readily agreed, and the group had met in the room provided, for some weeks, free of charge, until the folks who were still trying to keep the Project going heard of the arrangement.

Those folks subsequently made their own approach to the businessman, presenting themselves as the authority behind her and the group, and offering the businessman the tantalising and appealing option of all the residents of his retirement residences having access to the entire program offered by the Project, free of charge, and as a result secured from him a promise of his continuing support of the Project, and the use of rooms in his various buildings, free of charge.

She had thereafter found herself excluded, rejected, feared she supposed, on the grounds that her efforts to keep her local group going could have potentially turned into a competitor for the Project, and undermined its existence – a Project that found it could now only keep going because of those free of charge rooms available for its use in the various buildings that the businessman owned – a situation which she had instigated.

That she was not thanked for bringing about the solution of their difficulties spoke to her of the needs of those left wingers to maintain their control of the management structure of the Project, and the management structure of life generally, to quash and suppress individual initiative, particularly when it was seen as right wing, no matter how much they had benefitted as a result, and to keep everyone in submission to their power and control.

Well, she thought, they probably will not last long.  After all, how can they.