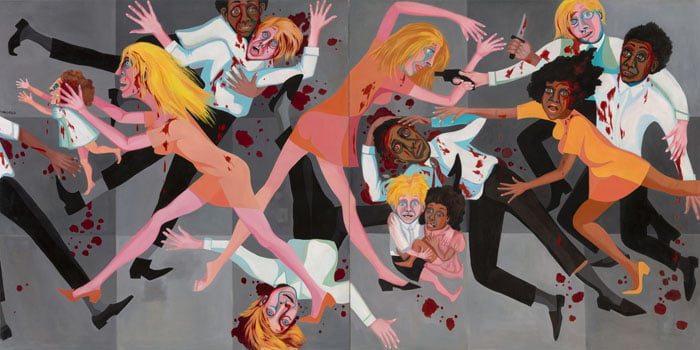 Finally, we have arrived.

Over the course of many years I have seen many pundits and fake news analysts of the political left and the intellectually bereft make comparisons between our country now, and Nazi Germany in the late 1930s and beyond. I rejected every instance, every illustration, every comparison of Trump=Hitler (just as I did when Democrat/leftists compared Bush with Hitler) or America=Third Reich. I never would accept that our country was ruled by a fascist because it isn’t and I never would accept that our country had fallen into dictatorship and tyranny, because it hasn’t. I rejected every comparison between the United States and Nazi Germany, I did this for years, sometimes daily—until now.

Welcome to Nazi Germany, mid-to-late 1930s. Many fake analysts of the left have been calling out false comparisons between our country and Nazi Germany for at least twenty years (though few such things were said during the last president’s administration), and now they are finally right. Broken clocks are right twice a day. Broken, failed fake analysts can be right once—but not at all for the reasons they elucidated in their ridiculous but excessive fake analyses.

We have finally arrived, after all this is the place where the leftists and Democrat identity politics demagogues want us to be. We are a country in a catastrophic cultural decline and political malaise all driven by Democrat/leftist utopian cultist communist revolutionaries and their fake journalist fellow travelers all “stirring the pot” of public angst for the betterment of the “mission.” After all, all of this navel gazing and vicious self-criticism and self-hatred and demonization and harsh rhetoric all serve a purpose, right? Where is the vaunted hyper-toleration of the Democrat political left? It is all a great lie that serves a single purpose.

Nazi Germany was certainly a fascist, totalitarian dictatorship. The United States is not. What then brings our two societies now into close alignment? Race.

Hitler was obsessed with race as were all of his acolytes. They understood politics not as states (and their citizens) interacting with one another, sometimes warring with one another, but rather as race conflict with what they considered the “superior” race (themselves) entirely entitled to destroy whomever they considered to be “inferior” races. World War Two was a very different war than its numerical predecessor. World War One was about politics and political systems—it brought about the collapse of systems and empires and changed Europe and the world forever. It also set the stage for the next nightmare war; that is, without WW1 there would have been no Nazism, and no WW2.

In many ways WW2, as seen from the Nazi perspective, was a war about race and little else. Politics for them was another way to talk about race, identify race enemies, and destroy and conquer them in turn. It’s a repellent view of the world and of humanity and places every person as a member of identity groups and diminishes all in that way. This is pigeon-holing to the nth degree. As a youth, this was described to me as “stereotyping” and was something to be avoided as a serious personal failing. This has been turned on its head in today’s America where those who are race-blind, that is those who care only about character, personal quality, and achievement and not about race or identity are considered dinosaurs behind the times. It is important to note that the foundation of Martin Luther King’s message was that we all ought to be race-blind and only look upon others for the quality and contents of their character and not the color of their skin. Now, this essential American message is forgot? It’s a tragedy. Well, the times they are a changing, certainly; but the times they are broken, specifically for this reason, and some others, as well.

This Nazi worldview of understanding individuals merely as race-persons rather than as individuals who are members of a nation, as individuals with legal protections and rights, was (and still is) a gross, simplistic way to nullify civilization (German as well as every other), place international relations in a character not at all political, and exit the challenges of political maneuver and replace it with a psychotic child’s view of anti-civilization. Certainly, the lesson of history in this case is that anti-civilization and the vile culture that fuels it must be opposed by civilization and a culture of individual rights and freedoms and laws. It is an essential conflict, similar to that of “good versus evil,” and that is truly what it is.

Our country has extraordinary challenges. No one could deny this truth. Most strident of all is the contagion of violence (often with guns wielded by lunatics) that shatters our national peace and brings fear and horror to every decent person, American or otherwise.

This day, August 31, 2019, another gun-toting homicidal maniac committed mass murder in Texas. Apparently, a traffic stop unraveled into a murder spree, at least according to one outlet.

While every American who hears of or reads about or knows somebody involved or is a witness to or victim of such a horror is affected deeply and horrified beyond words—we all pray a prayer (even agnostic prayers) for the victims, the swift capture or neutralization of the perpetrator(s), and for the country, too.

This grotesque Nazi worldview of race race race is not limited to those troubled people in our country alone. DailyMail is considered the most widely read newspaper on the planet via the internet. Look how they stir the pot, play into the hands of the race-obsessed revolutionists, and add further fuel to this fire of American self-doubt, and the overturning of civil society and the political system into a pathetic new Nazi playland.

In our navel-gazing troubled culture of race race race all the time every day every hour and amid doubts about our national value fueled by ignorance and revolutionist sentiment then ramped up further by failed politicians and lunatics, fake journalists reporting on these nightmare events becomes a political event in itself.

I tell you this, loud, there is no black culture, there is no white culture, there are no race divisions in the United States other than those fostered and promulgated by revolutionists and the ignorant. There is only American culture in the United States—one to which every citizen of whatever color contributes. The revolutionists of the left desire to destroy this concept and bury it at the bottom of the trash pile of history, though history shows that this is the essential binding element of our country. Destroy the binding and the country sways and totters like a bad Chicago sky scraper. This unity of identity is the core of the country and without it, well . . . next stop Berlin.