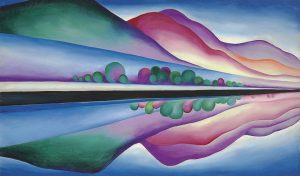 Our son is quite gifted at puzzles, especially of a certain sort. We were settled in a hamburger diner near Lake Wenatchee in Washington State waiting until our food arrived. Scattered across the plastic gingham tablecloth were a number of wire puzzles, enlarged using wooden blocks and bent steel, with which the patrons could amuse themselves. Our son, who is naturally restless, began manipulating the toys. While we sat perplexed, our son quickly made his way through the assortment of puzzles, picking up each one, manipulating each with a flicker of interest. He disassembled and then reassembled them, methodically working his way briskly through the offering. Meanwhile, my wife and I stalled and finally stopped, as it was more fun to follow, somewhat astonished, our newly adopted Thai son, as he breezed his way along.

Considering this, I asked my son sometime not long ago how it was that he had solved those wire puzzles so quickly, while they seemed an impossible quandary for most of us.

He said, “most people only try to solve the puzzle one way, while I try it one way and then try it the next.”

In fact, I did not understand the puzzle well enough to appreciate that I had been trying the same maneuver, over and over. I was like that fly pounding its head against the window because he didn’t understand a window. My son, obviously, was a fly who could see the difference between an open and a closed window.

On the other hand, when my son needs help with a schoolwork question, I can often suggest three or four answers. (Okay. One or two might be “iffy.”) Admittedly, there can be a problem of picking the answer which the instructor deems correct. (This was a pet peeve of mine throughout my schooling.) My perceptive son usually insisted that in order to use my answer, we must find it somewhere embedded back in the reading – or he must remember that his teacher had said this. This worked fairly well. The interchangeability of ideas, how they might come apart and fit back together, comes easily to me. Not so to him. Different people solve different puzzles.

At Camden Clark pool I know this fellow who swims very fast. I call him Rabbit while he calls me Turtle. Today I caught him out of breath at the end of his lane. “Hi, Rabbit,” I greeted him.
“I swim very fast so that it’s over sooner,” he averred.
I replied, “I swim very slow so that it doesn’t seem to be happening at all.”
I think we are finding common ground.

Common ground, like gold,
is where you find it.
Common ground has a look
different from other soil.
It’s rather like the left side of the holler
discovering the right,
or a bee discovering the flower,
a stream finding its bed,
or a fire leaping to its wood
with the comforting sound of puzzle pieces
snapping into place,
to leave our faces glowing with recognition,
as if the winners at hide and seek.

I was jiggered by another example of the mental diversities, when rather pressed into an evening’s adventure in an escape room. Inside the room were clues, which gave keys to boxes which contained the needed objects or boxes which held more clues. The first thing to do was to search the room for clues. We all took an area, searching against time. I found no clues while my wife found several. Then when the wife scoured my area, she found a couple more. How could I have missed them? They were so obvious. And then when we did have the clues, they suggested nothing to me. Eventually, I just sat. I was impeding the movement of our more effective members. Maybe something would come to me.

It didn’t. For some reason or another I am oblivious to the many details in my environment which, if I had noticed them, might suggest something … to someone else! But I find myself dead in the water. There are many other areas in which I suffer likewise. For example, I love music and took up the guitar. But the notes suggested nothing further to me. So I stopped playing.

This has been reassuring in its way, for I’ve puzzled over the years, as to exactly why I had felt such an urgent need to quit the field of medicine. This had cost me quite a bit both in stature and as an investment. I had no trouble with the school work, but when we reached those third and fourth clinical years I had that same anxious feeling when what I had learned would not manifest itself in my performance. My mind was like a colander. I’d pour the knowledge in which at performance was missing. I missed broken jaws, basal cell carcinomas, wildly elevated glucose levels in a diabetic… While, in general, I could speak very succinctly about what was going on. I missed the details, and when I did see the details, they suggested nothing to me. What knowledge I’d acquired wouldn’t seem to attach to the actual world of clinical practice. As a nascent doctor I was dead in the water. Patients kept rolling in and I had nothing to offer, save staring, hoping that something would come to mind. I joke that I’ve probably saved more people by quitting medicine than a lot of doctors have by continuing.

I had a roommate once,
who kept big pet lizards under a heat lamp
in the basement’s former coal bin
by a corner window
which had served as the coal chute.

As soon as the reptiles grew warm and animated,
they’d end up out on the lit periphery
where they’d cool and go stiff.
Daily, he’d have to collect the reptiles
to move back under the lamp.

I’ve pondered for some parable,
some life-lesson in this.
It’s an interesting situation
for which I can’t
find
the other sock.

Football was the same way. I decided once to read an entire book about the game, in order to have something intelligent to say over the holidays. It did no good at all.

On the other hand, once I became involved in the theater, I felt enormous confidence as a director (and had quite some success – in a small pond. In fact, my two friends and collaborators believed I showed “genius”.). No matter the script or its quality, I felt I could take it on and make it better. The playwright cleared the narrative path, and I put in the possibilities and understructure. I was usually a successful collaborator, sometimes very much so. I resisted any impulse to urge a re-write, as I wanted to see just what could be done with the creature undomesticated. It was an interesting challenge; my sort of puzzle.

Try Not to Promote Anything that Does Not Have Measured Results

“For gravity is all around them,
for those who have the tongue to provoke it,
and the skin to feel.”
– Eldon Cene

Good advice for the poet:
let them discover you
like a personal theory of gravity.

The measurable results are inside.
You must open the poem.
Mix the contents with thought.
Swallow. Lie down.

Relief should come
in 10-20 minutes,
and the personal changes arrive
in 7-10 business days.

People respect others with skills. They respect competence. I noticed this when I fled one area of incompetence for another in which I demonstrated skills. In fact, if you want to attract a following in this world, just practice what you do well. Do it, and they will come. Perform poorly, and they will leave. “People love a winner,” is the common maxim. But, in truth, they admire competence, and they detest winning without competence. People do not admire happenstance much nor cheating at all. So, it would seem that if a person endeavors to be a success in life, they should honor and exploit their raw intelligence—that simple aspect of the mind that spies opportunity.

Perhaps we could view the mind as a house, and our raw intelligence as the windows and doors … those openings where we can view the new and different and alter our thinking and actions to exploit what we see. There are many windows and doors and ways in which a home may be sited. Our raw intelligences are likewise. But I would suppose, in a like manner it would be prudent not to disparage our walls. It may well be that those areas in which we fail and fall on the dumb side, have their value also. This may be where our dumb animal side follows tradition. For example, I often wonder how many more bright ideas our civilization can withstand; how many more windows our culture can sustain? Marxism, the Global Warming hoax, the ‘sexual spectrum’, and the inability of our current Supreme Court Justice nominee to explain what is a woman, due to the inexplicable complexity of the notion. Everything needs experts, is what you get when you have ‘cooked’ intelligence, and especially overcooked. Oftentimes, intelligence is best taken raw.

As a Golden Years addendum, I am suffering the impression that my writing has improved even as my memory has failed. I must pick about for words more, but the insights I work to describe come to me more fully and often. It’s as if the brush were being cleared or the tree were being trimmed so that the structure and shape of whatever wisdom I had struggled to acquire reveals itself more plainly. My raw intelligence is changing.

Or perhaps it’s just pleasant to think so.

Words begin acting strangely before they leave.
Often, words with whom I have worked regularly over the years,
seem a little off of a morning. They seem suspect,
as if they have arrived misspelled,
but I’m not sure. They look a bit queer.
Or they wander off from the tip of the tongue,
and when found in a book,
can’t account for their absence.
And, as they trouble me,
I write them down several times and stare, leaning back,
like a professor at his blackboard.

Counselors might caution that there is no problem,
and that this will happen from time to time
in a relationship—with anything.
But it’s like a stranger were to appear and insist
that he is my brother, and I respond,
“But you don’t look like my brother.”
And then he would turn to the side, and I would say,
“Well, maybe so.”

PrevThe Girl Behind the Lost Window
In King Solomon’s HouseNext