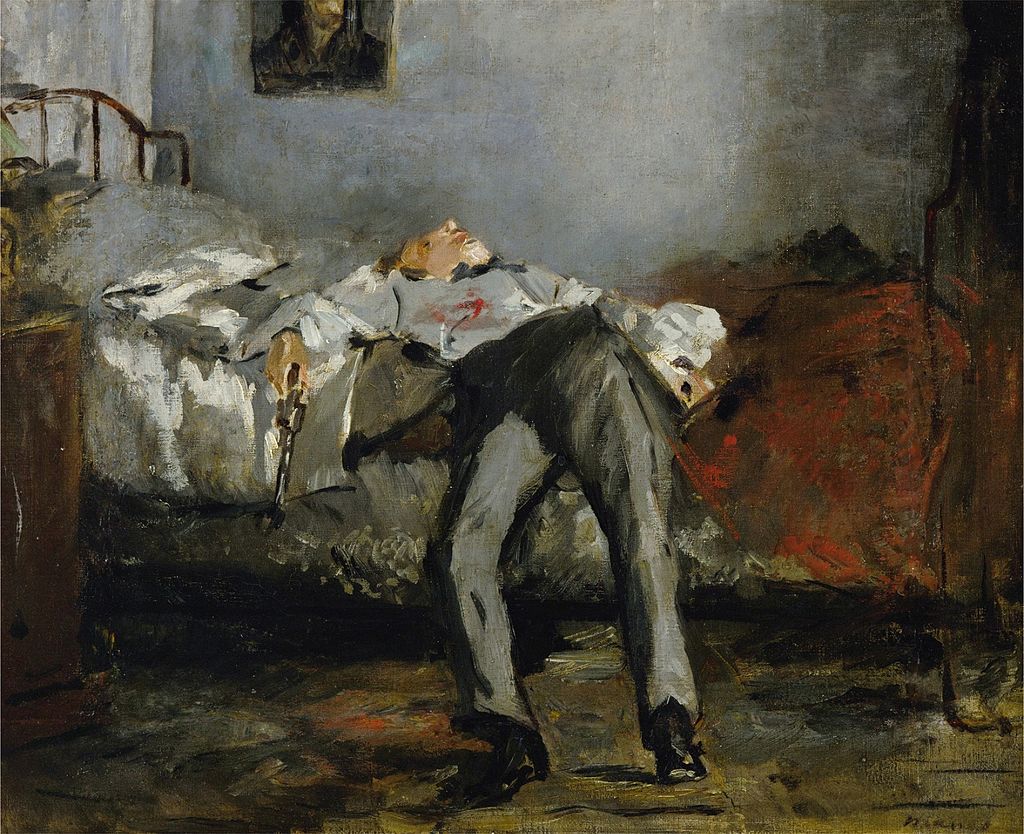 Having come home from work, Ruben had barely settled himself in his living room, ready to watch the news on the TV, when the telephone rang.

“Waiting for Sara to cook a meal, about to watch what I’m sure is going to be depressing news on the TV. Why? What’s up?”

“Oh, nothing much. Just finished polishing up some short stories and I’d like to run them by you, see what you think.”

“Oh, yeah, definitely,” Esteban peaked up. “When would be a good time to come over?” He really enjoyed his friend’s literary output, more so than any other living writer.

Read more in New English Review:
• Statue of Liberty
• Shored Up
• Self Help Poems 35, 41, and 45
• Threnody for My Grandfather and On Bouguereau’s Pietá

“Up to you. You know me; I don’t have much of a life now. ‘Matter of fact, you could come right after dinner if you like. I’m not going anywhere,” he joked. His illness had for months turned him into a homebody.

At dinner, Ruben told his wife, “That was Ruben who called earlier. He finished a short story or two and he wants me to come over and look at them.”

“His voice didn’t sound too good.”

“Didn’t you see him a couple of weeks back?”

“Yeah, thereabouts. He still can’t get around none too good.”

“You really should drop by him more often, you know. Help him out with stuff.”

“Yeah. You know, you’re right. You’re absolutely right! I think I’ll drop over at least once a week from here on out.”

“Why don’t you call him back after dinner and ask him if you can pick up something for him from the store? And take him some of the food that I just made.”

At about 8PM, Ruben drove up to his friend’s modest home. His mailbox had the street number and Esteban’s last name: Lamolinara. Esteban Lamolinara. It had a nice ring to it. With a name like that, you just had to be a writer. Or a scientist. Or a politician. His own name? It was Garcia. Blah. About as bad as Perez. There must be five million Garcias in the world. And 10 million Perezes. But Lamolinara? Esteban Lamolinara? There could only be one.

“Come in!” Esteban shouted from inside after Ruben knocked at the door. He found him by the fireplace, starting a fire. “Have a seat.”

They sat at opposite sides in front of the fireplace, sinking into big cushioned seats, and exchanged pleasantries. Ruben relayed his wife’s dish and her offer, while trying not to show how surprised he was at his friend’s deterioration.

“Oh, that was nice of her. I’ll call her if I need anything. Anyway . . . I finished some stories the other day, and I polished them off earlier today. I thought you might like to read them.”

“You know it! I love your stuff.” It was true. Ruben was an avid fan of his works and had more than once bewailed the fact that his friend’s novels and short stories were not better known. “Have you submitted them yet to be published?”

“No . . . ” his friend smiled, wickedly. “Not yet.” He handed the first one over to Ruben. By the width of the papers, it was obviously a short story. There were others on the small table by Esteban’s chair.

As usual, he instantly became captivated by the story, but more than that, by the style of writing. There was something about the way he wrote that enticed one to want to read more. With some writers—Faulkner, for one—you have to struggle to get through a paragraph, with others it is as smooth as spreading warm butter over bread—and just as delicious. Soon, he was chuckling.

After a while, upon finishing, he looked up at the author, smiling.

“You liked it,” he smiled back.

“Oh, yeah! Up to your usual standards. And those characters! Cheez! Where do you come up with these guys?”

“Heck if I know! They just jump out of my head.”

“Yeah, yeah, that’s right! Hey! Well put. I’ll have to use that!” He took another. “Here’s a second one.” They exchanged sheaves of paper and soon Ruben was lost in the story. A couple of times, he laughed so hard that tears fell from his eyes, to the writer’s amusement, and he had to compose himself in order to continue.

“I won’t ask if you liked that one,” Lamolinara told him after Ruben finished reading the story. He took the papers from his friend’s hands. “And here’s the last one.”

The last one did not elicit a smile, much less a laugh. It was an account of a family’s tragedy. Several times while reading it, Ruben made a face. On finishing it, he exhaled through pursed lips and gave it back.

“Cheez, I wish that you hadn’t given it to me at the last. It just wiped out all of the good humor that the first two stories put me in.”

“Well, in a way, it’s fitting, considering the circumstances,” he said, taking the papers back and putting them in a stack on his lap, where the other stories now laid.

“Yes,” and with a flick of his hand he threw the three stories into the fireplace.

Ruben gasped and started to reach for them, but he checked himself. He did not want to burn his hands, and he knew that the author had to have copies anyway, so he wondered at the gesture.

“And . . . why did you do that?” he kept glancing at the now burning manuscripts.

“I don’t understand. Revenge? At whom? And for what?”

“OK, listen to me and please don’t interrupt.”

“You know the difficulties that I’ve had in publishing my works. Only two of my novels and six of my stories have ever been published. I’ve been blacklisted by the publishing companies, first, because I’ve written stuff critical of the Communist regime in Cuba and the media is firmly in the hands of leftists who faint in an adoring rhapsody whenever they are exposed to the dictator and, second, because I’m a Cuban exile and you know with what racist hatred the liberals see us. You saw the cartoon that was printed in the Washington Post advocating that the US engage in ethnic cleansing against Cuban-Americans.”

“Anyway, you know all this. We’ve talked about it often enough, it’s nothing new.”

“I’ve always said—and I’ll say it again—” he continued, “that the most bitter, the most vicious fights against the Communists have been, not with guns and bullets, but with pen and paper.” He paused for breath. “But the conservatives have always been too stupid to realize this, even when it was pointed out to them. Their stupidity is truly breathtaking.”

“But, anyway, not all of my stories have dealt with the Communists, as you just read,” he added as an afterthought, motioning to the fireplace. Then, he continued.

“So it would make sense for the Cubans in exile to support any writer who takes up arms on their behalf—our behalf,” he corrected himself. “Actually, Cubans should support any Cuban writer. We’ve always been a small country, so we have few outstanding, famous people. But, noooo.”

“We Cubans love our poets and writers and scientists,” he again smiled wickedly. “That is to say, we love to see them starve to death.”

“The history of Cuban literature is one of writers dying in oblivion and starvation and once they die, then and only then do we honor them and buy their books: when we’re absolutely certain that it can’t help them: Heredia, Martí, Villaverde, Arenal, Huidobro, Padilla.”

“Now, look, Esteban! I have to interrupt! What you’re saying is true to a large degree, but it’s not just Cubans. The same is true for all South Americans, from Chile to Honduras. It’s not just us.”

“Fine. You may be right, but it shouldn’t be true of Cubans at all. Not in our present circumstances. Definitely not.”

“Anyway . . . you and I—and lots of other people as well—have often talked that it’s a real shame that certain writers that we enjoy did not produce more works. Or whose other works have totally disappeared from sight. Like Thorne Smith.”

“Now . . . there is no question in my mind that at some point my writings are going to be recognized as masterpieces. I know it. I can see it objectively. I can do that, I can step back and see my work objectively. I also know that when it happens, it’ll be after I’m dead.” He shrugged. “That’s the way it usually goes.”

“I’ve destroyed all of my notes and all of my unpublished works and all traces of them.” Ruben gasped. “But, I’ve also left records to anyone who might be interested in the future that my literary output was ten times what was published. And why I destroyed them.”

“And you . . . you’ve read those works. And you can testify how good they all were.”

“And that, that’ll be my revenge against all of these unappreciative bastards.”

Ruben sat in his chair, motionless, expressionless, at the revelation. Finally, he spoke up.

“You’ve been casting pearls before swine.”

Esteban nodded. “That sums it up, I guess. Yes. Well put.” he smiled.

“But that doesn’t mean that you’re totally unappreciated.” He only shrugged in response and said nothing more. “Well . . . hopefully, you’ll change your mind and recreate those works. You can do it. Josef Conrad did it. And Lawrence of Arabia, I think.”

Ruben’s shock at his friend’s news of destroying his writings was nothing compared to this new revelation.

“You see, I couldn’t trust that you’d carry out my wishes after my death and destroy my works,” he smiled. “Not after what happened to Kafka and Virgil.”

“Esteban . . . please don’t,” was all that he could utter. In truth, he saw the logic in his friend’s decision.

“I’m sorry, Ruben, but I’ve made up my mind. And I’m only sorry if it causes you distress. Really, I am. You’re a good friend.”

“I’m tired now. I need my rest. Please give my regards to Sara.” He got up and shuffled over to the door.

Ruben got up and accompanied him. At the threshold he opened his mouth, but Esteban just shook his head with a weak smile. They shook hands and parted.

The next day Esteban Lamolinara was dead, by his own hand. Ruben was truly surprised; he had hoped for more time. And that Esteban would have changed his mind.

The local newspaper picked up the story and Ruben was interviewed. The news was transmitted nationwide and became a brief sensation.