Rock Around the Clock: Dance Mania of the Left 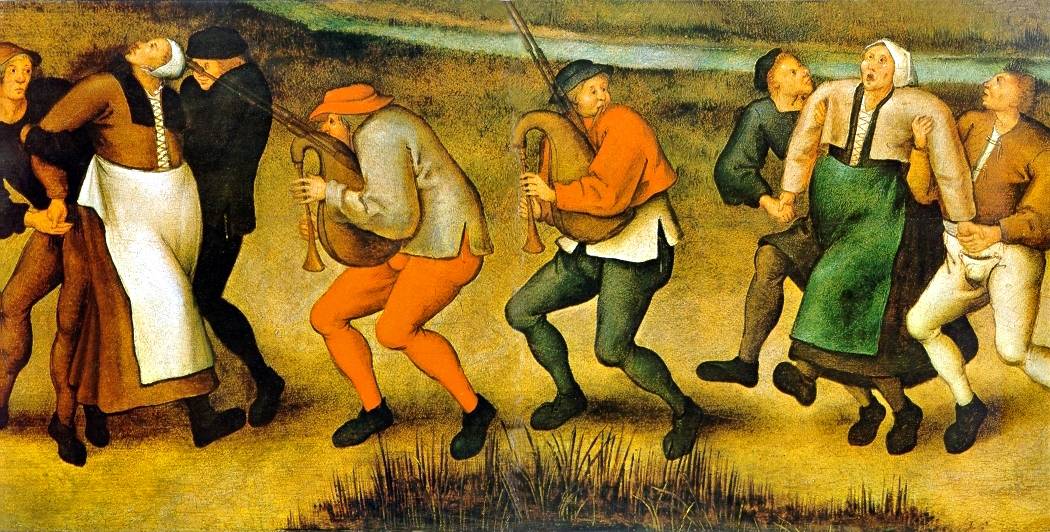 Ancient historians generally concurred with a belief traceable to Aristotle that actions are signs of character. That is, people behave in certain ways because they are the sort of people they are. The historian’s job, they believed, is to relate action to character over time. For such seminal thinkers, human nature remains constant and predictable. Thucydides states near the outset of The History of the Peloponnesian War (translation by Rex Warner) that

It will be enough for me, . . . if these words of mine are judged useful by those who want to understand clearly the events which happened in the past and which (human nature being what it is) will at some time or other and in much the same ways, be repeated in the future.

So, for example, Titus Livy, writing about the early history of Rome and working more than 400 years after Thucydides, also believed in the constancy of human nature, and this allowed him to construct a moral framework out of seemingly unconnected past events.

Read more in New English Review:
• A Review of ANTHEM: The Graphic Novel
• Did Defector Intel Change Trump’s Strategy?
• Strains of a Nation

Can we use this approach to make connections between certain behaviors of our own past and contemporary exploits? For example, does the comportment of people of the 14th and 15th centuries correspond to any current brand of theatrics? Our delight in the tales of say Chaucer or Boccaccio clearly shows that this must be the case. We see in the characterizations and plots of these authors, resemblances to modern vices and virtues, loves and hates, jests, frauds and depravities. To some extent then, L.P. Hartley’s opening words in The Go Between, is only a half truth: “The past is a foreign country: they do things differently there.” Yes, we did some things very differently even within living memory. That said, underlying consistencies of behavior over time help us to comprehend the past. If this were not so, history would seem a jumble of freak, disparate occurrences. And the past is always on the prowl for beneficial or malevolent sequels: As William Faulkner put it: “The past is never dead. It is not even past.”

But what of some of the more, to us at least, lunatic and absurd behaviors of pre-modern times? Are these replicated in the 21st century forms of mindlessness?

Here is how Barbara Tuchman in A Distant Mirror:The Calamitous 14th Century describes what she calls the dancing mania:

In the Rhineland, . . . . a new hysteria appeared in the form of a dancing mania. Whether it sprang from misery and homelessness caused by heavy spring floods of the Rhine that year, or whether it was the spontaneous symptom of a disturbed time, history does not know, but the participants were in no doubt. They were convinced that they were possessed by demons. Forming circles in streets and churches, they danced for hours with leaps and screams, calling on demons by name to cease tormenting them or crying that they saw visions of Christ or the virgin or the heavens opening. When exhausted they fell to the ground rolling and groaning as if in the grip of agonies. As the mania spread to Holland and Flanders, the dancers appeared with garlands in their hair and moved in groups from place to place like the flagellants. They were chiefly the poor—peasants, artisans, servants, and beggars, with a large proportion of women, especially the unmarried.

The dancing hysteria reappeared from time to time for another two hundred years or so. John Waller, author of The Dancing Plague, describes some of the symptoms thus:

In 1491 several nuns were ‘possessed’ by devilish familiars which impelled them to race around like dogs, jump out of trees in imitation of birds or miaow and claw their way up tree trunks in the manner of cats.

Chronicles relate that in Strasbourg in 1518 a dancing craze consumed about 400 men, women and children, causing dozens of deaths. Some of the possessed would die from heart attacks, strokes, or exhaustion.

Various theories have been proposed about the sources of such bizarre performances. In an article in The Lancet, John Waller rejects the possibility of poisoning induced by chemical products of ergot fungi. He argues that the mania was caused by “stress-induced psychosis brought on by a strong level of superstition allied with disease and starvation.” According to Waller the spread of these symptoms through a population occurs where “there is no viral or bacterial agent responsible for contagion.”

The now well-attested and aptly-named, “Trump Derangement Syndrome” often presents in forms of non-stop dance forms and animalistic howls and fits of screaming. Academics, students, Hollywood celebrities, and media opinion-formers and personalities, all show the signs of a mania with no obvious viral or bacteriological responsible agent.

For some of us, this is part of our daily dose of amusement. The well-fed, often very much overfed exhibitionists congregating in radical feminist pageants are part of our very own circus entertainment, tinged like the Roman variety, with a frisson of horror. Think, for example, of a newly-minted member of the US House of Representatives, arms flapping in imitation of a seagull’s wings, foaming out a dose of daily drivel wondrous to behold.

Or more generally, observe with incredulity the mob mentality infesting antifa with their cavorting spasms of viciousness, the confidence tricksters of Black Lives Matter and something called the “#metoo movement,” and in Europe at least, the legions of adherents of the religion of peace (although the sources of this particular derangement are not in doubt). And this last-named tendency really does show that the past is never dead.

Yet, none of the participants of these loose assemblages of near insanity suffer the atrocious living conditions of the Middle Ages. Is there a link between such psychotic behaviors separated by hundreds of years? It is as though the medieval dance enthusiasts have been resurrected but now with ideological sustenance. Perhaps, it is just that mass psychogenic illness endures as a part of the human condition, flowing unchecked along the river of history.

One of the clearest indications that we are witnessing today a variant of the 14th and 15th century dancing hysteria is the behavior of the frothy-mouthed climate alarmists. The sources of this hysteria are many and come together as a perfect storm generating fear and alarm. The most extreme can be seen defenestrating the cuddly toys they have been presented with on admission to tertiary-level education, in tantrums of some deeply chthonic etiology.

These deeper causes have an ancient lineage; elites spreading anxiety in order to maintain some control over a wayward population. Nowadays, of course, these elites include academics, media worthies, tech company operatives high and low, and bureaucrats employed by the sometimes tyrannical administrative state. And we can add, those who are in it purely for lucre with no necessary ideological perspective – the “troughers” as James Delingpole has dubbed them. They must need, or feel they need, either for profit or ideological control to “menace [the populace] with an endless series of hobgoblins” as journalistic gadfly H.L. Mencken once put it.

Meanwhile, real issues of existential proportions, such as the ongoing attempt at world domination by the religion of peace, or the attempt to stifle freedom of speech and thought by our home-grown nomenklaturists are sidelined or ignored completely.

The carnivalesque demonstrations of climate activists and their minions are not unlike those acted out by our benighted forebears. And how do the mental health experts deal with such alarmism? Answer: by promoting it. The American Psychological Association (APA) itself clinically diagnoses the “damage” done by climate change, and in so doing, encourages hysteria. Recently released APA reports on “Psychology and Climate Change” not only indicate unquestioning acceptance of the highly questionable research, they demand that the spread of this anxiety-producing fad be clinically addressed. The website of this august institution helpfully provides links and references to multiple one-sided articles whose focus and intent appears to be disseminating anxiety. So, by assenting to the widespread media fear-mongering, they are helping to promote mental distress.

Therefore, any portion of mental illness they help to foment is partly iatrogenic, defined by the online Merriam-Webster dictionary thusly: “induced inadvertently by a physician or surgeon or by medical treatment or diagnostic procedures.”  The experts at APA are helping to spread alarm and anxiety. This is surely iatrogenic; although we cannot conclude that it is inadvertent.

Children are, of course, highly susceptible to this form of abuse, as has been amply demonstrated recently by the antics of a Swedish teenager who has been pushed forward to spread alarm amongst a new generation of useful idiots. This girl’s own mother acknowledges her, uhhm, mental difficulties (in this way enhancing her victim status—always a useful tactic), but since she can “see carbon dioxide with her naked eye,” we really must believe her.

It seems that elements within the West’s ruling elites and their media superstition spreaders engage in and promote a contemporary version of the dance hysteria, confirming that the ancients were not wrong. Perhaps this silliness will eventually fade, just as did the medieval dancing craze. It will die from exhaustion. Of course, when the anti-Trump exertions, or climate catastrophilia (yes, they love it, you know they do) or any of the other invented hobgoblins have run their now tiresome courses, newly encountered manias will become newsworthy. These will conceivably dribble on in the dubious discoveries of what remains of the legacy media long after we and they have handed over our plastic rectangles to the ferryman.

PrevThe Hamlet Castle
Buddy Bolden, the Blues, and the JewsNext