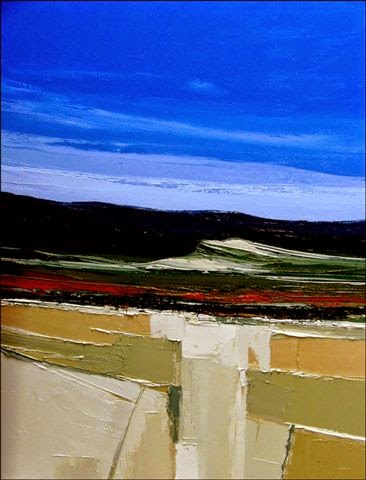 I love these cloudless September mornings

When all is clearly defined as in a well executed woodcut

But also saturated with bright colours no woodcut could achieve.

The twigs on the bush by the hedge are motionless

And stand out against the unbroken azure,

For such breeze as there is, is the slightest of breezes.

The cloudless blue stretches from horizon to horizon

And there are no shadows on the bright green of the meadow.

The early morning chill has disappeared, the dew has vanished,

All will soon be as warm again as at the height of summer.

All seems fixed, secured, yet, under the fixity,

The sense that it will not last.

The late Autumn storms loom when the leaves will fall

And the winds strew them on the now pristine lawn.

But for now the distant wooded slopes stand out clearly,

And then, above them, stretches the unbroken blue

That seems limitless. Light gleams from the club

Of a golfer practising his swing. In the distance

Every pinnacle on the cathedral towers is clearly defined

Pointing heavenward, though the distant blue

Makes them seem curiously earthbound as they rise

As though they are telling us earth is our home,

The only home that we shall ever know.

Oh, how I love these early mornings in September,

If only they could go on forever, but nothing ever does,

All vanishes, just as the dew has vanished from the grass.