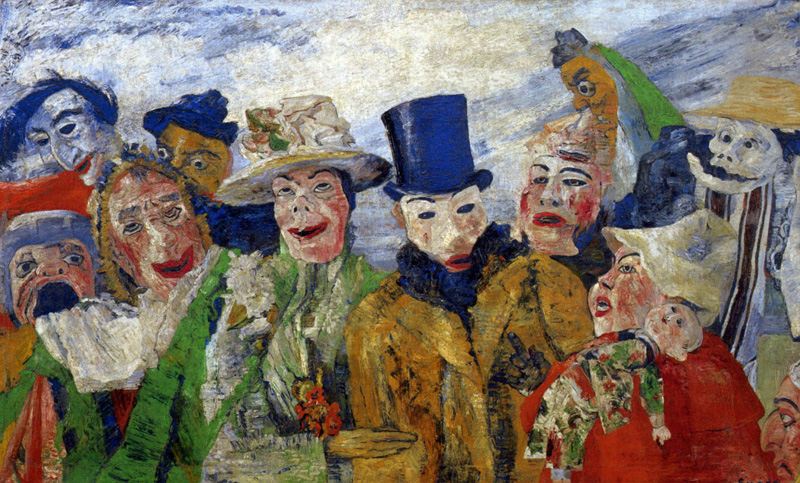 A fascinating set of experiments was conducted by the ethologist M. W. Fox and published in a 1974 monograph. The outlines of the research have been described by Robert Cialdini in Influence: The Psychology of Persuasion. Fox examined the mothering behavior of turkeys, which are known to be highly protective of their young, expending much energy in nurturing. Now, a natural enemy of the turkey is the polecat and, at the approach of this enemy, the turkey flies into a rage with much squawking and vicious pecking, etc., not unlike a social justice warrior faced with an unpalatable truth (also known as “truth”). They (the turkeys that is) even become enraged when a stuffed model of a polecat is drawn towards them. However, when this inanimate object is made to emit the recorded cheep-cheep sounds of a baby turkey, the mother turkey accepts it, even going so far as to gather the dummy polecat underneath its wings in a sheltering embrace.

Ethologists have discovered similar “fixed-action” patterns in other species, involving a variety of contexts including territoriality, courtship, and mating. Apparently, the reaction of the research subjects is usually triggered by one particular feature, not the sensory totality of the given species. Cialdini discusses, for example, the interesting fact that a robin will attack what it assumes is a rival male even if that rival is no more than a lump of redbreast feathers. A perfect stuffed male replica will be ignored if the feathers are not red.

Let us ascend or descend to the domain of human interactions. Like mother turkeys, some among us are misled by stuffed polecats, and do not notice that fakery is being employed. The religion of peace is welcomed with open nurturing wings into those areas of the world which are fortunate enough to have undergone (in varying degrees) the benefits of the Enlightenment underpinned by Judeo-Christian foundations. What is it that permits the greeters to be duped into accepting the newcomers? The clear intent of many of the Abduls-come-lately is to overthrow the enlightenment values and replace them with seventh century sharia savagery. These assailants must be making some kind of baby turkey sounds that permit them to overcome psychological defenses, which should be activated when dangerous invaders approach. Of what do these cheep-cheep sounds consist?

An old-fashioned disguise of dress works well for inveigling one’s way into the enemy camp. The recent German language movie Der Hauptmann (The Captain) tells the true(ish) story of how, in the last two weeks of the European theater of World War II, a German private named Herold, who has deserted his unit, stumbles across the uniform and accoutrements of a Luftwaffe captain. By donning the officer’s uniform decorated with an Iron Cross, the private avoids getting caught for desertion. He then succeeds in gathering a group of other deserters around him and fooling the officers and guards at an internment camp for German army deserters. The authority provided by the uniform is enough (together with some native cunning) to permit Herold to become involved in various atrocities against the prisoners. So, the lesson here is if they like the way you look, you can get away with murder.

The folktale Little Red Riding Hood shows such deception has ancient, even archetypal roots. Surely, one of the lessons of this fairy tale is that evil (the wolf) does exist and that naivety/weakness can provoke evil. The wolf disguises itself as the grandmother and outwits the innocent little girl. The dialog is proverbial and a portent.

What big hands you have!

The better to hug you with.

What big eyes you have!

The better to see you with.

What a big mouth you have!

The better to eat you with.

And with that the wolf leaps on the little girl and eats her up just as he has already eaten up the grandmother. And that is how Perrault’s tale ends. The Grimm brothers crafted a happier ending; a hunter kills the wolf and mirabile dictu, restores the pre-eaten individuals. But the message is the same; beware of the baby-bird sounds coming from the stuffed polecat. Evil exists and we would do well not to appease it.

Many of the frontmen of the attacking forces understand this, and also they understand how to camouflage themselves. Some wear suits and ties (i.e., the uniform of respectability) and speak impeccably, a kind of linguistic and sartorial taqiyya. This disguises their underlying goals. A well-known recent example is an influential “Swiss” Muslim academic and Oxford professor Tariq Ramadan, grandson of the Muslim Brotherhood founder, whose deliberations enthralled students, faculties and the media world alike. All went well for a time until an allegedly favorite sideline of a deviant nature of his was uncovered.

But, someone will object, many of the Sharia enforcers actually dress in seventh century garb. They are not disguised, at least by their tailors. They don’t get fitted at Savile Row, nor even off-the-peg at M&S. The vogue of their women folk is often to be swathed in medieval costume from head to toe. This sartorial habit (no pun intended) appeals to multicultural sensibilities of the guilt-ridden left. World Hijab Day, apparently observed in 190 countries, is now an important event on the fashionistas calendar. We must condescend to and usher in those seemingly less fortunate, especially those whose attire is (or at least was once thought to be) so different. So, Jihad is conducted at many levels and in diverse ways. Just like Sloppy, a character in Dickens’s Our Mutual Friend, of whom his foster parent, Mrs. Betty Higden avows, “Sloppy is a beautiful reader of a newspaper. He do the police in different voices.” Likewise, we can say, “Abdul is a beautiful reader of the Western mindset. He do the Jihad in different voices.” Our defenses are overcome not just by one feature of an antagonist, as animals appear to be, but by several features, if not the totality of their presence.

Another trick is the bogus “we are all children of Abraham” line. We worship the same God, etc. This angle fools many Christians, Jews and secularists (and those of any stripe who have neglected to do a modicum of research). No doubt, the need to find meaning in life can stretch to asserting the moral equivalence of all religions (despite the extant totalitarian nature of one of them) and the necessary covering up of 14 centuries of imperialist jihad. This ploy, amplified by sophomoric visions, piggybacks on media-distributed hoaxes that are calculated to play on the heartstrings of those whose main task in life is to feel virtuous, perhaps to make up for what they secretly imagine is their lack thereof.

According to Cialdini, one of the surest ways of influencing behavior is based on what he terms the “reciprocity rule,” which enjoins us to repay in kind whoever has done us a favor. We are obligated to repay with favors, gifts, invitations and so on, those who have furnished us with something useful or valuable. And this rule is pervasive in human culture. Anthropologists tell us that this “future positioning” has helped in social evolution. For example, Richard Leakey stated that, “We are human because our ancestors learned to share their food and their skills in an honored network of obligation.” In some cultures, obligations are repaid with an exactitude and stringency that perplexes Westerners. See, for example, the elaborate cultural expectations surrounding indebtedness in Japan as discussed by Ruth Benedict in The Chrysanthemum and the Sword. But, in general, such notions are universally understood, and thus, native peoples of say, Polynesia or the New World were presented with trinkets that they regarded as valuable, in return for granting a variety of favors.

But can anyone explain what particular trinkets we have been favored with? What gifts (in the broadest sense of the term) the warlike creed has given to Europe or the Enlightement-graced West? Clearly, inviting in and then favoring with jizya payments welfare handouts a people who (yes, with exceptions) do not necessarily wish us well, fails to follow the reciprocation rule. There is no obvious need to reciprocate since there exists no initial gift. The consent to widespread immigration arises from some seemingly untethered emotion. It does not have any objective correlative, to use the literary term loosely (since we are probably not in a play, nor even pretty nurses in a play, pace the lines from Penny Laneobjective facts which can give rise to the emotion, or ultimately to our submission. Perhaps for some, it is a reward to our subjective selves, a way out of the impasse of guilt of being fortunate enough to be born into somewhat flourishing societies in a prosperous era. Those who lay out the red carpet may be relying on these exterior adversaries to help provide subjective meaning in the apparent sense-vacuum of modern life.

Of course, those who spread Sharia in the West are ably assisted by elites who have their own cynical political motives for encouraging population replacement, and much else besides. The media, the academy and the school system present a credulous public with a perspective which undermines the critical stance of the subject population. The miseducation and resultant “worldview” of many college graduates has become a rolled-up hedgehog of clichés which protects the interior fleshy pulp from attaining a robust understanding of the open society and its newly invigorated enemies. The mother-turkey elites such as Angela Merkel and co-charlatans throughout Europe, claim to believe that people from antique lands will integrate and add value. Secretly they may fancy that this approach will wash away the sins of previous generations’ wickedness, real or imagined.

So, at the end of the day, the stuffed polecat has little need of disguise, for it is the particular vision of the anointed ones, as Thomas Sowell has so adroitly described, that allows the polecat into the barnyard, and the fox to grab Chaucer’s Chauntecleer. This rooster’s dream—“a beest/Was lyk an hound, and wolde han maad areest /Upon my body, and han had me deed,” turns out to be prophetic. The cosmic self-righteousness of the anointed, and the accompanying elevation of minority mascots undoes rational self-interest. Such a vision allows a state of grace for those who believe in it (and allots benightedness for those who do not, and who are, therefore, in sin and deplorable). The dreaming of our betters may, if left unchecked, lead to tyranny.

The turkey will be truly stuffed. Happy Thanksgiving!


____________________
Robert Gear now lives in the American Southwest. He is a retired English teacher and has co-authored with his wife several texts in the field of ESL.