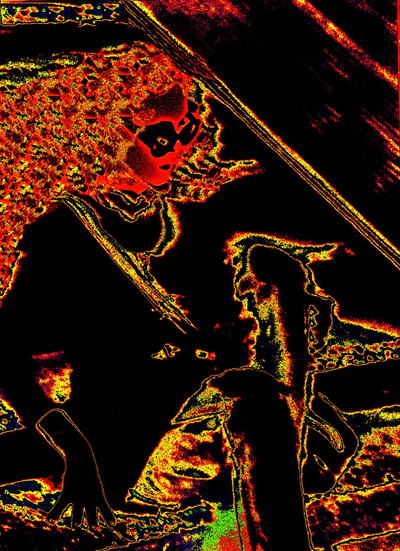 When I get home at the end of the day, I shuck my superhero costume like it was the husk of an ear of corn. I start at the neck and peel it down and off. Fine multi-colored phosphorescent hair grows on my body when I wear my costume. It’s like the costume is becoming a part of me. I gently pluck it off, and then take a long shower. The shower floor glows red, green and yellow as the last of this silky hair slides down the drain.

After dinner I work for a few hours. I accumulate and synthesize information that relates to people like me. It’s amazing how many incidents occur around the world every day that if you look beneath the surface can mean only one thing: some kind of supernatural ability. Going even deeper into these stories, I came to realize that there are a lot of problems and issues that come with having super abilities. Can you have a relationship with a normal? Should you tell your employer? Should you make money from your super ability? When should you use your powers to intervene in the lives of normals, when should you refrain? There are worse, darker issues, having to do with illness, religion and dying. Yes, we die, we get sick.

I make a living by offering advice via Skype to fellow abnormals for a fee. Last week I had a session with the parents of an eight-year-old girl who could leap very high when wearing a special pair of socks. They showed me a video of her jumping with ease over an eight-foot cyclone fence, landing softly, and then waving to them from the other side. I told them to let her have the socks, but to tell her she should only use them for good. My own parents, I told them, took all my costumes away and threatened dire things if I ever made one again. That was very painful for me. Last night I had a session with a guy from Africa who can make his hands move faster than a hummingbird’s wings. He demonstrated this by cutting all his hair off right in front of me, moving so fast I never saw it happen. One second he had long dark brown hair, the next he was a cue ball. When he was done he showed me the electric hair clipper he used. He was having bad thoughts, like wanting to pluck his boss’s eyes out. He’d never know what happened, he said. We’re having another session next week. Before we clicked off, he asked me how I thought he looked bald. Yes, I do get hit on, but I don’t mix business with pleasure. He did not look good bald.

Tonight I am doing a session with a guy named Vinnie from New Jersey. He didn’t come to me through my website. He saw me sitting on the subway steps last week and asked me what I was up to. His money arrived yesterday in my PayPal account, so we are good to go at eight o’clock. He refused to tell me what his super ability is. He promised to tell me during our session. I told him he would have to demonstrate it, or I would end the session and there would be no refund. He said not to worry, he would, but I’ve had some delusional people come to me. He was an interesting guy, so I hope he’s not playing a game, or just curious about me.

We’ll see how it goes.