The Beatles and the Dark Side of the Road 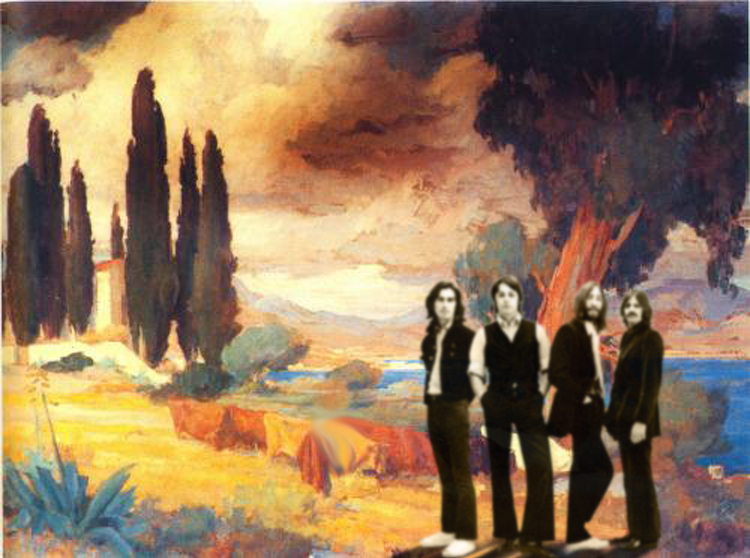 In the first verse of his poem, Annus Mirabilis, Philip Larkin writes: ‘Sexual intercourse began/In nineteen sixty-three (which was rather late for me)—Between the end of the Chatterley ban/And the Beatles’ first LP.’

It was always assumed The Beatles were the “good guys”, while The Rolling Stones were the “bad guys”, the latter being the type of rocker-rogues that parents wouldn’t want their daughter dating. Unlike the Stones, the loveable, boyish Beatles seemed to have started out wholesome but they gradually began to write vulgar, bleak songs without many fans noticing it.

In an interview with John Lennon, conducted around the time of the band’s breakup (1970), Lennon said: “Things are left out, about what bastards we were . . . You have to be a bastard to make it. That’s a fact. And The Beatles were the biggest bastards on Earth.” (The quote resurfaced in Philip Norman’s biography, John Lennon: The Life)

But when John, Paul, George and Ringo started to become popular worldwide in the early Sixties, they certainly didn’t come across as bastards. And their songs were all about ‘clean’ courtship between men and women. Songs like ‘She Loves You’, ‘I Want to Hold Your Hand’ and ‘Love Me Do’, paid homage to romantic innocence in the relatively simple lives of teenagers and young adults in love. But the lyrics and mood in their music changed incrementally from album to album. Paradoxically, this moral decline in the lyrics of some of their songs resulted in, for many, better and more creative music.

As mentioned above, their first few albums were all about love and happiness. However, their 1965 albums Help and Rubber Soul, were a turning point for the band in terms of lyrics. The new wave of songs by the Fab Four alluded to existential confusion and troubled relationships, and contained cynically pessimistic lyrics not heard of in their earlier stuff. Songs like ‘Help!’, ‘You’ve Got To Hide Your Love Away’, and ‘I’m Looking Through You’ were nothing like the starry-eyed, optimistic ditties of earlier years.

It’s also interesting to note that 1965 was a year that saw a major societal shift in the West that led to the Sexual Revolution. Despite this socially negative cultural upheaval, the top 100 hits of ’65 were arguably the greatest songs ever written and composed in pop history.

In America, heralding in the year at Number One, was, portentously, ‘The Eve of Destruction’, sung by Barry McGuire; The Bible says: ‘For they have sown the wind, and they shall reap the whirlwind’ (Hosea 8:7): The Palm Sunday Tornado Outbreak on April 13 resulted in an estimated 47 tornadoes in six Midwestern states with fatalities in the hundreds and millions of dollars’ worth of damage; Bob Dylan was called ‘Judas’, after he went electric in ’65; cannabis and LSD—used irresponsibly and recklessly—became popular recreational drugs; the beginning of the US health-costs crisis and ‘Great Society’ for black people, the latter (launched by Democrat, Lyndon Johnson) replacing the pay cheque with the welfare cheque; the breaking of the movie code with the first cinematic screening of female breasts in mainstream films (The PawnbrokerRepulsion, by Roman Polanski, a “sexually repressed” female virgin’s dreams lead to two murders.

More: the culmination of Vatican 2 and the [New] Catholic Church’s distorted teachings, thus loss of power over decadent Hollywood; unbridled promiscuity and the Pill; British theatre critic, Kenneth Tynan, was the first person to say “fuck” during a talk on a BBC programme; and if the “best music is played in Hell”, then The Beatles’ hits of the mid- to late-’60s were unfortunately testament to that metaphorical adage. After all, according to John Lennon, “we’re more popular than Jesus now”. What Lennon probably meant was only those with plastic or rubber souls viewed the Fab Four more popular than Jesus.

Lennon said: “Christianity will go. It will vanish and shrink. I needn’t argue about that; I’m right and I’ll be proved right. We’re more popular than Jesus now; I don’t know which will go first—rock ’n’ roll or Christianity. Jesus was all right but his disciples were thick and ordinary. It’s them twisting it that ruins it for me.” (The only ‘twisted’ disciple was Judas)

But back to Rubber Soul and the albums that succeeded it: mature, but cold, transient sexual encounters are the curious lyrics of the classic ‘Norwegian Wood’, with a possible reference/interpretation to arson, in revenge for being made to ‘sleep in the bath’; while ‘Think For Yourself’ was snarky and pointed to the ‘good riddance’ of the break-up of a relationship.

The lyrics in the albums that followed Rubber Soul continued the journey into the dark side, combined with morally good lyrics to keep their image ‘clean’. The Godless Eleanor Rigby’s lyrics say, “no one can save, all the lonely people” Really? Not even Christ?

However, by 1968 on The Beatles ‘white’ album, McCartney’s lyrics moved to the darkest side of the road. The song?: ‘Why don’t we do it in the road’. Think about this for a moment: Within five years, The Beatles went from ‘I Want To Hold Your Hand’, to ‘Why Don’t We F**k On Some Roadway’, as “nobody will be watching us”. Even the philosopher Jean Rousseau would wince in his grave on hearing the situation ethic of such noble savage sentiments.

In his book, Many Years From Now, Barry Miles quotes McCartney saying he wrote the above song while on retreat in Rishikesh, India. He saw two monkeys copulating in the street and was impressed at the simplicity of the scene, when compared to the emotional turmoil of human relationships. McCartney said a male monkey just hopped on the back of this female and “gave her one”. He added: “Within two or three seconds he hopped off again and looked around as if to say ‘It wasn’t me!’ and she looked around as if there’d been some mild disturbance . . . And I thought . . . that’s how simple the act of procreation is . . . We have horrendous problems with it, and yet animals don’t.”

Nietzsche would call this moral inversion the transvaluation of values, the instinct of the animal by following one’s passion. For the male monkey ‘on the road’, the mating act is forcibly copulating with the female (animals are not moral agents); for the human being to similarly accost a female, the act would be rape, a moral abomination. Sorry, Paul, give me the ‘horrendous problems’ of human relationships any day instead of ‘doing it in the road’.

Other songs on the ‘white‘ album were about borderline suicide (‘Yer Blues’); a pervert looking upskirt with mirrors on his booths (‘Happiness is a Warm Gun’), and the ‘whacking’ of rich people (‘Piggies’). During the year when the ‘white’ album came out, the cult leader Charles Manson, whose followers committed nine murders, said he was inspired by some of these songs. Those songs might be sinister but only a mad man like the late Manson would view them in such twisted way.

Another twisted song on The Beatles’ last album, Abbey Road, was ‘Maxwell’s Silver Hammer’. This catchy tune was about a serial killer who hits his victims over the head with a hammer. Once again: from being held lovingly by the hand and ‘she loves you’ (yea, yea, yea!) to having your brains bashed out with a silver hammer, The Beatles came a long way from the innocent bubble-gum hits of the early days. There are many more songs with questionable meaning in the lyrics, but I’ve just mentioned a selected few.

However, love them or hate them, from the bright side of their music to the dark side, there will never be a group quite like the Fab Four. Testament to this is what I regard as the greatest song of all time, ‘A Day in the Life’. The song comes from the 1967 album, Sgt Pepper’s Lonely Hearts Club Band and was banned by the then-BBC because of the ‘obscene’ lyrics, ‘I’d love to turn you on’ or drug-dreaming reference, ‘had a smoke (cannabis?), and somebody spoke and I went into a dream’. However, the virtuosity of the melody, and intermittent, tremendous build-up of the 41-piece orchestra into chaos, culminating in the most dramatic crescendo in popular music history, is astonishing. There is no song equal or better than ‘A Day in the Life’.

The beginning of the song was based on stories, Lennon read in a newspaper, about Tara Browne, the Guinness heir, dying when he crashed his car into a van; another article in a newspaper referred to surveyors counting 4,000 holes on roads in Blackburn, Lancashire. Lennon altered the Tara Browne story: ‘he blew his mind out in the car’ and made the pothole story about filling seats in the Albert Hall. Could such a classic song like this be written today, or is modern technology destroying musicians’ ability to compose and write such music?

Read more in New English Review:
• Houellebecq and the Popularity of the Crisis of Meaning
• Disbelief About Belief: Secular Academics and Religious Fundamentalists
• Hope Not Hate‘s 2019 Report on the Right and Conservatives

There is also something of Nietzsche’s Last Man about the song. Think about it: We live in a world of hi-tech corporate clones who are proxy justice warriors for the State. Many of these people are unwilling to take risks, and they’re docile, glued to their tech devices, keep warm; the days in their lives spent living in the co-work, safe spaces of Silicon Valley.

When the then lead singer of The Byrds, David Crosby, attended the recording of ‘Day in the Life’, he recalled his reaction to hearing the completed song: “Man, I was a dish-rag. I was floored. It took me several minutes to be able to talk after that.”

From hearing it myself on the wireless for the first time in the late 1960s to today, I still simply think, ‘Wow!’ as the goose bumps rise on my skin.