The Demise of Jeremy Corbyn 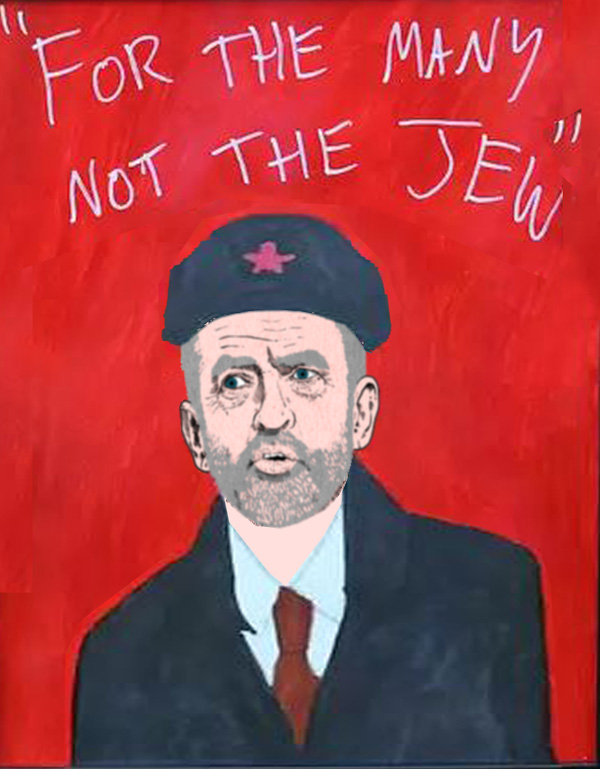 In two unprecedented, overt political statements, the highest officials for the two most representative institutions of the British Jewish community, Chief Rabbi Ephraim Mirvis and the President of the Board of Deputies, Marie von der Zyl, both issued appeals to voters to cast their ballot against Labour Party candidate Jeremy Corbyn, and issued congratulations to Boris Johnson and the Conservative Party for their victory in the December 12th election.

Ten days before the election, Mirvis denounced Corbyn as unfit to be prime minister, lamenting “a new poison—sanctioned from the top—has taken root in the Labour Party.”

Van der Zyl commented a few days after the election as follows:

This election victory is an historic achievement for Boris Johnson and the Conservative Party. We hope that the Prime Minister will use his new mandate to bring the country together, and put an end to the toxicity and prejudice which has become too regular a feature of our politics. We look forward to working with the Government to ensure that our country strives to be a beacon of inclusion and respect for all its inhabitants. When he eventually steps back, history will not look kindly on Jeremy Corbyn’s leadership of the Labour Party, where anti-Jewish racism has been allowed to run amok and some at the highest levels of the party have appeared to collude to protect antisemites. We urge the next leader of the Labour Party to act quickly to implement the steps repeatedly recommended by Jewish communal groups to begin solving this crisis and moving our politics forward.

Nothing so vividly illustrates the absolute immense gulf that exists now between Jews in the UK and the vast majority of American Jews who continue to blindly subscribe to the inherited “wisdom” of the last three generations identifying with the Democrat Party’s ever-more exaggerated mythical utopian dreams of a better world through so called “progressive” policies.

The handwriting on the wall appeared as early as 2015 following the defeat of Labour Party Candidate Ed Miliband (son of Holocaust survivors), a moderate, and the subsequent reaction of new, much more radical members of the party. Prior to this, the views of sitting Labour MPs, and Trade union members counted as much or more than the entire party membership, but the rules were changed then to allow immediate nomination rights for a new party chairman and thus allow the new and very young members a say.

Corbyn’s term in office produced a sharp lurch to the Left and by February, 2019, seven prominent Labour Party members in “safe seats” assured of reelection (only one of whom is Jewish), quit the party over Corbyn’s radical policies and mismanagement amidst charges of blatant anti-semitism. Corbyn blatantly rejected these charges and maintained a petulant, defensive, and arrogant attitude especially over criticism of the growing anti-Jewish and anti-Israel stance of many new party members.

In subsequent interviews in the press and on radio and television, Corbyn affirmed that he and the party regarded anti-semitism as an “absolute evil” and that all complaints were being dealt with through the “established channels.” These remarks fell on deaf ears as the election results of December 12th demonstrated when practically the entire Jewish community either abandoned Labour, voted for other parties, or abstained.

During the last three years, many faithful and veteran Jewish supporters of the Labour Party had encountered hostility among what many younger members regarded as “exclusive and separatist” Jewish concerns over Israel and other issues. The seven defectors were labeled “cowards and traitors” on social media amid calls to stand down and stop “boosting the Conservatives” by becoming independents.

Deputy leader Tom Watson condemned these inflammatory remarks of “treachery and heresy.” Ms Luciana Berger, the Jewish defector, cited the vituperative harassment she had received online from self-proclaimed “activists” as one of the main reasons for her quitting after no leadership action was taken. This included receiving images of her head being photoshopped onto rats and pornographic photos, letters signed by self-declared supporters of Corbyn and delivered to her office by hand, warning that she would be raped, stabbed, and covered in acid, and epithets such as “Zionist bitch.” Other Jewish Labour Party activists complained to the Human Rights commission of similar harassment.

On November 6, just a month prior to the election, Tom Watson announced that he would be standing down both as an MP and as Deputy Leader of the party, and left office on December 12, stating that his reasons for standing down were “personal, not political.” Nevertheless, they were widely interpreted as a vote of no-confidence in Corbyn and reflected not only disgust over the issue of anti-Semitism but the Labor Party leader’s absurd, ridiculous, and self-defeating policy of neutrality over Brexit to be followed by still another referendum. Additional statements by Corbyn and his close associates revealed a total lack of interest with security measures, provocative anti-Americanism, and an absurd political manifesto outdoing Santa Clause in its promises of enormously increasing the benefits of welfare, public transport, public housing and the NHS.

Corbyn’s fond endorsements over the years for Hamas, the USSR, Hezbollah, far left regimes in Venezuela, Cuba, and the IRA should have long ago made him unfit to be considered a possible Prime Minister. In the most charitable explanation of his policies, Corbyn proved to be an enabler of the rabid anti-Semitic view that flourished around him since he became leader. He continued to insult many old-time members by his participation in wreath-laying memorial ceremonies for terrorists who had committed atrocities against British and Israeli civilians. 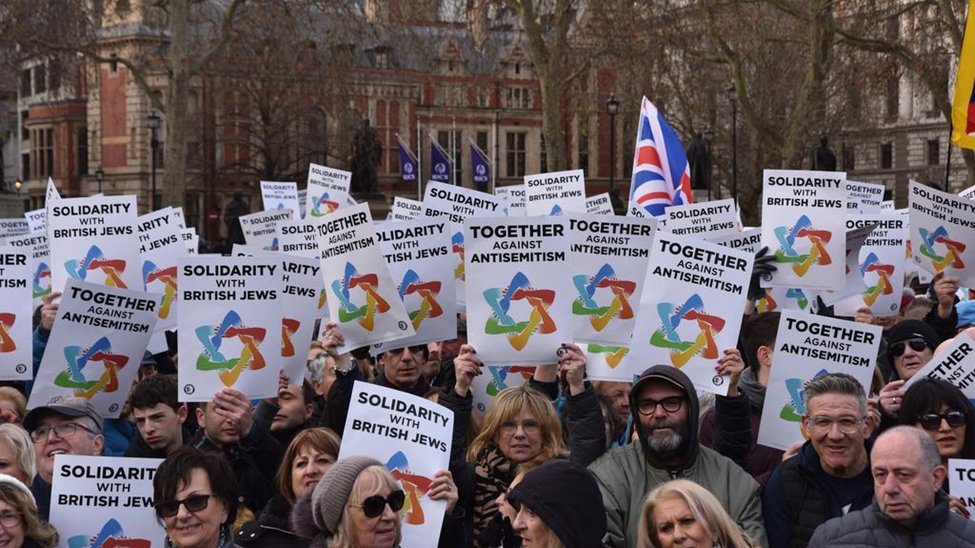 Rally in Parliament Square, London a few days before the election.

As an American Jew who now lives in the UK, it was especially gratifying for me to learn of the signed statement of solidarity with the Jewish community issued a week before the election by leading British writers, artists, actors, journalists (all non-Jews), who also took an unprecedented step in condemning Corbyn for avoiding answering the charges raised by Jewish Labor Party Members of Parliament and activists who had vainly attempted to get him to take effective action against the initiators of numerous instances of anti-Jewish (not simply anti-Israel) statements.

Twenty-four pubic figures including the actress Joanna Lumley and several of the country’s leading writers wrote to the most popular left newspaper, The Guardian, to say they would not vote for Labour because of the party’s problem with antisemitism. The signatories include novelists John Le Carré, Fay Weldon and William Boyd, the actor Simon Callow and the former head of the Commission for Racial Equality, Trevor Phillips. Their letter said the coming election for British Jews “contains a particular anguish: the prospect of a prime minister “steeped in association with antisemitism.” Even the periodical New Statesman, a traditional advocate of Labour refrained from giving Corbyn their endorsement.

One wonders what might have been different if such appeals for domestic solidarity by leading cultural figures had been issued in Germany, the US, or the UK in the late 1930s.

What reactions did all these protests and calls for solidarity with British Jews have among American Jews favoring Bernie Sanders? They and other democrats along with the notorious Muslim congresswomen elected to the House continue their shell-game scam of condemning anti-Semitism only as an extremist right-wing phenomenon. My guess is little or none at all, given the near pathological hatred of President Trump by the three most prominent Jews in the Party, notably Adam Schiff, leading the impeachment proceedings, New York’s senator, “Chuck” Schumer, and Jerry Nadler, the Chairman of the Judiciary Committee. 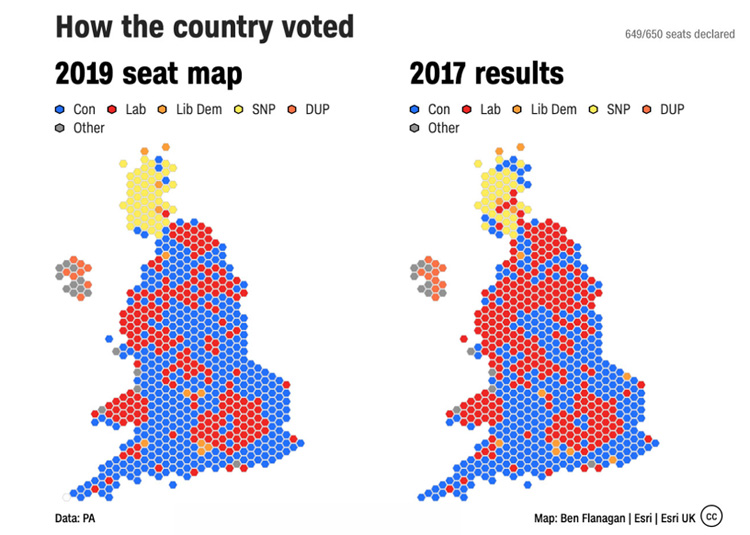 The Democrats, whose world-view still holds an anachronistic stranglehold on many Jews, have to be reminded that no ethnic vote is cast in stone, that Jewish support for Republican or Fusion candidates like Jacob Javitz and Fiorello La Guardia turned its back on the corrupt Democratic Tammany political machine in New York in the 1940s and 50s.

Only once did American Jews have the guts to stand up and give a deserved slap in the face to the Democrats in the run up to presidential elections. This happened in 1948 in spite of their idealization of FDR. Truman had been cowed by his State Department advisers to abandon the partition proposal for Palestine and were preparing to announce that U.S. preferred “international trusteeship”– meaning no Jewish state.

White House adviser Max Lowenthal urgently warned Truman that if a Jewish state were proclaimed without US recognition, Republicans, as well as the left-leaning American Labor Party, and the newly formed far left Progressive Party under former Vice President Henry Wallace (regarded as friendly toward the USSR) would lead a chorus of protests and capture the Jewish vote. The administration would pay a high political price in Jewish votes in the upcoming presidential election. Truman received crucial phone calls from Bronx Democratic leader Ed Flynn and former New York governor Herbert Lehman, warning about the electoral repercussions in New York if he abandoned the Jews. A Congressional vote in the Bronx had already unseated a veteran Jewish Democrat and Truman realized he had to make good on his original pledge of partition and diplomatic recognition of Israel.

Liberal Jews who cannot be dissuaded from their narcotic-like support of the Democrats take refuge in spurning Israel to feel comfortable with the “Progressive” camp or recall that their major interest is really in furthering what they think is “social justice,” linking it to the traditional Jewish concern for “Tikkun Olam” (Repair of the World). In this regard, they are mistaken and have accepted the contemporary Hollywood ultra-liberal Reform interpretation that Jewish tradition and the Biblical injunctions of the prophets promoted what they think are “progressive” social and economic policies, even though they must be aware that Orthodox observant Jews are hostile toward them and are increasingly supportive of President Trump.

Only a short time ago, the political complexion of Jews in both Britain and Canada was quite similar to that in the US. Both have shifted dramatically to the “right” (no longer as dirty a word as among leftist democrat American Jews). The 2019 election has redrawn the political map of the U.K. shifting the allegiance of a majority of working class voters in many constituencies in the industrial heartland and the equivalent of the American “rust belt” in the North, the Midlands, Yorkshire, parts of Scotland and Wales, from Labour to Conservative. An analogous American situation would be a Republican sweep in California, New York, and Illinois.

In spite of all the recent warnings, the rise of rabid socialist views in Labour Party literature against “capitalist exploiters, factory owners, landlords and merchants” still prominent in their literature should have reminded mature party members to also recall the distinguished role many British Jews played in the Labour movement, and the prophetic words of August Bebel, the founder of the German Social Democratic Party (Europe’s oldest modern Socialist Party), as far back as 1869 who correctly foresaw that “Anti-semitism is the Socialism of fools.”