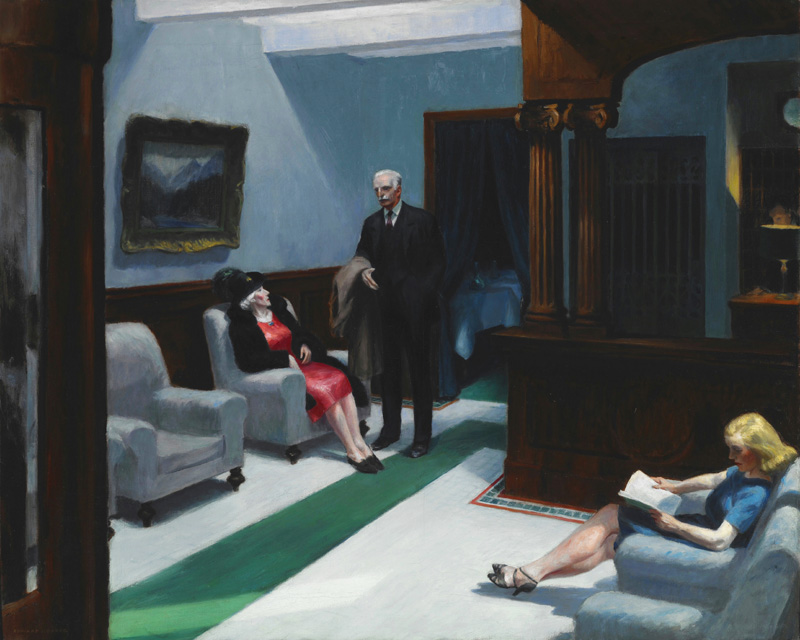 Imogen is a woman in her late twenties:

A storm so fierce that smaller planes
seem hurled to the ground; we continue—
force of habit? self defense? —to say landings.
We’re alive, though, and here, as we sustain
a wide-spread pause. The waiting room is crowded,
minimal. Rapidly, all rooms are booked,
leaving most out: clamour, press, a sheer chaos
as dollars, cards and vouchers for elsewhere
burst forth. “You have no idea,”
I overhear, “who I am and what I’m worth!”
Here are anger and astonishment
at unfamiliar scarcity of any sort,
obstacles that power can’t redress,
a postponement that cannot be undone:
predominant is a version of
“My need is greater because it is mine.”
This wilderness that is also a microcosm
makes me feel inexplicably ashamed;
better lost or stateless than at home
in such a world.

Recently, my fiancé had a stroke—
Premature, rapidly fatal. My grief
feels estranging, without defenses and raw.
As I try to make my way
in the congested room,
I see a troubled couple—
an elderly gentleman slumped
against his middle-aged wife.
She leans against the wall, unable I’d guess,
To leave even to makes an inquiry.
He seems ill, immobile.

It occurs to me there might be rooms
Not yet listed, for special cases.
I wait my turn at reception,
present my own confirmed reservation,
ask if there’s a room nearby or anywhere.
“You could name a good price if you offer
your reservation. I have a waiting list
I really should not show.”
Bribes, blackmail for the needy or desperate?
Thanks but no. I don’t want to sleep
on the floor or lean against a wall,
but I want to help the troubled couple—
not as personal sacrifice, but
somehow to extend towards them;
also to keep something within me
that must not be taken away.

I remember a plane trip from a small city
in Scotland to the Edinburgh festival.
An older plane, no perks or reserved seating,
the order of entry called, strictly observed:
handicapped, elderly, carrying small children.
No amenities, yet reckoning with human needs,
basing order on that . . .
even the memory steadies me.

The couple is truly grateful. Am I sure?
In quick succession—request for a guest bed,
streamlined necessities, extra keys.
It might have been disturbing, disruptive.
Not so: silence enough, modesties observed.
A tiny mini-bar provides mineral water for three.
A decent night’s sleep, perceived rescue.
His heart medication had made rest urgent.
“You saved his life.”
“You do me too much honor.
I was pleased to help.”
Still, the notion of honor’s entry
into daily life is welcome.
Too much gratitude? We go beyond that
and become friends—interests in common,
simple pleasure in each other’s company.

This day, I begin to think of the Scottish flight
as The Edinburgh Factor—
a prevailing order where differing
needs are acknowledged peacefully,
stranger to stranger.
And it makes for a pathway towards
the rest of life. I’m glad to make new friends,
but even if it had been otherwise—
the strain of tired strangers thrust into
sharing limited personal spaces,
an encumbrance, disruption—
I would not have regretted the choice.

Something I value that seems
threatened, something I connect with,
has not been taken away.
It isn’t a matter of power.
It’s something better. It helps to make
the fact of being human
more honorable.

I think also, I know it’s a stretch,
of a plain man’s encounter in King Lear
with the ragged Poor Tom:
“I’ll bring him the best apparel that I have.”
This from a poor man.
Here is a world I want never to lose.

Next day, in safety and peace, gathering
thoughts, impressions to send to
The Foundation,
arbiters of my modest grant,
I’m thinking of origins of theatre,
spoken not written, beginnings
of differentiation. When one
moves apart from the chorus,
does that chorus, without aggression,
forfeit its role as sole presence, sovereign rule?
It surely does not press its numbers
to attack. Though not to have been born
is the only way to avert disaster,
the chorus, within limits, tends to
preserve life: benign ordinance,
seemly precedent.

Independent of outcome or of rank,
mercy has its spacious role.
A Theban serving man stems royal decree
and with help from a kindly shepherd
rescues the infant Oedipus.
This radically alters destiny
and also defies explanation.
In the origins of ancient theatre
whatever enlightens is provisional.
We are never far from
the sustained question—
How shall we live?

PrevBad Moon Rising
Beauty and the Curse of Relentless EfficiencyNext