The Gift of the Blind Man 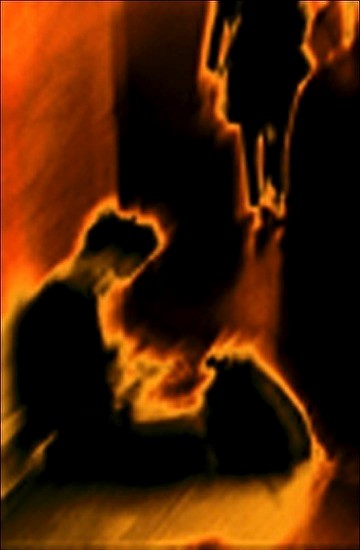 In September I began passing a young blind guy every day in Grand Central Station. He had a wicker basket in his lap with a sign on it that said, I Need Eye Surgery. I put a dollar in his basket every day, except on weekends, when I didn’t go into the city. On weekends, I lay in bed and looked at the ceiling. I had lost my job the year before and my wife six months before, and was going into the city because I had nothing else to do. It was foolish, I know, but if I didn’t get up and shower and shave and put my suit on and do my commute, I don’t know what I would have done. Killed myself maybe. There was an unopened jar of Xanax on my kitchen counter. I promised myself that I wouldn’t take the Xanax to get better, but would if I decided to get worse, a lot worse, as in suicide. I felt this gave me some remnant of choice in a life that had gone haywire.

My son was living in California, getting divorced. He and his wife had lived around the corner from us since they got married, but after Cathy died, they moved away. When they got there they separated. I had watched my granddaughter Tess, our only grandchild, grow up, and spent part of almost every day with her for the past seventeen years, dropping her off at school and picking her up whenever her parents needed help, which was often, as they both had high pressure jobs in the city. Now she was gone too. Cathy and I had another son, but we lost him when he was sixteen, to leukemia.

One day, as I was reaching down to put the dollar in the blind guy’s basket, he grabbed my wrist.

Thank you, he said.

I could have been taking money, not putting it in, I said.

I can still see a little. You come by every day around this time.

Are you really blind?

What kind of surgery do you need?

What about Medicaid? Obamacare?

It’s not approved here. I have to go to Israel.

He nodded in that odd way that blind people do.

What happened? I asked.

It’s genetic. You start going blind around thirteen. By forty it’s all dark.

How old are you?

The next day, I put a five dollar bill in his basket.

Where do you live? he asked.

New Rochelle. Where do you live?

I sleep at the Men’s Shelter on 30th Street.

I’ve been on the street since I was fourteen.

That weekend, I felt a little less sorry for myself. I got out of bed. I called my granddaughter in California. She said she wanted to come and see me. She was disgusted with her parents. I don’t blame her. They were fighting over artwork. I told her I’d come to California for Christmas, which was only two weeks away.

I started putting tens in the blind guy’s basket.

One Friday, he wasn’t there. I went to the Men’s Shelter, where one of the volunteers, a lady named Dolly with a gray Afro, told me he had gone to a funeral. I was very curious about the blind guy so I asked a few questions, which Dolly was kind enough to answer.

On Monday I asked the blind guy who died.

One of the guys at the shelter, he said.

I nodded. I didn’t think homeless people had friends.

His family had a plot in Jersey, he said. He had a wife and two kids.

He never told us.

I put a twenty in his wicker basket, which was empty.

How much have you gotten so far?

How much do you need?

There’s a clinic in Tel Aviv that will do it for free, but I have to get there and then live there for a year for follow-up and training.

I was silent, trying to calculate these costs.

I’ll get there, he said.

They told me at the shelter that you give your money away when you get there every night.

Who told you that?

What about your surgery?

They don’t feed you at the shelter. It’s just for sleeping. Those guys need to eat.

They do drink, yes.

You’ll never get to Israel.

That night my son called and asked if he could send Tess to me for the holidays. He and his wife were going to Hawaii for two weeks to try to patch things up. I said yes, of course.

When Tess arrived I decided to keep up my routine. It was that or the Xanax. I introduced her to the blind guy and then took her around to see and do different things. One day she sat down next to the blind guy and asked if she could just stay with him for the day. She was seventeen, a young woman. I said sure.

The next day the Xanax was gone.

I can get more, I said to Tess.

She looked at me, her eyes sad and hard at the same time.

Let’s go to Israel, she said. I can pay.

I’ve got money saved, most of it from you. She smiled.

You’ll have to ask your parents.

In Tel Aviv, after the surgery, I called my son. He must have been in the midst of patching things up, because he didn’t answer. When he called back, Tess was with me. I put him on speaker.

Good, I said. Tess is here. You’re on speaker.

How did the surgery go?

Not perfectly, but better. He won’t go blind.

When are you coming back?

Not for a while.

I’m sending you a power of attorney. I want you to sell my house.

You graduate in June.

It is. And short. That’s why I’m staying.

They’re working on eye transplants here. I may be the first donor.


________________________________
James LePore practiced law for twenty-plus years, then turned to writing fiction and taking pictures full time in 1999. In 2009, his first novel, A World I Never Made, was published by The Story Plant. Four others, in what LePore calls The Invictus Cycle followed. He has written a book of short stories called Anyone Can Die, a volume of flash fiction (Blood, Light and Time) that evolved from a series of blog posts, and three historical novels with the screenwriter Carlos Davis, featuring J.R.R. Tolkien and Ian Fleming in WW2 espionage adventures. His most recent books are the novellas Breathe in Grace and Eyes of a Wolf. His website is here.