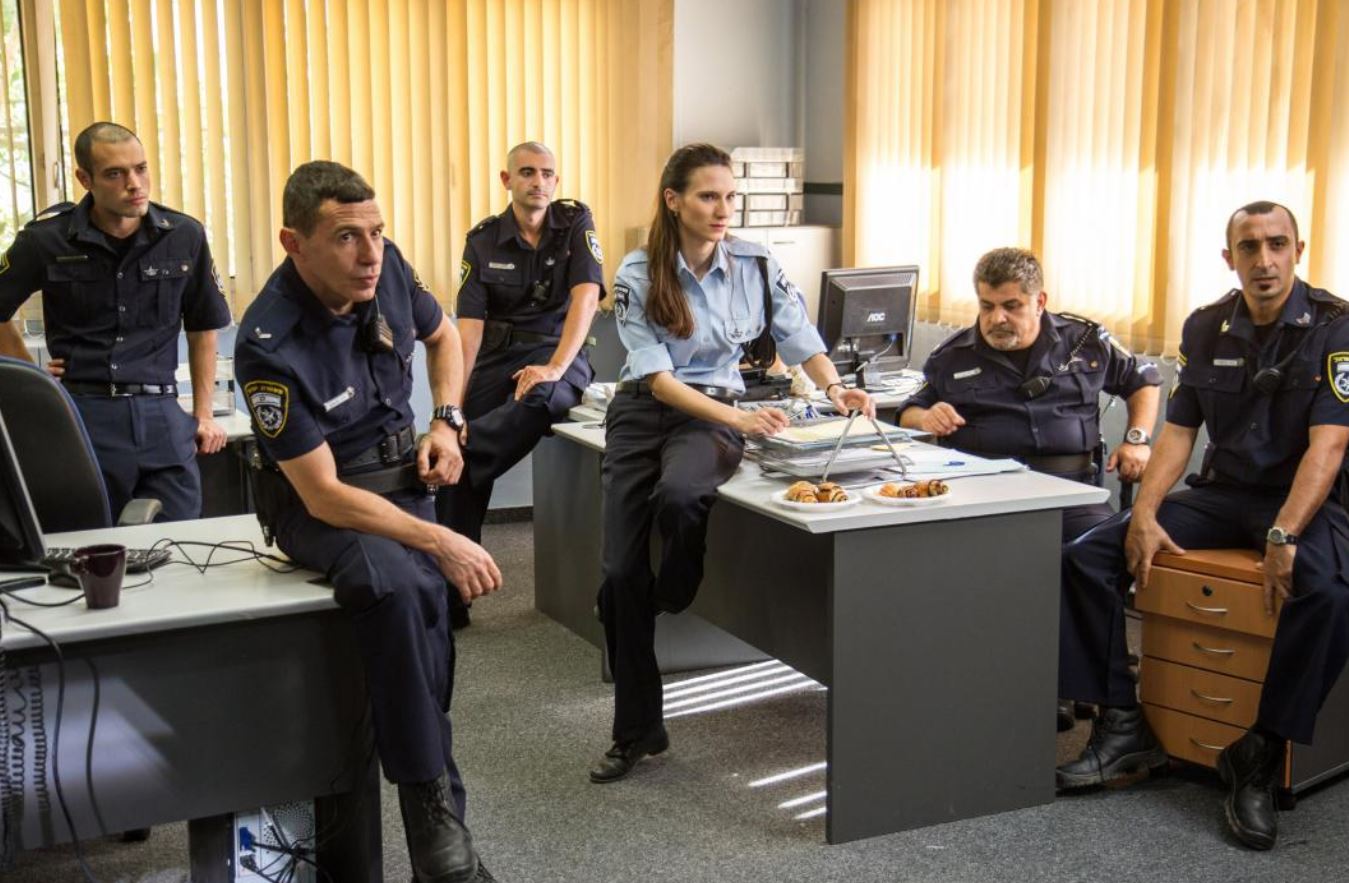 The Good Cop (Hashoter Hatov, original title) is a two-season 30-episode television series created in 2015-2017 (not to be confused with the American television crime series by the same name which is based on the Israeli version). It is both entertaining and revealing about the dilemmas and drama of modern Israel seen largely from the perspective of a secular public concerned about living up to the high ethical demands of public service they expect from the police and other institutions in the Jewish state and managing the many challenges and conflicts that are present in everyday life. Its creators are Erez Aviram, Tomer Aviram, and Yuval Semo (who also stars in the lead role as Police Sgt. Danny Konfino). After watching the full 15 episodes of the first part, I can define it as what I would call a Bright-Light Dark Comedy, combining two genres successfully and embracing both the farcical and noble. The hero, Danny Konfino, is very short (no taller than 5’2″) who starts off a career as a policeman, condemned by his stature, unimpressive looks and physical appearance, lack of education and innate sense of what is “right” amidst a society that still honors these values in theory but finds them increasingly difficult to live up to. He serves at a suburban police station, Petach Tikvah, very much like the three settlements (Nes-Tziona, Rishon Le-Zion and Zichron Ya’akov), I lived in during the 11 years I spent in Israel. All four of them began as agricultural settlements committed to the high Zionist ideals of an ethical, just society and productive labor. All four eventually became part of the much larger metropolitan areas of Tel-Aviv and Haifa.

Danny views his service and commitment to doing a good job at the local police station in which he often stands alone and is further compromised by the need to subdue his basic emotions and ideals without rocking the boat and upsetting all those around him. These include a dysfunctional family, materially possessive parents, a 6 foot 4 inch brother who knows how to get the upper hand in any situation and is oblivious to any sense of fairness, another brother who lives in Miami and has been involved in multiple shady deals, a career motivated police-chief called Robbi (the name can also be sarcastically understood as “Rabbi” to indicate his authority and supposed wisdom). Robbi is only concerned about fitting into the system and never embarrassing his superiors. He has no concern for the well-being of his policemen in the field and continually rubs his palms with hand lotion representing his first course of action is always to smooth things over.

Danny’s life is further complicated by a succession of difficult relationships with women, that includes what for many Middle Eastern men is regarded as the worst insult to his manhood—being left by a girlfriend, Dalit, in favor of a lesbian relationship. This occurs in spite of his honest attempts to form a father relationship with Dalit’s 10-year-old son. Danny is ordered by his chief to enroll in an obligatory anger-management course conducted by an incompetent psychiatrist but never wavers in a strong sense of loyalty to his fellow police officers who all have their own hang-ups, and weaknesses. In spite of so many issues, he is a “gever” (a real he-man) who never withdraws in the face of conflict and confrontation or pretends. His superiors know he cannot be bought or intimidated by bureaucratic red tape. 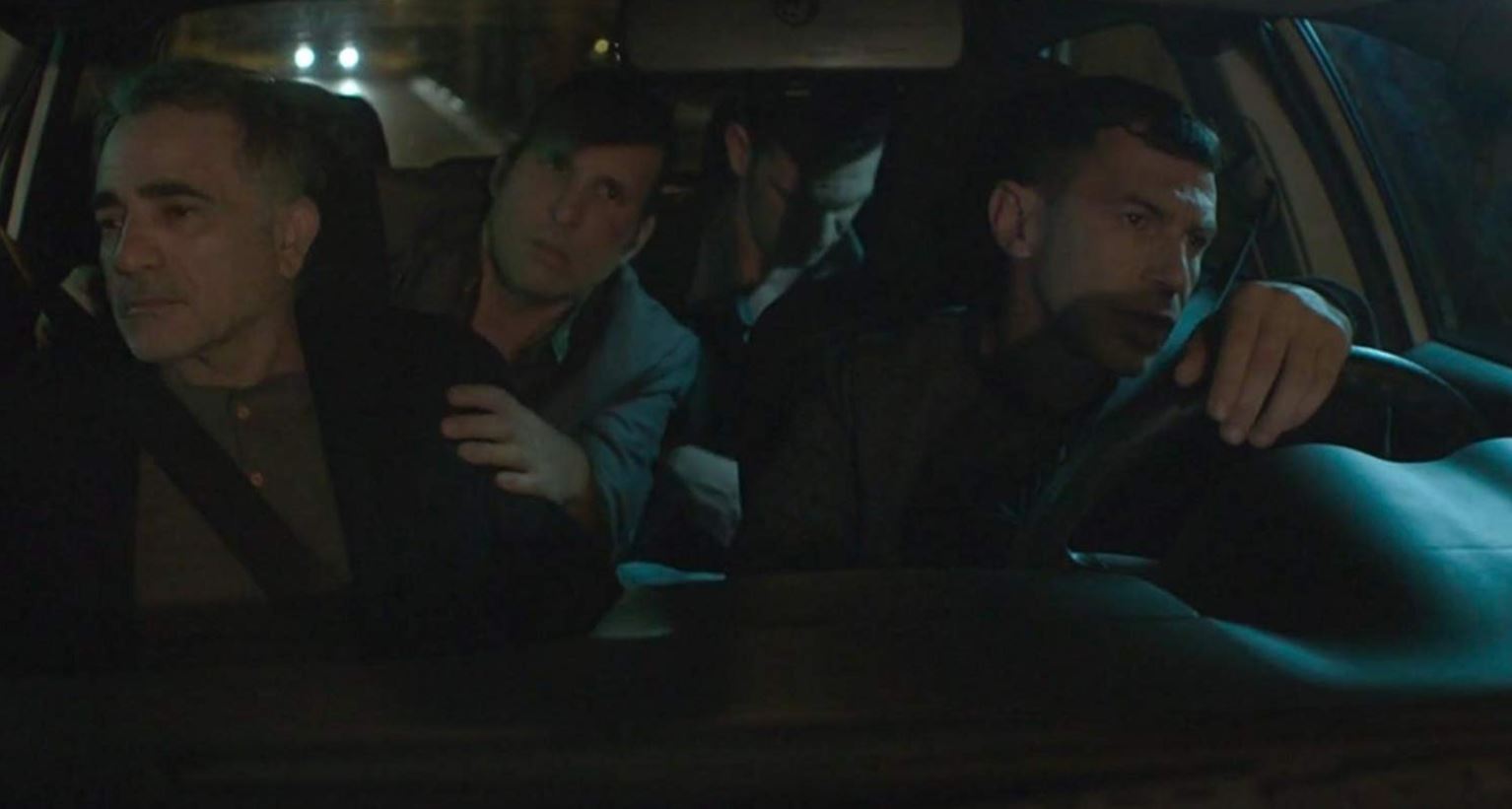 Episode 2 contains a scene I was particularly familiar with due to a serious car crash in Israel and needed several medical examinations to fix the extent of my hip and foot disability which determines the amount of insurance compensation. The public is familiar with infamous cases of dead beats like Danny’ father, Yizhar, who fakes his disability with the connivance of crooked doctors. In an interview before the medical disability committee, Danny is mesmerized by the image of his father, feigning injury in a wheel chair, and the symbol of the State of Israel on the wall. The camera flashes between the two, ending with Danny losing control and blurting out the truth. He faces similar ethical dilemmas in refusing bribes of substantial amounts of money offered by crooked businessmen, including one multi-millionaire who grew up in the same neighborhood as Danny. This character always made the wrong ethical choice from which he prospered, rubbing this fact in Danny’s face to ridicule him.

These injustices plague Danny who cannot equate them with the image of his role as the “good cop”. In many other situations he comes to face in the first 15 episodes that are familiar to most Americans who, like Israelis, are aware of numerous cases of corruption, influence peddling, nepotism, cronyism, vote fixing in politics, trafficking, smuggling, illicit gambling, crooked businesses that rip off their customers, and the more serious security issues of kidnapping and hostage taking, as well as social issues of family, ethnic feuds and sexual exploitation. Danny must confront one or more of these every day. In all of these situations, there is however a comical aspect. One of the funniest which equally satirizes Jews and Arabs is when the Arab member at the Petach Tikvah station (Yes, Israeli Arabs do serve in all the security branches including the police and well as the military and intelligence services), Razi, suffers from a concussion that produces a “partial amnesia.” When he awakes, he is only able to recognize the Jewish society in which he works but not his intimate, familiar Arab one in which he grew up, failing to even recognize family members.

Danny is also wholly working class and cannot abide the many snobs and nouveau riche who pretend to like modern art, and haute cuisine and other cultural fads they really do not understand. He is also suspicious of all get rich quick schemes on the stock market, banks, investment companies and loan sharks. Midway through the first series, he eventually finds a new female soul mate in the persona of the attractive Bukhari (Central Asian origin) girl he was too busy to notice among the other police staff at the station. Further elements of humor are is much of the banter between the main Jewish characters that reflects behavior and tastes in food of different geo-cultural origins between Ashkenazim (Jews of Central and East European origin) and Mizrahim (Jews of Afro-Asian origin). Conflicts between secular and religious Israelis is another theme that runs through several situations. Danny has no patience for much of the holier than thou attitude of the ultra-Orthodox and, in episode 4, is quick witted enough and familiar with scripture, to spot a long sought-after criminal, masquerading as a Breslau Hasid (orthodox sect).

There are many story lines in the film, some of which will strike an American audience as vulgar such as ridiculing parents, gays, Arabs or the latest immigrants from Russia but this is theater of the absurd par excellence in which everyone is ridiculed, most of all those who pretend to be someone and something they ae not. Towards, the conclusion of the last episode, the comedy turns ultra-dark and many viewers probably expect a nihilistic ending, damning everyone and Israeli society as well, but Danny comes through, turning the tables and confounding expectations. In so doing, he redeems the State of Israel and its Zionist ideals from all their real and imagined faults and also ends up as a macho hero reunited with the love and admiration of both his former girlfriends. 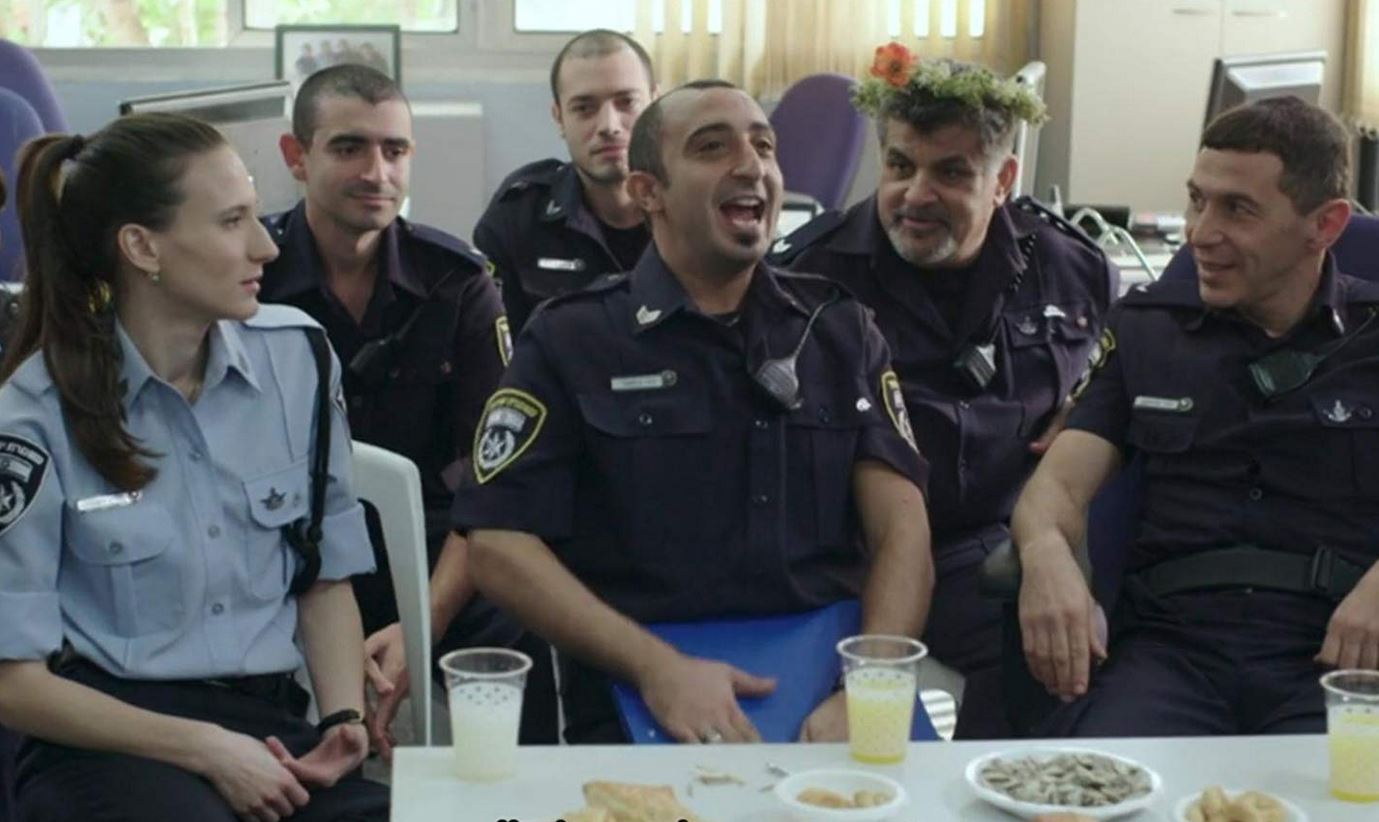 Over the past two generations, there has been a steady decline among American Jews in the cultural and emotional identification they feel with Modern Hebrew literature, song and dance, elements that once drew many Jews in the Diaspora close to the Zionist project before the full emergence of a modern national Israeli culture. Nothing better illustrates why Jewish identity no longer encompasses much of the sense of solidarity or the intense pride found among the parents and grandparents of American Jewish university students. “The Good Cop” is much more than comedy. It demonstrates the irrepressible determination of an indefatigable modern Israel to thrive, succeed and take time out to also laugh.

Read more in New English Review:
• The Battling, Baffling Watergate Editor
• Twentieth Century Architecture as a Cult
• Some Thoughts on the Empty Heart of Modernism

The translations are for the most part excellent, highly colloquial and reveal the growing tendency of Modern Hebrew to develop its own slang. Many American Jews, in spite of numerous trips to Israel, are wholly unaware of much of “what makes Israeli society tick,” that it has a vocabulary more than ten times larger than the classical languages of the synagogue service, the Bible, Mishna and Enlightenment or that all laws, debates in the Knesset, the legal cases in court, and applications for patents, are in Hebrew. Their view of Israeli affairs is often biased because it is based on highly selective and fragmentary extracts of published material translated from Hebrew by the media. What viewers can learn from the series apart from humor, is how many Israelis have to adapt a tough outer shell like of “The Good Cop” to manage their cruel environment and yet retain a sense of integrity.

As a fluent Hebrew speaker and translator, I know how much good translation is an art. It must focus on much more than vocabulary and grammar—it needs to prioritize cultural variance which is often reflected in the way people speak. Films rely heavily on the emotional investment of the audience in the characters, their voices, use of language and plot lines. This cannot be conveyed simply by subtitles and least of all by dubbing that often lacks nuance and tone and became clear very soon after the innovation of sound films in 1929. Translators must be thoroughly familiar with expressions, jokes, and sarcastic remarks that do not have an exact equivalent in the target language. Idioms are particularly difficult, and the translator must understand their context to ensure correct meanings. The viewer/listener is struggling to assimilate the action on the screen while reading the subtitles at the same time. I am familiar with the problem first hand, having devised the Hebrew subtitles (Filmtechnik, Tel-Aviv) to the Danish film “Twist and Shout” (original title Tro, Håb og Kaerlighed) that played in Israeli movie theaters in 1983.

Much of the reality of Israeli society as well as the modern Hebrew language are foreign to American Jewish audiences who find little incentive to study it in spite of all the verbiage about being “one people.” Viewing this series in the original Hebrew added an immense amount of both joy and understanding to my appreciation of the comedy and drove home the old adage, attributed to Bialik, that “translations are like a kiss through a veil”. Watching “The Good Cop” is a healthy prescription to keep up with the changing dynamics of modern Israeli society*. And I eagerly away Part Two with its additional 15 episodes.

*See New English Review Modern Hebrew—The Past and Future of a Revitalized Language (June 2014) and Israel at 68—Growth, Prosperity and Defiance (June 2016)