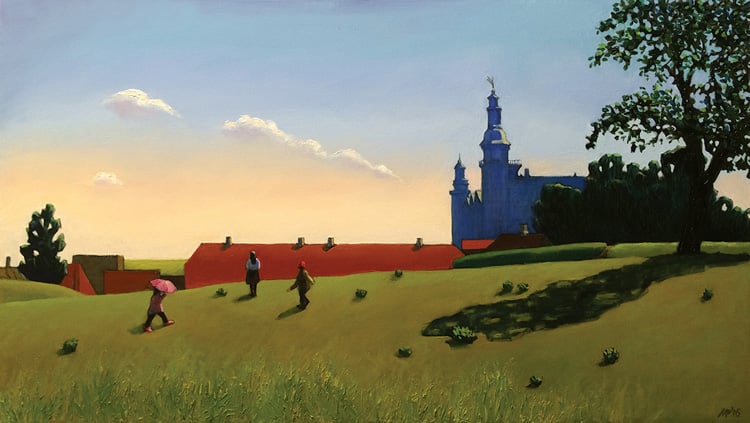 Two major views of Hamlet especially bother me. Although they are so prevailing, they do not, to me, ring true. One, frequently and publicly stated enough to have become standard, is that vigorous Fortinbras is the reliable one who arrives at the close to restore and mend the ailing Danish kingdom. The other is a view of Prince Hamlet who, for all his brilliance, is an action-impaired neurotic: his early stages of self-accusation are often marshalled as “proof” of inability or fault.  Efforts to pin down, over-define, to conclude by applying diagnostic tools, tend to confer an illusion of authority over the hero’s evolving stature in an inconclusive unruly world.

My own view is radically different . . .

Prince Hamlet he remains, for he is King of Denmark for only a moment’s few lines. We have little time at the last to part with him. Hamlet, himself, has little time to say farewell to his true friend Horatio and to ask that his own cause be reported, his story told. He bequeaths the kingdom—Is it desolate? Is it purified?—to Fortinbras as he has his own glimpse of Felicity.

Fortinbras cannot rescue Denmark. Insofar as that could be done, Hamlet comes close to doing so when he kills the treacherous Claudius. Fortinbras is the recipient of an almost salvaged kingdom. He will stride in at the end and, unaware of Hamlet’s gift with his dying voice, claim Denmark as his own.

We’ve seen that Fortinbras has many of the qualities suitable and convenient for a leader. He can engage in drastic simplification. He can switch cause and course. He can negotiate. An army is an army; war is war. If not Denmark, then a strip of Poland; he can compromise. Hamlet, with his grave and outsize cause, needs a different order of time. He doesn’t wish to accord it to himself. He tends, at his own expense, to over-estimate Fortinbras, praises even Fortinbras’s “capacity to find quarrel in a straw.”

Fortinbras is the only one in the play who receives a clean legacy: no entailments, no unfinished business to enact. Hamlet does better by his “heir” than did Fortinbras’s father, certainly than did Polonius, and, in bequeathing a true measure of freedom to his heir, better than the ghostly King Hamlet.

Yet, though he provides for succession to his own radically abbreviated reign and concerns himself with posterity through Horatio’s report, his literary reputation—the very one I am objecting to—has remained one of near stasis and hesitation.

Well before the arranged duel, the audience knows the extent of Claudius’s murder plot: poisoned goblets, the poisoned edge of the collaborating Laertes’s unbated sword. It’s elaborately clear that Hamlet doesn’t stand a chance. Yet, though we know what awaits Hamlet, we continue to root for him even as we begin to mourn. Hamlet, innocent of Laertes’s complicity with Claudius, declares before all the court that he considers Laertes as a brother and the duel a brother’s wager. Toward the close—as at the beginning—brother kills brother through Claudius’s means.

What, since the harrowing initial tale told by the ghost of King Hamlet to his son, has changed? Is it the way we have come to see the fact of death? When Hamlet, dying of poison, kills Claudius, revenge, a just measure of self-defense, and accidental murder (of Gertrude) all converge at a near-breathless pace. Death—from the gravediggers’ labor to the burial of Ophelia to the offstage execution of Rosencrantz and Guildenstern—is the unremitting subject of thought and action in the fifth act.  The final act, though, is less grave and weighty than the others—the lightest one in that there is no self-blame, there are no soliloquies at all, and the tempo is swift and full of outward activity.

Our perspective on death seems to have changed as Hamlet, himself, has changed. No longer the melancholy figure in inky cloak, Hamlet has brought himself—after a sea voyage, prescient as it was and threatening—to a different state of being. Through intuition, improvisatory gift, and use of his royal seal, he intercepts the commission for his own death. He may have had suicidal thoughts in the past, but he has absolutely refused to co-operate in having his life ended by command of the usurping Claudius. He saves and renews his life.

So these are the actions of an immobilized and hesitating neurotic?! Through his own sheer bravery Hamlet arrives at a confrontation with destiny itself, a readiness for whatever comes. We sense that he has reached an unmatched level of consciousness. In the land he has called Felicity will he be alone?

We start to mourn him even as we learn that no depth of awareness can save him, so thoroughly has Claudius doomed him. We carry our own impending loss of Hamlet with a tender if helpless protectiveness. There is an undersong of Shakespeare’s own hymn to consciousness, to what Emily Dickinson calls “internal difference where the meanings are.” And what seems also to be given autonomous dramatic presence is that silent, eloquent theatrical instrument, time.  There may be no ultimate deed, doing might be factual as death that binds and frees continually.

Hamlet’s own mighty and reconciling consciousness has included death as a fact. Mysteriously, it seems to lighten our own burden of imminent loss as we honor the hero of Trying-to-Know, the prince of Finding-His-Way.

The bus from Copenhagen to its outskirts quickly arrives at Elsinore. “That is the Hamlet Castle,” the driver announces with a factual pride. One might see the ramparts where Hamlet walked and thought. Does it matter that Shakespeare never saw them? It is the Hamlet Castle, and in a way that defies explanation, it is ours also.

PrevThe Strains of a Nation
Rock Around the Clock: Dance Mania of the LeftNext