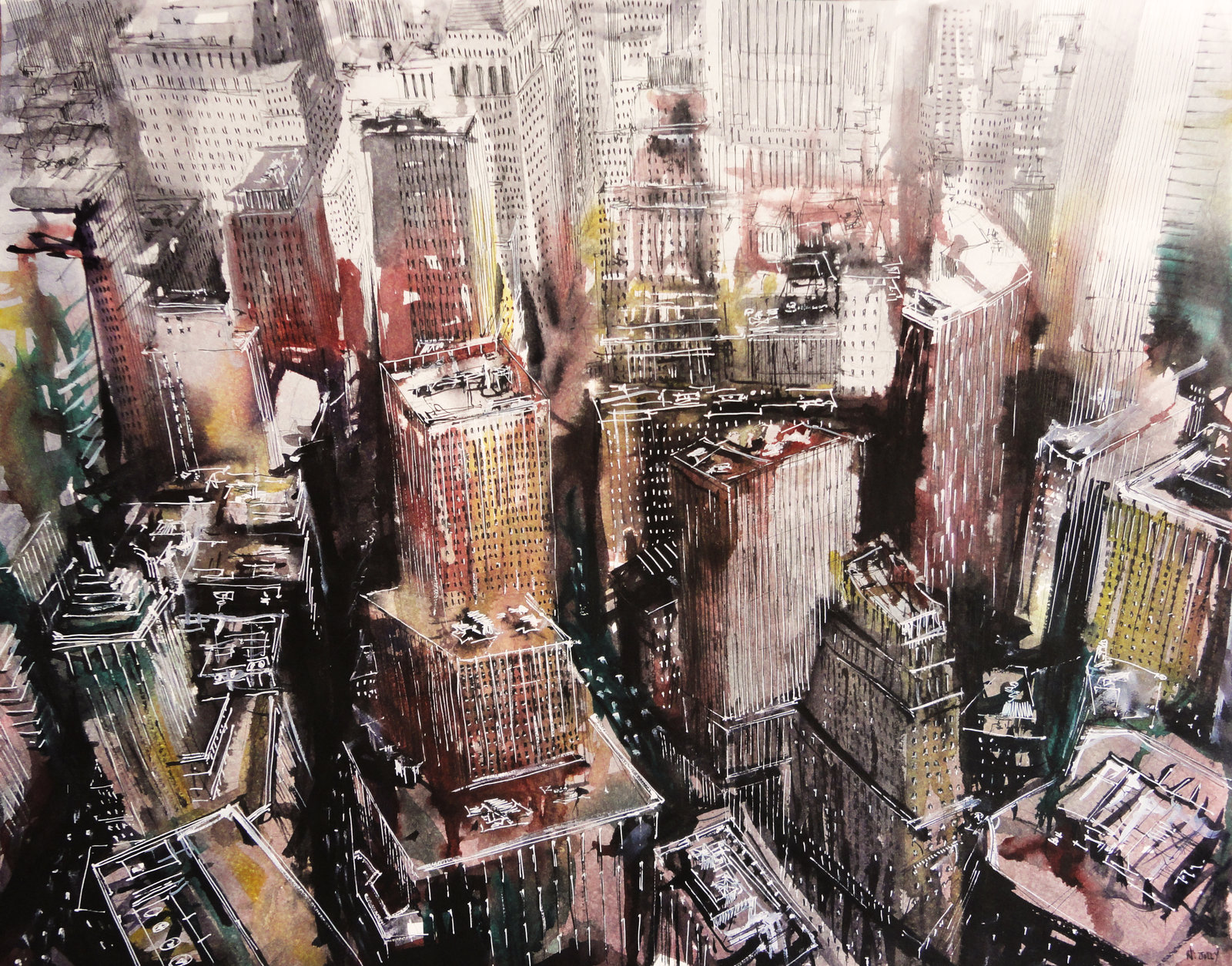 Ayn Rand’s The Fountainhead is, on the surface, a novel contrasting the lives of two architects from the point of their graduation to maturity. One of them, Peter Keating, is a mediocrity but is nevertheless a master of schmoozing and networking; he has no integrity and for all intents and purposes is a spiritual prostitute. The other one, Howard Roark, is an uncompromising architectural genius, but cold, rigid, and socially inept. Their lives often intertwine, particularly anytime Keating is over his head, stuck with a project, and goes seeking Roark for help (Rand modelled Roark’s character on the eccentric architect, Frank L. Wright. She visited him regularly until Wright kicked her out for her continuing to smoke in his presence after being told not to, grabbing her pack of cigarettes and throwing it in the fireplace.)

Parallel to these characters are three secondary, but likewise intertwined characters, and a host of lesser figures. Of the three, there is Gail Wynand, the head of a vast newspaper empire, a power-hungry opportunist who panders to the lowest common denominator in society, a self-proclaimed Kingmaker in New York City who enjoys exercising power over others; his one redeeming feature is a passionate appreciation for art in all of its manifestations. The second is Ellsworth Toohey, a malevolent genius, working for Wynand, spreading a vast web of fanatical followers while promoting mediocrity in literature, theater, politics, music, and architecture; underestimated in his malevolence and power, his ultimate goal is political power. The third, and relevant to this essay, is Dominique Francon. She is the love interest for Roark, Keating, and Wynand. She is also a neurotic and a repugnant character, though Rand would almost certainly have strongly disagreed. She holds the entire human race in contempt for constantly glorifying and rewarding mediocrities (understandable). She sees society totally saturated with vulgarity, stupidity, crassness and mediocrity. She views Toohey as being exactly what humanity deserves. At this point, one can certainly sympathize with her in our age that glorifies the Kardashians, the Miley Cyruses, the Chelsea Handlers, the Lindsay Lohans, and with television being the masses’ drug, with the glorification of promiscuity and criminality and shows like The Jerry Springer Show, Entertainment Tonight and others.

However, where the Dominique character becomes particularly repugnant is when she meets Roark and sees his creations which take her breath away in admiration. But, instead of helping him and promoting his work, she does the complete opposite, steering clients away from him and toward a second-rate architect (Keating). Her rationale for doing so is that human beings do not deserve Roark and cannot appreciate his creations since most cannot tell the difference in quality between a Roark and a Keating. As for Roark himself, he inexplicably does not resent her actions, but finds it at times amusing, at times a challenge. On top of this, throughout her activities against him she regularly sleeps with him.

At one point in the novel, Roark is commissioned to build a temple to the spirit of mankind, that is, the heroic in mankind, an architectural Eroica, as it were. The temple is built and subsequently mutilated by others and the original architect is lambasted for his supposed atheism, whereupon Dominique decides to commit spiritual suicide by marrying, of all persons, Keating. When this fails to do the job, she ups the ante by dumping Keating and marrying someone even more contemptible to her, Wynand. Throughout, her character’s main philosophy seems to be that of renunciation.

The Fountainhead has often been said to be in a sense the prequel to Rand’s magnum opus, Atlas Shrugged, a gargantuan work so characteristic of other Russian novels as to size and constellation of characters (Rand herself was a Russian émigré). In this latter work, the protagonist is Dagny Taggart, the head (and inheritor) of a vast railway empire who is desperately trying to keep it together at a time when society seems to be heading for a colossal smashup at breakneck speed. What Dominique Francon viewed with disdain has now become leprous and metastasized and has completely saturated society at every conceivable level and in every single field of endeavor, no matter how elevated, or how modest: politics, business, music, art, farming, mechanical ability, cooking, etc. Mediocrities, particularly vicious mediocrities, abound and proliferate and their parasitism and ineptitude are alternatively praised, excused, or blamed on others. As for the rest of the countries in the world, they have descended into a sort of Dark Ages, with the United States soon to follow in their footsteps. As Taggart repeatedly attempts in a Sisyphusian manner to fix problems, avert catastrophes, and outmaneuver the parasites that are constantly attempting to hamstring her and her competent colleagues, she ultimately becomes aware of a conspiracy. This conspiracy is manifested by systematically persuading the creative, competent, intelligent members at all levels of society to go secretly on strike, to drop out of society. They renounce the culture as it now stands. As a result of their (in)actions, society steadily deteriorates at a faster rate. Far from joining them, Taggart only works that much harder in keeping it all together until there comes a point at the end of the novel where she finally gives up and joins the conspiracy headed by the mysterious engineer, John Galt.

Simply put, Dominque Francon is a defeatist in combatting evil and mediocrity while Howard Roark is a fighter, Dagny Taggart is a fighter though John Galt is a defeatist. Rand sees both sides of the equation as admirable in her characters. This is the paradox. The paradox is somewhat attenuated by the rationale for the defeatism of Francon and Galt. And what is further curious is that these contradictions were never noticed or voiced by Rand or her followers.

There is another duplication in Rand’s major works, that of the female protagonist sleeping with the two men that symbolize opposing political and philosophical viewpoints: Taggart sleeps with John Galt (the defeatist) and Hank Rearden (the fighter); Francon sleeps with Roark (the genius) on the one hand and on the other marries Keating (the mediocrity) and Wynand (the opportunist); in her first novel, We The Living, Kira Argounova sleeps with Leo Kovalensky (the bourgeois) and Andrei Taganov (a Bolshevik) who are polar opposites in politics.

Ayn Rand was personally a very combative individual—to put it charitably—who often praised the heroic aspect of human beings, the heroic here meaning not only physical bravery, but talent, intelligence, and integrity (“the virtue of selfishness”). She was also well known for being very rigid and unforgiving to others who did not share her worldview; in this she fits the pattern of those individuals who were very creative but very obnoxious in their private lives (e.g., Richard Wagner, Jackson Pollock, Wolfgang Mozart). All the more curious, then, that some of the main characters (“the good guys”) would turn out to be quitters, regardless of the reason. It is a paradox. This paradox was also reflected in her personal life in that her husband, Frank O’Connor, did not seem to have a steady occupation, being a former character actor, preferring instead to devote his time to painting. She would explain to others that he had dropped out of the world in disgust, like some of her characters (life imitating art). Their friends and acquaintances referred to his occupation behind their backs as “Ayn Rand’s wife.” In reality, Rand had firmly planted horns on his head, spiritually emasculating him through her open affair with one of her fawning fans (yet was oblivious to the psychological harm she was inflicting). By doing so, she was doing exactly what her fictional characters were doing, sleeping with a defeatist (her husband) and a fighter (Nathaniel Branden, who was considered her second in command).

Yet, regardless of the personal detail, I believe that this literary paradox is one that will remain forever unresolved. And the fact remains that while the Francon character is contemptible, the Taggart character is admirable, yet Rand expected the reader to have an equal regard for both characters. That expectation was irrational. And that, of course, is a conclusion that she would have fulminated against.

Heller, Anne. 2009 Ayn Rand and the World She Made. New York: Random House.

______________________________
Armando Simón is a trilingual native of Cuba, a retired forensic psychologist, and author of A Cuban from Kansas, The Only Red Star I Liked Was a Starfish, Orlando Stories, Wichita Women, and The Cult of Suicide and Other Sci-Fi Stories. They can be obtained at Amazon, Lulu, and Barnes & Noble.