The Lake of Saint Beatus 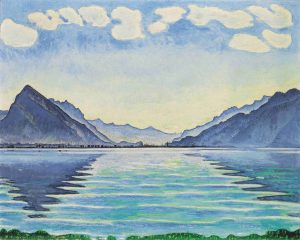 Lake Thun,
What did you see
Above your waters?
‘A hermit blazing
With Divine Fire,
Being lifted up
Into the sky.’

Lake Thun,
What now do you see
With your liquid eyes?
‘A giant fiend
Obstructing the mountains—
His legs like iron pillars,
Whose black wings stretch
Across the horizon,
Whose body exhales
A misty vapor
That poisons the soul,
Darkens the heart,
And blinds the nous.’

Lake Thun,
Who can escape
The loathsome beast?
‘He who honors
The Woman clothed with the sun,
With the moon beneath her feet,
And a crown of twelve stars
Upon her head.’