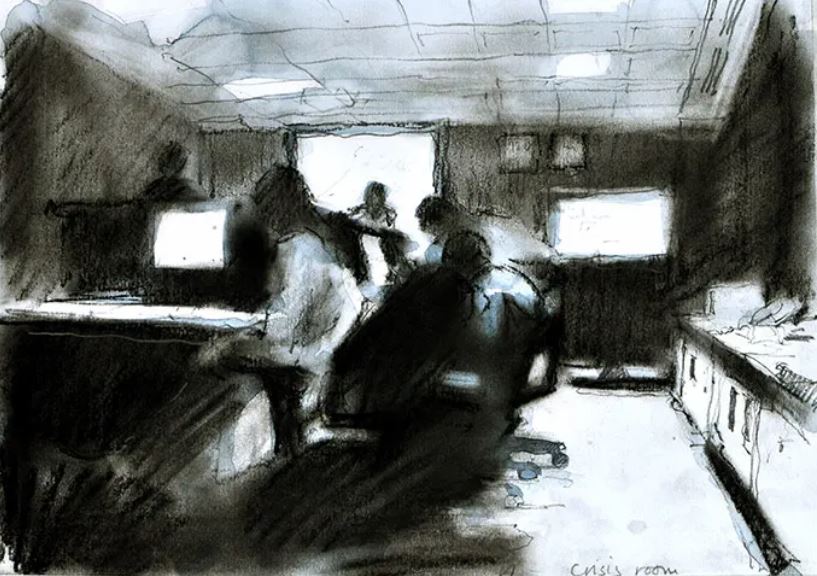 I had arranged the meeting. The venue was at the top of a narrow flight of stairs in an unmarked room. There were five of us—all men.

Ivan spoke first. He was a tall, haggard looking man in his mid-forties. He looked older. His head was shaved bald, as was the fashion at the time.

He looked down. “I want to confess to you the worst thing I have done in my entire life.”

Feet shuffled and someone coughed. I looked down at the bare floorboards and then up at the water-stained ceiling.

“I lived in a rented room in a boarding house out West. In an adjacent room was an absconder. He had sworn all of us to secrecy. The authorities at that time were combing the Western States for dissidents. Hate crime was on the upswing and was punished severely. I understood that he had been given 7-10 in a Wyoming labor camp for some spoken indiscretion. How he’d managed to escape, I don’t know. “

I had things to hide. I decided not to interrupt.

Ivan continued, “We swore we would not turn him in, despite the promised reward of being removed from the lists.”

Sydney, a younger man with ill-fitting spectacles, looked at him and pulled his general-issue coat around him tighter, suddenly conscious of the unheated room.

“I admit that I waited several days before informing the authorities. Waiting that long was, as you know, against the rules. But they say everyone has his price. Mine was an extra month’s rations of canned sardines and removal from the list. Somehow, my failure to inform immediately was overlooked. Yes, I feel shame. Zoroaster only knows . . . ” He trailed off.

I should explain that sardines were usually only available at state-controlled warehouses. Men on the lists were fearful of approaching such places. Controllers were almost all unpartnered, middle-aged women who had passed The Test (series B). In addition a carefully selected cadre of transsexuals and a growing number of animans were admitted to lower admin positions. These were allowed to serve under the watchful eye of hidden cameras and global face-identification software.

Zak, a coarse-looking individual who had neglected to receive melanin-booster implants, said nothing. I was aware that he avoided Ivan’s face. He explored his tunic pockets, perhaps hoping to encounter a last remaining twist of illicit nicotine.

Now it was Sydney’s turn. “The worst thing? I think it must have been when I tried to comfort a weeping senior on the commuting coach. I was young and he was old, so the punishment wasn’t severe. I found out later that he was being escorted, melanin-rich or not, to The Elderbridge. Of course, that was before the Fifty-Ninth Amendment passed the Senate. Anyway, as far as I know, my name was not added. Alright, I do regret this past action. But I don’t think it was as bad as Ivan’s betrayal of the hunted one.”

No one challenged this clear speech error. Negatively comparing someone else’s wrongdoing with one’s own had long been restricted as part of the Proscribed Speech Amendment. Secretly, I agreed with Sydney’s remark, since it was within the normalized gender boundaries. I let it go; I had my own geese to fry.

“I think it is your turn next, Zak,” I prompted. He was still fishing in his tunic and looking around nervously.

“I, I, I umm,” he stammered. “I admit, I once borrowed my cousin’s ration device, and, and uh, when he was suddenly . . . uhh . . . removed, I didn’t think it necessary to report my extra rations to the woman in charge of warehousing for my district.”

“Were you caught?” I asked. The water stain on the ceiling appeared to spread.

“Uhm, no. And that was twenty years ago. I was still not fully formed. I was still learning the rules, in my local State Gakko. In fact, I was still memorizing the list of approved pronouns. But, well . . . nothing happened. I now think my misstep was wrongly processed, probably by an apprentice animan, who hadn’t learnt all the regulations zooself.”

“And I have another,” Zak continued speedily, linking his two worst actions together. “I also didn’t fully understand prepersoning. That was being debated in the Senate, but hadn’t yet passed into controlled supervision. I was confused. I really thought that allowing post-birth abortions up to age twelve was not completely proper.” Quickly, he added, “I know now—well everyone knows now—that twelve is appropriate.”

There were nods of approval, feigned or not, I wasn’t sure.

“I said publicly that I opposed such a change. I knew that abortions up to five years was completely ethical, as I suppose everyone did, but twelve seemed rather unfair, almost haram, as a cut off point for prepersoning.”

I thought of the pretime story from which the authorities excavated this life-enhancement scheme.

All of us paused for a few moments. I think we were reflecting on the gravity of the confessions.

“Hector?” I urged. Hector, was probably the oldest in the room. He was scarred with the telltale signs of poorly executed tattoo-remorse procedures. He had the uneasy look of a hunted criminal.

“It was Pretty Flamingo,” he almost blurted out. The others tried to hide their astonishment.

“It was at the beginning of the ‘Civic Grief’ era. I admit I did, well uhhm . . . like her.” He swallowed. “During screen observations one day I definitely touched her on the arm. Well above the elbow, of course. She showed a momentary spasm of confusion, but uhhm, quickly reasserted self-control. I was embarrassed, and prayed to Zoro that she would not report me. I don’t think she ever did. But how was I to know that within a matter of years Pretty would be Coordinator for District 17? I mean . . . ” He struggled to continue. The other three choked back their amazement at such a confession.

“Hush, hush,” I said, consoling him with a gentle hand motion.

Only I was left.

I said, “At the time I was working in a spare-organ-parts repository. I refused to serve an animan. Zoo’d had the operations legitimately, but I had my own convictions about who could serve whom.” I paused to let the confession sink home.

“My immediate superior at the store was, if I remember correctly, being fast tracked. It was Pepper Seagull . . . you may remember her. She had me removed. I believe she is now a District Coordinator somewhere in the Texas Panhandle on the border with New Aztlan. I know she passed The Test (Series B) because her achievements were posted in The Guardian.”

And that was it. I had confessed openly, but with confession came not relief. I had to continue, carefully selecting the words so as not to appear too churlish. “I have another confession to make.”

All eyes centered on me. A groan came from one of the four.

Zak had by now managed to piece together a nicotine twist. He inserted it into a corner of his mouth. I noticed his hands were shaking.

I continued, “I have to confess that . . . that it was me who arranged this meeting. I think you know that I chose the venue. Yes, a place where face-identification software has been blocked. But, I must tell you that Browser Voice Command was not deactivated. Your confessions have been recorded and stored. You four will already have been listed. And given the seriousness of your past actions you can expect chastisement.”

There was silence. I heard a fly buzz when I . . . lied. Was that it? I struggled to remember the ending of a line from a pretime poem.

The others sat rigidly. Zak stammered out, “But, but . . . what, what about your confession? And didn’t you claim to have some white-person ancestry?”

“That was fake.” I opened my tunic above the waist to reveal the brightly tattooed medallion of a State Securitate Operative. Outside, the sirens could already be heard.