The Mob of the Invisible 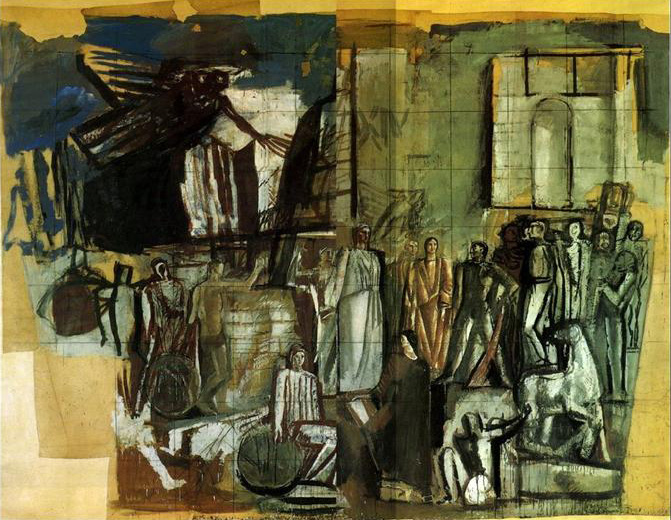 Italy Between the Arts and Sciences, Mario Sironi, 1935

I get a little thrown sometimes when I realize that I don’t know what things are like anywhere else. I don’t know the vibe in New York or the gestalt in Topeka. I don’t know what Floridians see when they walk down the street. I just don’t know much about how people measure their worlds outside of my own, and have to guard against the tendency to assume that what I know about my home applies everywhere.

I do know what it’s like here. And it’s strange. Seattle. It’s like touching something and not knowing right away whether it’s absolutely searingly hot, or skin-shatteringly cold, because there’s hints of both in the pain. We’re awash in activism. Utterly drowning in it. There isn’t a shop window that isn’t plastered with flyers for this march or that proclamation or that protest. Every author reading at every “local” bookstore—nota bene: everything is local, people. Absolutely everything. it only depends on where you’re standing—every reading is this cultural expression or that identity group’s response to something, or a statement of “this is me climbing proudly out of this miserable social/cultural prison.” In every instance it is billed, at least implicitly, in its subtext, as an exception. A rare opportunity. A victory over something. But you can’t have victory without competition, and you can’t have competition without an opponent, and so without realizing it, the movement itself ossifies the necessity of the opponent.

Read more in New English Review:
• The Spike of Global Anti-Semitism
• The Continuing Corruption in Equatorial Guinea
• The Inverted Age

If you’re still listening to the subtext, you know that here it says that none who suffer do so as a result of their own failings. It is that whatever the nature of their suffering may have been—”invisibility” is a popular one, as well as the closely-related “marginalization” and of course any word with “phobia” trailing from its backside like some undigested serpent that can never quite be pinched free—whatever the suffering, these are people who not only are/were down, but were put there, intentionally and perniciously, and are now rising up in spite of “the dominant culture’s” efforts to keep them down. But this raises a question or two for me:

1. Who is the dominant culture?

As far as I can tell, they are. The sign makers, the book writers, the painters and poets. They’re everywhere. But if their claim is that they are resisting the dominant culture, who is it that’s putting them down? In light of their inescapable pervasiveness and influence, are they even down at all? If so, who is trying to keep them there? Not the athletes and CEOs—they’re all on board and applauding. They’re hosting fundraisers and lending their celebrity to “awareness.” (Show me, by the way, the unaware. There must be an odd colony of them somewhere that eats garden slugs and are too cut off from civilization to have heard of sexism or Old White Males or Macklemore). Corporations have more people in subcommittees working on fair hiring and balancing corporate skin tones than they have working on their actual bottom lines. Are the oppressors the shopkeepers and their customers, who block out the sun with their storefront virtue signals, and curse the planet-eating Republicans over cupcakes as they wipe pureed kale from their baby’s Che Guevara onesie? Can’t be the teachers and the principals (sorry “Heads of School,” as we can’t say “principal” anymore, and I honestly don’t know why), because they’re as helpful as can be. They organize days for students to leave school to protest climate change and corporations (I always thought the protest was supposed to reflect the issue being protested; when I skipped classes, it was to protest school), they encourage multicultural literature and literacy, and are leading the way on efforts for diversity and inclusion. And of course the media and the universities, as well as the music and movie industry, they’re so obviously on the right side of this thing that I don’t need to say any more about them.

In short, every single representation of power and influence of any kind, is dominated by the spirit of charity, inclusion, and diversity. They are populated, organized, and run by people of, to quote Roger Waters, “every race, creed, color, tint, or hue.” So where are these oppressors? If the so-called “invisible” are not the dominant culture, then why are they the only ones I can see?

2. Given all this—given the undeniable momentum and power of movements towards fairness and righteousness and equality, given the ubiquity of this movement in every single aspect and institution of this city, how is it possible that it still feels like such an awful, intolerant, racist, sexist, Islamophobic, homophobic, anti-indigenous (sorry if I missed anyone) hellhole of a city?

The answer to that is actually pretty simple. The misery, the injustice, doesn’t exist in spite of all the social justice activism, it exists because of it. And truthfully, as my own subtext from the preceding paragraphs indicates, it doesn’t actually exist at all. The world, this city, as I walk around in it, is simply not in its actions a racist, sexist, homophobic, Islamophobic place. But, my God!, it feels like it, and the activists (or the media, but I repeat myself) won’t have it any other way. What does exist, in a fetid curtain as thick as the sad salmon hauled from the poison Duwamish, is the idea of injustice. The haunting specter of it. And they have all—high and low, black and white, gay and straight, on and on—risen up in their holy alliance against it, not realizing how adept they have been, all the while, at creating their own need for it. Students are rewarded for writing about it. They are given extra credit for attending poetry readings about it. Their social capital portfolios are almost wholly dependent upon the growth of it. Resist and you’re in. Don’t and you’re dead. It’s a sinister little perpetual motion machine, eating from its own toilet to survive, and knowing on some instinctive, subconscious (dare I say invisible?) level, that achieving its stated purpose would only eliminate its only fuel source.

How oppressed they would feel if someone took their oppressors away?

So no, maybe I don’t know what the rest of the world, or the country, or even the state of Washington looks like. But I do know Seattle. I’m in it on several levels every day. It’s a much nicer, much friendlier, much fairer place individually than the collective seems to want me or anyone else to notice. But I do notice. I certainly hope more people begin to as well. Because all this rallying towards disharmony creates the sensory confusion I mentioned in the beginning. Too hot or too cold? It’s impossible to know, because it encourages an ever-deepening degree of personal guardedness that prevents anyone from staying close enough to each other to find out.

Andy Havens writes poetry, fiction, and essays in Seattle, Washington. His poetry has been published at Seattle University, and his short fiction has been a finalist in a Glimmer Train competition. Andy is a dedicated husband, full-time father, and US Army veteran who is studying the Arabic language.