The Ornamental Role of the Poet in a Democratic Society 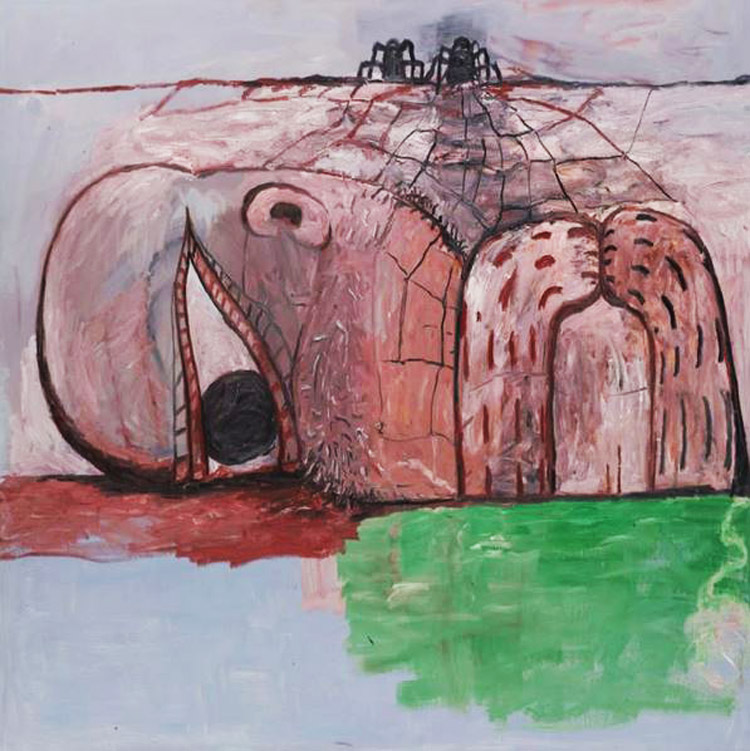 I am ashamed to think how easily we capitulate to badges and names, to large societies and dead institutions. Every decent and well-spoken individual affects and sways me more than is right. I ought to go upright and vital, and speak the rude truth in all ways.—Ralph Waldo Emerson

Often I have used that Emerson quote. How not to? It incapsulates establishment reality—the very reality of the poetry establishment! The role of the poet in a democratic society sadly echos that of the poet in a totalitarian society: anything but Emersonian rude-truth. Maxim Gorky was an example of the latter, while all of our “known” poets—laureates, inaugural, prize-winning, etc.—tend to illustrate the former. In essence, the poet’s modus operandi today tends to be thou shalt not bite the hands that feed or might feed. A rare poet, who actually dares counter that approach and, for example, openly criticizes the poetry establishment—the icons, the academics, the magazines, the organizations, the events, the prizes, the money, money, money—, will likely be ostracized. Personal experience has enabled me to make that conclusion (see here and here, for example, for about 50 such experiences). As a poet, writer, and cartoonist, speaking/writing rude truth, for me, has far more importance than publications, invitations, grants, renown, etc. 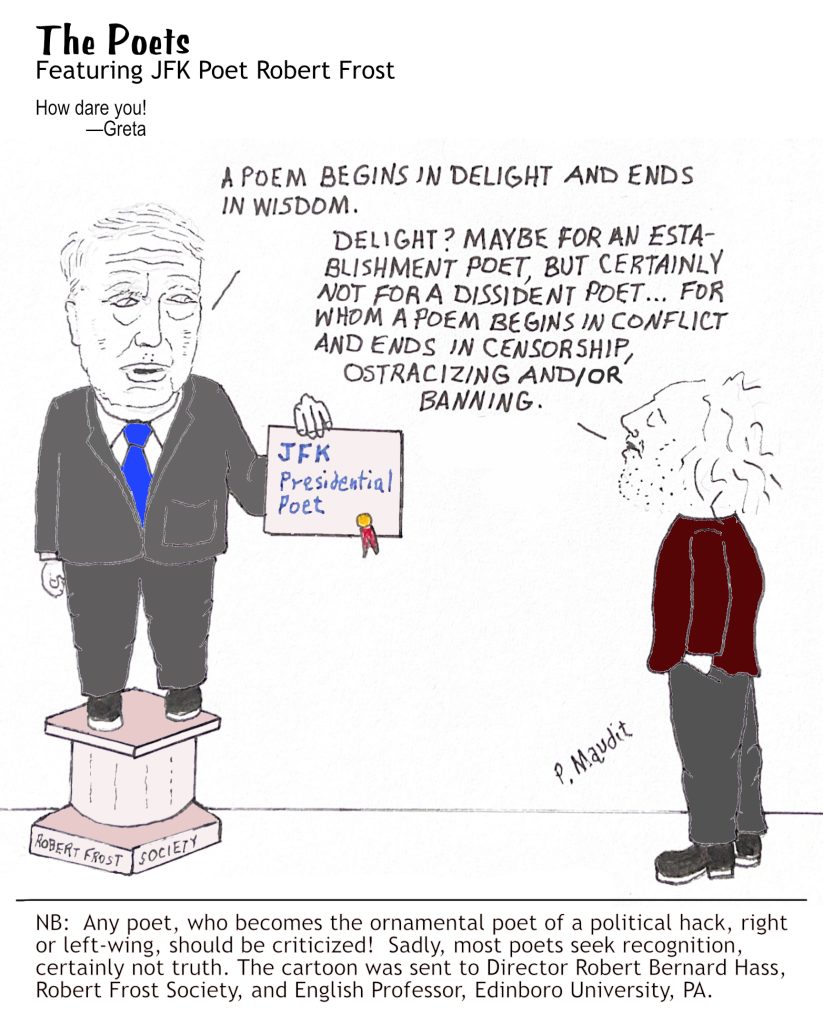 In that light, a quote from Robert Frost inspired me to sketch a critical cartoon on Frost, which I then sent to Robert Bernard Hass, Edinboro University English professor … and director of the Robert Frost Society, who surprisingly responded:

Your timing could not have been more perfect. Two days ago, I forwarded the attached proposal to the director of a seminar on American literature and democracy. I think you’ll find in my proposal some interesting parallels with your cartoon. Can you send me a sample copy of your journal? If the library does not want to order a copy, my girlfriend and I may want to order a copy for ourselves.

I liked the Greta quote on the top left of the cartoon, though I fear that her message, like all legitimately threatening messages, has been commodified by late-capitalist culture.

But something would tarnish that openness. After years of experience, it was not difficult for me to locate Achilles’ heels. And so I read the proposal, “Robert Frost, John F. Kennedy and the Role of the Poet in a Democratic Society,” which is not online. In it, Hass noted that since the late 1800s poets have had an “antagonistic relationship with the state and decrying its abuses and injustices.” Sure, there may be a few examples, but the bulk of poets tended/tend to do the exact opposite. [Warning: Achilles’ heel!] For if they hadn’t/didn’t, how could they ever become tenured at, for example, Edinboro University? One would be hard-pressed to find a known poet who actually criticized the State poetry machine. After all, the State (e.g., National Endowment for the Arts and Library of Congress) has plenty of money to distribute to see-no-evil, speak-no-evil poets. Furthermore, is not the poetry establishment a de facto part of the State?

As for inaugural poets like Frost himself, they tend to be the safest of all establishment bards. Regarding President Joe Biden’s inaugural poet, Amanda Gorman, for example, examine my essay and aquarelle depiction. Clearly, besides being safe, Gorman was chosen due to her skin color and gender. In essence, for renown, she became a willing ornament for a life-time political hack. Since JFK, only the Democrat Party has highlighted such poets as inaugural ornaments. Clearly, it would not do that if somehow that didn’t help it gain power and, today, foster its identity-politics ideology.

In his proposal, Hass underscored that “Frost nevertheless composed ‘Dedication’ [his JFK inaugural poem] with the conviction that Kennedy’s election marked the ‘glory of a next Augustan age,’ an age in which ‘poetry and power’ would coalesce to extend the ideals of the nation.” Perhaps Gorman had the same conviction regarding Biden’s election. Absence of experience fighting the establishment could only elicit such naïveté. “Power” (think Stalin and poet Gorky), more than anything else, seeks domination, cooptation, castration, and corralling, the very state of poetry today in America.

“Kennedy reminded his audience [at the Frost Library at Amherst College] that the poet in a free society is the last champion of the individual mind and sensibility against an intrusive society and officious state,” noted Hass. Evidently, Kennedy was equally naive. The poet in our so-called “free society” has become anything but that. Again, Gorman serves as a cogent example. The poet instead has become a willing cog in our “intrusive society and officious state.” If he or she does not willingly do so, then he or she likely ends up cancelled. Why didn’t Kennedy instead anoint a poet who’d actually dared openly criticize him and his soon to be “officious state,” if in fact there even were any such poets?

“Frost in his old age perceived himself as a new American Virgil, and indulging this fantasy, happily placed his poetic gifts at the service of the new regime,” stated Hass. And, of course, I could certainly agree with that … for it clearly confirms my personal experience with poets today. However, Hass naively concludes: “I will argue that Kennedy’s reconsideration of the poet as lone dissenter who has the courage to challenge imperial power is an excellent role model for the artist in our own age of authoritarian peril.” Yet, again, such a poet who actually, truly dares dissent would inevitably end up ostracized. [Warning: Achilles’ heel!] Where is the poet in the English Department at Edinboro University, again for example, who dares criticize the department chair, the deans, and the university president? If he or she actually exists, how did that person manage to hide his or her critical nature for five long years in an effort to gain tenure? Hass never did answer that question. His only response was the following:

Thank you for your short essay. The fundamental flaw in your argument is that you assert, without a shred of evidence, that recognition / tenure and the truth are mutually exclusive. They are not. Keep up the good fight.

So, as someone who enjoys vigorous debate, unlike the bulk of professors and poets, I continued and emailed Hass again:

Well, I spent much of my life as a professor, who openly spoke truth, at the higher-ed institutions employing me, and also as a poet, who openly criticized the academic/literary machine. Now, do you think the latter rewarded me with “recognition” or rather with full ostracizing? My personal experiences led me to conclude that “recognition / tenure” and “the truth” will almost always conflict. Speak truth openly regarding the hand that feeds (e.g., the college/university in question), and it would be a very, very rare occurrence for a professor, who did that, to get tenure. Can you provide one example of a professor who openly criticized his college president and deans, then was rewarded with tenure? I doubt it! Leaders—academic and others—tend to be intrinsically corrupt. To rise to the position of college president or dean, one must turn a blind eye and NOT speak truth openly. Anyhow, thanks for the response.

Clearly, Hass wants to simply add to the glorification of poets in the same light, or rather darkness, of the Academy of American Poets, the Poetry Foundation, and the diverse societies deifying certain poets (Robert Frost Society!), for example, which refuse to post anything critical of the poetry establishment on their websites. The Academy actually censored my comments in the days when debate was part of its site (see theamericandissident.org/orgs/academy_american_poets.html).

Well, that was the end of our brief “conversation.” No further response was received. As for the “shred of evidence,” note the details and actual documents regarding my experiences as a professor at Elmira College, Fitchburg State University, Bennett College, Davenport University, Grambling State University and American Public University System. My questioning and challenging of other universities also add to that evidence (see, for example, Suffolk University, University of Massachusetts, and Tufts University). For further shreds, Hass ought to examine the websites of the Foundation for Individual Rights in Education (now called the Foundation for Individual Rights and Expression), Campus Reform, and The College Fix. As for the subscription suggestion, I’d written Hass that “Likely you and your colleagues would not appreciate the journal. However, if you are at all interested in truly opening your students’ minds beyond that which the literary establishment finds acceptable, then definitely consider subscribing to it! Thank you for your attention.” Hass never responded to that.