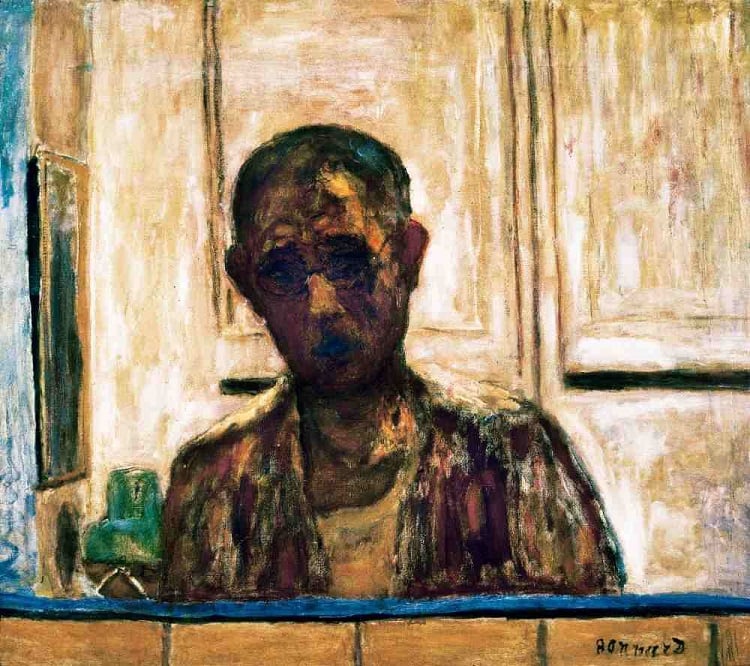 Self Portrait in a Shaving Mirror, Pierre Bonnard, 1935

Beth moved into the old house because the rent was low, money was tight and always, always getting tighter. But it was a pretty house and she loved the view of the river out of one of the kids’ bedrooms upstairs, so that’s where she slept. You could also see the river through the window in the upstairs guest bath, so she used that, too.

Since it was an old house, she knew there would probably be touches on her psyche. She was always sensitive to that kind of thing and had learned to put up with it. More people have died in an old house, for example; things like that.

At first, there was not much more than a kind of low buzz. Over the weeks, it became a little more like the distant murmuring of voices.

“That’s called ‘Walla,’” her friend Alma told her. “Probably because you’re sensitive to that crap.”

“It’s just voices talking all at once but you can’t really make anything out, you know? Like in a TV show or a movie; just the way you described it. Say, in a court room, the hubbub when the jury comes back in and the gallery starts muttering to each other all excited. You know, ‘sodawaterbottlesodawaterbottle,’ or they say ‘rhubarb’ or ‘peasandcarrots’ over and over—or they just let the actors improvise mumbling and muttering. If someone with hearing loss or tinnitus gets it, the docs call it ‘Musical Ear Syndrome,’ and if you’re dealing with a nut-case, then it’s an auditory hallucination. Do they say anything you can understand? Anything like, ‘Get a machete and cut Mom’s head off,’ or ‘They’re all out to get you—kill or be killed,’ that kinda stuff?”

“Nope,” Beth said, “not yet anyway. Can’t make anything out. Just lots of voices.”

“Well,” Alma said, “I bet it’s some kind of psychic background hum, like other stuff that you get. I hate to bring up a cornball cliché, but maybe something bad happened in the house?”

“Yeah, I was kind of wondering that myself,” Beth said.

Over the next few days, Beth checked the local news databases—nothing came up about the house. No killings, suicides, kidnappings, unexplained disappearances, or anything like that. But if anything had happened, maybe it just didn’t make it into the papers. So she asked around and made a special effort to talk with elderly people who had lived in the neighborhood a long time.

“Well, lots of families lived there over the years, just like all these houses,” an old man across the street told her. “You know, people moving in and moving out, kids growing up and leaving home. They used to have funerals in the front parlors a long time ago when someone passed away, but not for years and years. Is that the kind of thing you’re after?”

“You mean like someone blowing his brains out or hanging from a rafter? Lizzie Borden-type stuff?” he asked.

“Nope. A kid’s dog got run over last year, but that’s about it. Sorry to disappoint you. Not every old house is haunted, you know.”

The voices were so indistinct and jumbled, they seemed to come from everywhere—just sort of seeping into the house from the walls.

Beth wanted to see if she could pick out any individual voices from the jumble, even some stray words that might help her figure out what was going on.

So one afternoon, she stood still in the living room and did a series of calming breaths, just being open.

Then, she started to walk slowly through the house.

Focused like this, she discovered that the walla seemed to be localized. Not so much the volume, but the intensity of the murmuring wasn’t the same in every part of the old house.

She walked through the rooms, stopping every so often, closing her eyes, and then moving on.

The quieter areas all seemed to be on the ground floor. As she moved upstairs, the walla grew more intense. She opened the door to the attic and went inside. The walla dropped off. That was a big relief; like most people, she was creeped out by attics and it was good to know that whatever was going on, it wasn’t centered in the attic.

It stayed at about the same intensity as she walked through the kid’s bedroom she slept in and the guest bath she used, as well as the other kid’s room.

But it picked up when she walked into the master bedroom.

“Ah,” she thought. “Somebody did something to their wife in the bedroom? Several times, maybe?”

She concentrated so hard she made herself dizzy, but she couldn’t make anything out—just the same mumble and grumble, only more intense. Sometimes, she could pick out a sigh or a quick inhale like someone had been surprised—or hurt?

But then she found something that didn’t make sense.

She closed her eyes and breathed, focusing, walked into the master bathroom, and was practically knocked over.

The walla got much more intense. Still incoherent, but a lot more intense; like a big increase in activity and gain but not volume.

“What goes on in the master bathroom that leaves so damn many impressions behind? You’d think the master bedroom would be where the action is.”

“Nothing,” Beth said. “Time out—I walked out of there, it was too much. I couldn’t make anything out anyway—it was just like standing in a waterfall of static. Static with feelings.”

“OK,” Alma said. “What goes on in the master bathroom that would leave so many emotional imprints?”

“I dunno,” Beth shrugged. “Indigestion? Puking from being horribly sick or drunk or something? Passing out? Dropping dead? Self-induced abortion?”

“And you can’t make out any words still?”

“Nope,” Beth said. “And I don’t see anything either. Just feelings, impressions of experience and emotions, but all jumbled together and mixed up. Next time, I’m going to just stand in there and really relax, and try to see if I can grab some individual impressions.”

The next day she stood in the master bathroom, breathing slowly and moving around. The walla changed depending on where she stood in the tiny room—less over by the toilet, less by the door. Then, then she stepped in front of the sink—lots. Big walla.

Beth put her head down near the floor—less. She stood up slowly—more, more, and most as she stood directly in front of the medicine cabinet.

She opened it; there was nothing in it—no outdated medications, pill-bottles, old cosmetics, suicide notes, bloodstains, no diary, no nothing. Beth used the upstairs guest bath, so there wasn’t anything of hers in there, either. But there was definitely something going on in there—with the mirrored door swung open, it was like stepping right inside the walla.

She closed her eyes and breathed.

Bits and pieces of experience, along with feelings. Individual moments.

A young woman, frustrated, resentful. Thinking, “I don’t want to do this, why do I let myself get pressured like this, I just want to get into bed and read.” Along with a sensation of sensitivity and rawness under the arms. A sense of old times, maybe the 1940s?

A man, fearful, almost shaking, standing stock-still. “It’s probably nothing, just relax for fuck’s sake, why can’t I relax?” And something pressing on his neck. Also several decades old.

A young guy, teenager, very optimistic. “I bet I get lucky this time. Christ, we swallowed each other’s tongues last time, I bet she goes all the way this time. I gotta stop at the drugstore. I’m not stupid.” Cool sensations on the face and warmth of blood flowing through the groin. Felt like the 1960s.

Lots and lots of these snapshot-impressions—and they seemed to come to a dead stop decades ago with nothing much past, say, the early 1970s. That was odd. A kind of cutoff date. Something happened around 1970 that pretty much stopped the addition of any new walla.

She looked very carefully into the empty medicine chest.

Then, Beth looked at the bottom shelf.

She stepped back and swung the mirrored door shut, whispering, “Ooooohhhh. Aha. Yup.”

She hopped in her car and drove over to Bits ‘n’ PCs, the local computer store.

“I need a fiber-optic inspection camera,” she told the salesperson. “Something that’s at least five feet long with a very small diameter lens.”

“Well,” the man said, “we got them. Just plug into your phone—and we have one that will go through the eye of a needle.”

Back at the house she bounded upstairs, two steps at a time, and ran into the master bathroom.

She stood in front of the medicine cabinet, opened the door, and propped up her phone on the bottom shelf.

There, in the center of the back wall, just above the bottom shelf, cut into the metal, was a small slot.

Beth plugged in the camera, switched it on, and fed the optical cable through the slot, down into the wall behind the medicine cabinet—down and down.

And then she saw it.

A huge stack of old, discarded double-edged razor blades. Dating back to God knows when, used by God knows who. Hundreds and hundreds of them—a mountain of silver.

“All those people through the years, shaving,” Beth thought. “The blade touched them, touched their skin, and left an imprint of their thoughts and their feelings when they shaved.”

Beth thought about the individual impressions she’d gotten, and touched them again:

The resentful young woman who just wanted to get into bed and read?

“Ah,” Beth said out loud. The woman was being pushed into a blind date and would much rather just go to bed and read a good book. And the pricking and burning under the arms?

“She was shaving her pits,” Beth said.

The frightened man telling himself, “It’s probably nothing, just relax for fuck’s sake,” and the pressure on his neck?

“The poor guy had a shaving cut that wouldn’t stop bleeding and was pressing on it, trying to make it stop,” Beth said. “He was afraid it was skin cancer.”

“Shaving for a date, hoping to get laid,” Beth said, smiling. “The coolness on his skin was the shaving cream. Hope he remembered to stop at the drugstore.”

She also realized why all the walla ended abruptly around 1970.

“That’s when disposable razors hit the market,” she said. “And practically everybody stopped buying double-edged blades. When a disposable razor wears out, you throw it into the trash, and off to the dump it goes.”

She put her hand on the back wall of the medicine cabinet, closed her eyes, and said softly,

“Whatever happened to you in your lives, I hope you are all happy now.”

Then she took a picture of the pile of blades in the wall and sent it to Alma with the text:

“Let me know when you can meet—have I got a story for you.”