There’s Magic in the Air 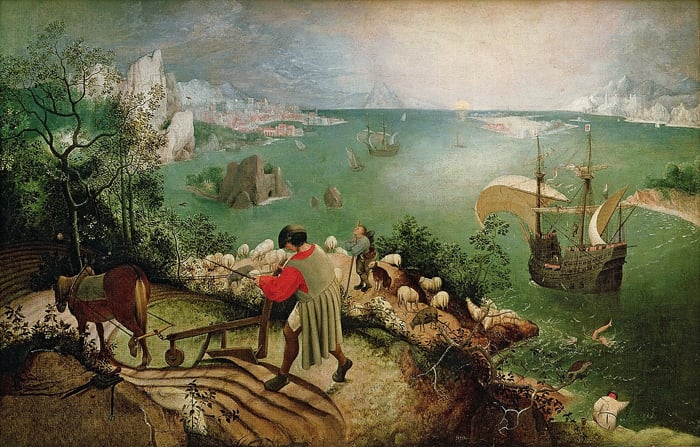 Landscape with the Fall of Icarus, Copy of Pieter Bruegel the Elder’s lost original, 1560s

Baldassare Castiglione, in The Book of the Courtier (1528) relates through one Messer Bernardo, the story of an abbot discussing with Duke Federico of Urbino the problem of what to do with a great mound of earth which had been excavated to make room for the foundations of the new palace.

My lord, I have an excellent idea where to put it. Give orders that a great pit be dug, and without further trouble it can be put into that.’ Duke Federico replied, not without laughter; ‘And where shall we put the earth that is excavated in digging this pit of yours?’ Said the abbot: ‘Make it big enough to hold both.’ And so, even though the Duke repeated several times that the larger the pit was made, the more earth would be excavated, the man could never get it into his head that it could not be made big enough to hold both, and replied nothing save: ‘Make it that much bigger!

We can laugh, as Renaissance era readers would have done, at the abbot’s singular lack of logic and understanding of elementary notions of quantity.  The thinking of the abbot in this story appears to be stuck somewhere between Piaget’s Sensorimotor and Preoperational stages (always assuming of course, that these are useful categories). To fully developed adults, such perceptions appear to be enveloped in a kind of magical thinking.

In The Abolition of Man, C.S. Lewis argues that magic and science were twinned at birth. As he puts it, ‘one was sickly and died, the other throve . . . But they were twins. They were born of the same impulse.’ It seems that magical thinking, having suffered some neglect for several centuries, is now back in vogue.

The painting Landscape with the Fall of Icarus (apparently no longer attributed to Pieter Breugel the Elder) depicts the ploughman wearily plodding behind his ox and the shepherd tending his flock, both ignoring or turning away from the magical world depicted in the upper portion (Auden says “everything turns away/ Quite leisurely from the disaster”). We can quibble about the word “disaster” here. It certainly was so for Icarus and for his father; but a new world was replacing the old. Yes, the sun, the star from which the planet Earth gets its heat, melted the boy’s waxen wings. The sixteenth century was on the cusp of new thinking and of scientific endeavor. Could this be a visual rendering of the rejection of the mythic and marvelous that had captivated previous centuries? Perhaps the painter was at least in part portraying the divergence of the mundane from myth and magic.

We have as prime exhibit of the return to a pre-scientific age, the magical beliefs associated with climate “science.” The presumption of Icarus led him to an early demise. The presumption behind climate hysteria is startling in its chutzpah, as well as being a reversion to earlier fairy-tale modes of thought. The proponents of these extraordinary claims believe that human beings are so omnipotent that not only can we heat the planet, we can do something to offset this apparent change in the weather patterns and make it cooler. Perhaps these devotees have lived too long adjusting the thermostats in their comfortable residences, or in the case of the Hollywood performerati, their mansions.

These same people rake through classic works in order to find inspiration. It has now become a cliché to point out that Orwell’s 1984 is used as a how-to manual by the radical left and their hive-mind followers. Jonathan Swift’s A Modest Proposal can still be appreciated as satire; but perhaps not for long, since these same individuals are, a little timorously at first, testing the waters. Satire or sense, alas!

And here is Marlowe’s Dr. Faustus seemingly anticipating the planetary-climate-control presumption by exclaiming:

All things that move between the quiet poles

Shall be at my command. Emperors and kings

Are but obeyed in their several provinces,

But his dominion that exceeds in this,

Stretcheth as far as doth the mind of man.

The current batch of would-be tyrants (some call them “globalists”) seem to have mined this monologue for inspiration. But they didn’t read to the end of the play:

O lente, lente currite, noctis equi! . . . The devil will come, and Faustus must be damn’d.

Nor did they notice the plunge of Icarus depicted in the aforementioned painting.

Such is the magical power of the post-religious narrative that much of the developed world has fallen for the absurd claims of an aspergeristic child, a kind of junior Swedish Dalek (Exterminate! How Dare You! Exterminate!). For those, who are not familiar with these popular cultural icons, Daleks are evil, extraterrestrial mutants residing in pepper-pot shaped vehicles. They have apparently conquered much of the known universe, although curiously, the configuration of their means of conveyance makes them incapable of climbing a short flight of stairs. They are reminiscent of the mutant frauds who have colonized much of our media-academic universe, but who are incapable of understanding elementary logic. These latter often display magical thought in the service of dominion that exceeds that of emperors and kings.

Yes, I know, I know, the Dalekette child is not fully responsible for the rubbish her manipulative parents and other overseers have chiseled from the base substance, like malevolent Michelangelos working on the living mind instead of Carrara marble. Were we fortunate that she was passed over for the greatly devalued Nobel Prize for Peace? I’m not so sure. Had she been chosen, she would then have been in the august company of Yassir Arafat, Al Gore, Barack Obama and the Guatemalan sham victim, Rigoberta Menchú. Just think, we could dub them, “Snow White and the Four Frauds.”

Of course, the West does not have a monopoly on magical thinking. It has been an element in much Islamic belief at least since the rise of the Asharite sect of the tenth century. Muslims such as Averroes (Ibn Rashd) who challenged the Asharites were exiled, ignored and probably worse, now very much the fate of anyone who challenges, for example and inter alia, radical feminists. Simply put, rational thought was sidelined and has never really made a strong come-back in these still more benighted quarters of the world.

Read more in New English Review:
• Liz Warren’s Immoral Desire to Sell Out Israel
• Looking Older in the Past
• The Only Way to Win is Not to Play

And despite going at it hammer and tongs, mind you, we still have some catching up to do. Curiously, the magical thinking of the “peaceful creed” is in some ways at the other end of the spectrum of rational thought from that of the Western clerisy. For the devout Muslim, humankind can do nothing without Allah. As Robert R Reilly states in The Closing of the Muslim Mind, “without causality in the natural order, anything can come from anything, and nothing necessarily follows.” Anything can happen and nothing can happen—it all depends on what Allah wants at that moment. In a previous New English Review article (Shrewd-Eyed Dwarf, December 2017) I have discussed more fully Reilly’s examination of how such thinking leads inexorably to the loss of epistemology, objective morality, justice and free will, in at least the Sunni strain of the still-spreading creed.

Are we there yet, Daddy, are we there yet? Not quite, but when we learn that there are as many genders as Heinz varieties, and that mathematics is racist, and so on, we must try to keep calm and carry on. “Peoplekind,” it seems, can indulge in spectacular manias, including the belief that we can alter the climate patterns of the whole globe. To take a more trivial example, we can stop the buildup of plastic waste in the oceans by banning the use of plastic straws in such enclaves of silliness as coastal California, but not in Asia. Or we can believe any of the baloney spouted by the mostly very peculiar line-up of individuals voicing their opinions at the recent Democratic “debates.” Like Walter Mitty their heroic daydreams pay little attention to reality, but unlike those of Thurber’s character their fantasies have potential catastrophic outcomes.

But into this dish she introduced a powerful drug, to make them lose all memory of their native land. And when they had emptied the bowls in which she had served them, she struck them with her wand, drove them off, and penned them in the pigsties. For now to all appearance they were swine. (Translation by E.V Rieu)

In the epic, Circe fails to turn the captain into a pig, the cunning Ithacan having first ingested or pocketed (Homer frustratingly doesn’t say which) the enchanted root of moly presented to him by Hermes.

How about a new marketing ploy which spreads the nutritional benefits of moly root? We can call it ‘Holy Moly.’ This would be eagerly purchased by members of the hive mind, especially if advertised as organic, gluten free and vegan. If only we could discover what this thing is!

Perhaps the most urgent and frightening example is the magical belief that we can salve the guilt of Germany (or other nations, whether guilty or not) by inviting into Europe whole armies of military age youths from alien cultures, most of whom will never be culturally integrated. And whereas advocates of the religion of peace reject notions of cause and effect without the intervention of Allah, the advocates of climate hysteria in contrast seem to be overburdened with an almost magical confidence in their ability to maneuver variables to produce the desired global effects. They have fallen for it hook, line and sinker, like shipboard passengers gaping at the Port Said gully-gully men whilst waiting to thread the Suez Canal, behind them the last of England, the last of Europe. Mesmerized, they would watch these magicians perform rope, card and coin tricks, and finally produce chickens out of thin air. And mesmerized now, the Western populace, lacking the cunning of Odysseus, watch as the magic pills they have swallowed render them incapable of observing the great mound of earth excavated from the large pit built to hold the foundations of a new palace.