To Love and Be Loved 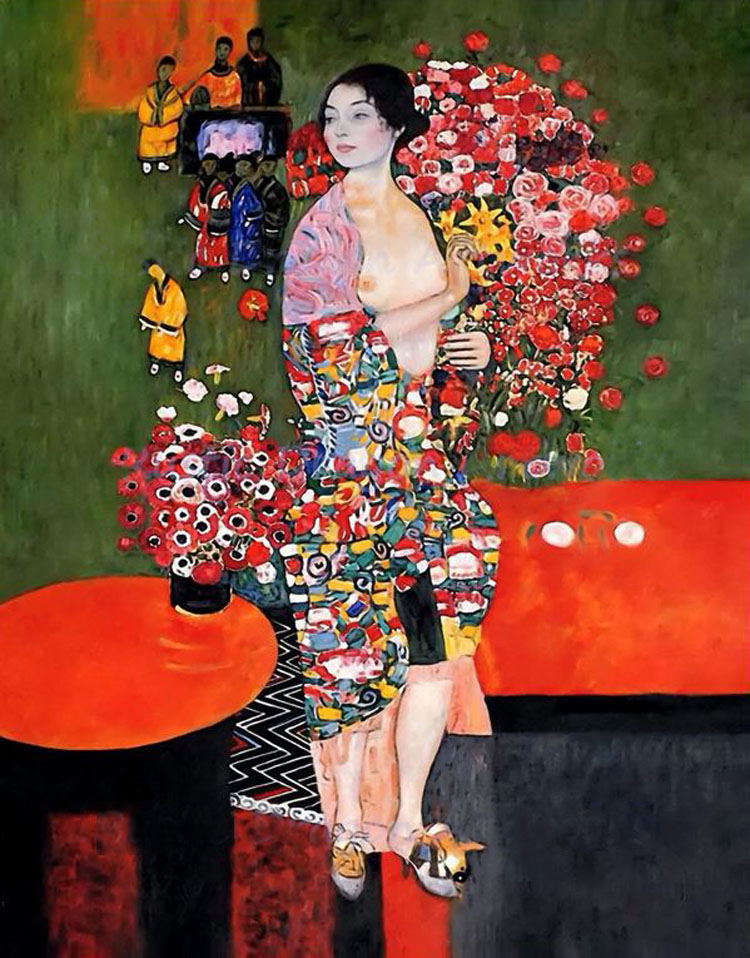 He sat there sipping his tea. He was about 30 years old. He had a few silver teeth; pitch black hair and he was skinny. On his left, the Gnawi were playing their drums and large metal castanets. They danced in a line and sang their songs in Arabic but with the distinct West African melodies of their ancestors who had once been mercenary slaves brought across the Sahara by the ancestors of today’s Moroccan kings. They were good exorcists and added to their tourist donations by going house to house and calling out evil spirits that plagued their lighter skinned urban, Arab neighbours.

Hamzah thought to himself, “It is better than making kababs.” He ran a stand where he sold North African flavored kababs on sticks. The tourists were all over the Jmal Fna that summer watching the acrobats, the Gnawi, the Soussi musicians with their one string fiddle the amzhad and who called on the blessings of the saints which they conferred upon those who asked and who also paid them for their service.

The large open plaza was a kind of living circus with fire eaters, pick pockets, food stalls and story tellers who still captivated the semi literate Moroccans of African, Berber and Arab descent whose toil and sweat still made the city of Marrakesh tick-painters, carpenters, coppersmiths, brick layers, restaurateurs, men who ran the meat market and boys who sold fruit and vegetables, women old and young who cleaned the houses of the wealthy and those lucky high school graduates who knew how to use a computer and who listened to American music on their headphones but if male, insisted that their wives be virgins on the first night of marriage.

It was getting hot and the sun created zebra like shadow stripes on the edge of the plaza where the municipal authorities had put up Venetian blind-like coverings to break the sun and give those on the edge of the Jmal Fna a cousin of shade to wait out the heat of the day. 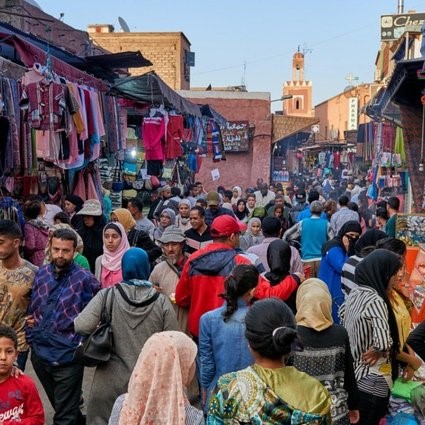 Hamzah was 30. He was unmarried. He was not inexperienced in the ways of women as there were always the Sheikhat, unmarried women who sang and danced at weddings and whose reputations for loose living were rampant. So many of them came from broken families or had been expelled by their families for suspected premarital romances. One of them was called Rita.

Hamzah had seen her off and on. She was his favourite. There was something different about her. She radiated light, peace and joy despite her conflicted way of life. If she had come from a respectable family and if he thought that she had not slept with so many other men before him he might have even considered marriage. But even a seller of kababs must have standards and what would his family say if he brought her home? He banished Rita from his thoughts and started cooking furiously as a group of Italian tourists ordered fifty kabobs that they wanted ready in 30 minutes.

The day before the Emir of Qatar had visited Marrakesh. He drove through the new part of town in an open convertible. He stood in the middle of it, surrounded by armed bodyguards in his puritanical white garb and eastern Arab head dress. He gesticulated to the crowd with one arm then with the other. The crowds that lined the street broke out into Flamenco like syncopated hand clapping that is done during weddings and circumcisions.

Hamzah thought to himself that it was good that the Gulf states respected Morocco. Sometimes Moroccans did not feel completely Arab. One fourth of the country was Berber and the Arabs looked more European given the thousand years of white slavery that existed until the mid 1800s. Hamzah thought the blue eyed girls of Fez must be the descendants of Spanish slaves. Ah he thought. “Those were the days.” Now it takes a lot of money and lot of smugglers to work in Andalucía. Hamzah felt that he was born a thousand years late. ‘We once ruled there!’ He muttered to himself.

It was two in the afternoon. The square was deserted. You could hear the donkeys snorting at the edge of the square where the firewood carriers were resting. The sky was hazy and it was hard to see the Atlas mountains to the south of the city which during the winter were clear as day with their snow covered peaks that looked as if you could reach out and touch them.

An older woman in the traditional Moroccan dress and veil which made them look like 19th century European nurses asked Hamzah for four skewers but said, “I do not have money” Hamzah asked her. “Are you expecting a Koranic act of charity or can you pay me in some way?” “I am a fortune teller and mind reader and can tell you your fortune for four kebabs,” she said. “Waxa”—ok Hamzah spit out in the guttural Moroccan dialect of the streets.

Halima the fortune teller sat down at his picnic table like stall and began to speak.

“It began in the 1950s. Your Berber father had come down from the mountains and married your poor Arab mother. They did not get along. She bore him four sons and one daughter. The eldest son died when you were ten. Your parents divorced and you lived with your father and his father’s family. You became a pickpocket when you were in late primary school but stopped when a friendly policeman and blood relative caught you steeling pottery from a kiosk to resell to tourists. You worked illegally in an orange grove in Andalucía and then came back here to Marrakesh to take care of your elderly mother.”

Hamzah was stunned. How did she know these things? Had she been studying him for some sort of scam? He asked her to describe the ferry from Tangier to Algeciras. She described it in detail and told him, “When you left Tangier were there not four American hippies with long hair who screamed ‘Fuck off Morocco!’ and nearly caused a riot on the boat?” Hamzah went as white as his olive skin could go.

Fearing witchcraft he asked her, “What to do you want?” She spoke. “I am old. All my immediate family is dead. I need a room to grow old in, a place in a family, adopted children and grandchildren to take care of, to love and be loved. Something to make me happy in my old age. I am sixty and will never have children, but I can sometimes see the past and sometimes the future. It does not always happen. My gift is inconsistent and although I am a fortune teller, sometimes I am wrong.”

Hamzah caught his breath and told her. “I want a wife. I want a bride. I want children. I want to be normal. I want to be like everyone else. I am not an individualist. I want to me known as an honest man amongst the men I visit the mosque with. I want to go to the hammam bath once a week. I want to take my children to school. I want to create a network of kabab sellers, what the Americans call a “franchise.”

Halima said to him “You will have all that and you will give me my room? Won’t you?” He put his hand on his chest and swore on it. She left. Before they parted she said, “The woman you marry will wear a green and purple scarf.”

Hamzah began building his network. He got a loan from the Gnawi dancers. He set up young high school dropouts from around the city at strategic points around the plaza and slowly built a profitable business. He insisted that his proteges go to night school and soon they had second jobs and invested in his business. Within a year he was an upcoming entrepreneur know as the “King of the Kababs’ by his bemused neighbours in the Jma.

Still unhappy in love he decided to go on pilgrimage. He swore an oath on the grave of Setti Fatma to find a bride. Setti Fatma was a Berber saint in the high Atlas and he walked on his pilgrimage to the site during the saint’s Moussem or annual celebration. After dancing and singing and eating the sacrificial meat of his offering he fell asleep under a tree and dreamt of Rita. She was wearing a green a purple scarf. He woke, could not get her off his mind and hitched a ride back to Marrakesh.

Rita was now twenty. She was the delight of her now happily remarried parents. She worked hard and studied hard. One day when she was fourteen visiting the Jmal fna she had bought a kabab from Hamzah. She thought him to be the most handsome man alive. She imagined he may have married her had she waited but lost all sense of control and allowed him to take advantage of her. He was always kind gentle and compassionate when he did.

She made up a story that she was a Sheikhat, a loose woman who sang at weddings and showed up mysteriously in Hamzah’s room now and then until, not being able to take it anymore, she disappeared. He couldn’t find her anywhere in the city. As the gossip about the new rising entrepreneur spread across Marrakesh some families approached Hamzah hoping he would marry their daughters but none suited him.

About a year later Rita showed up at his kiosk. Hamzah could not control himself. He took her to a side road and they kissed passionately. He asked her to marry him. He said he could live with her past if she would be a good wife. She then told him her story.

She had first seen him when she was ten and then fell in love with him when she was fourteen. She confessed that she had trailed him, stalked him, seduced him and then told him lies when she had compromised himself. She also told him that she had never slept with another man but could not marry unless the man in her life would allow her elderly aunt to live with them, as she was like a second mother to her. Rita was wearing her best green and purple scarf. Hamzah hardly noticed.

Hamzah took out his sebsi, his traditional Moroccan marijuana pipe. He began to smoke and entered into a light reverie. He had never felt better in his life. He knew Rita was “the one.” He sat down beside his bride to be and asked her to go over the details of her story. It all began to make sense. He could not stop laughing and after a few more pipes he got very hungry. He helped himself to a generous serving of his own kababs and sent a young boy to get some ice cream for Rita.

The wedding was the biggest event of the year and was celebrated by all the dancers, acrobats, merchants magicians and fortune tellers of the Jmal fna. Hamzah and Rita have two children and are doing well. Her aunt has a room in their house.

She no longer tells fortunes.