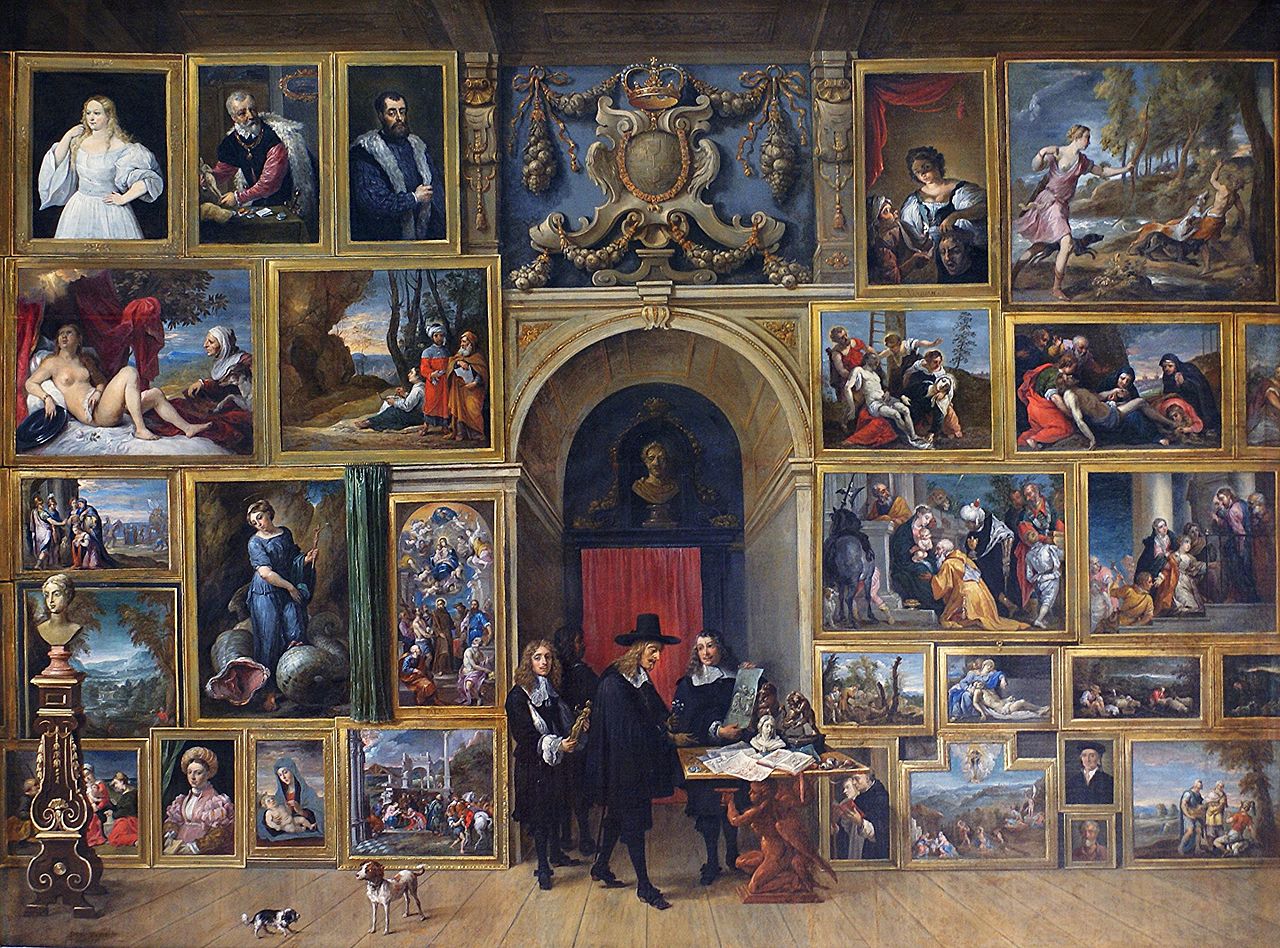 Gallery of the Archduke Leopold Willem in Brussels, David Teniers the Younger, 1651

In the December issue of NER, I described the propagandistic intentions of the Museum of Permanent Revolutionary Consciousness in a city in what was then communist-controlled Eastern Europe. But what can be said about some museums of the relatively open West? I recently visited a heavily-endowed Museum of American Art which, like many other such institutions, I gather, has been studiously propagating a mission far removed from what most of us would have imagined is a museum’s usual sphere of interest. It is not my intention to discuss the art works per se, which ranged from Pre-Columbian all the way through to very contemporary. But I include here some of the labels (also sometimes known as ‘tombstones’) presented by the curating staff for the edification of the visiting public, be they virtual or real.

The website of this museum proudly displays the truly absurd quasi-Marxist slogan “BLACK LIVES MATTER.” So, before even physically entering the institution, my wife and I were sorely tempted to give it a wide berth, as presumably would any averagely sane member of the public. But we soldiered on, temporarily casting sanity aside.

The mission statement of the museum is a specimen of a confused and dangerous thinking.

Guests? That sounds like a threat. In what sense are we guests? By this term, the youngsters who penned that statement presumably mean the category known as ‘white people,’ perhaps themselves included. These credentialed products of the University of Interchangeable Parts with their manufactured notions, probably have roughly zero knowledge of the settlement activity or early migration patterns into North America. Is not everyone who came to live in this region, indigenous or not, a settler—and therefore, stretching to their distorted definition, a guest? Or is it just those with the wrong skin color? The statement goes on with a bold invitation to slumber:

We are conscious of the role in colonization that museums have played. As cultural institutions, we have a responsibility to engage in the dismantling of historical and systemic invisibility of Indigenous peoples past, present and future. We choose to intentionally hold ourselves accountable to appropriate conversation, representation, connection, and education to facilitate a space of measurable change.

Don’t you especially love the words ‘dismantling’ and ‘systemic?’ As a species of the worst kind of virtue signaling and white guilt this paragraph is hard to beat. Apart from being just plain silly, the emoting is bad enough to have been copied and pasted into Michelle Obama’s Princeton senior year thesis. Why not just say something like, “We are bad white people. We have always been bad. We’re going to change all that. And did we mention that we are bad because of our skin color?”

Incidentally, we made a cursory tally of the number of “ethnically diverse” visitors to the museum. True, this was during the days of Wuflu distancing, and the numbers had been curtailed somewhat. Nevertheless, I estimate conservatively, that we saw two or three hundred gallery-goers during our three-hour stopover to the ‘social distancing’ cafeteria, galleries and surrounding parkland. We espied only one of the category favored by the wokerati. And that masked man was South Asian. This is strong evidence that, if the goal was to attract non-white or so-called indigenous ‘peoples,’ then the propagandistic intent has failed dismally. Perhaps these missionaries of malice are very much blabbering to themselves then. Alternatively, they may not be trying to lure in a more ‘diverse’ clientele, but rather to disseminate white guilt in ever more niche environments.

As we perambulated the galleries, we noticed that the labels accompanying the artworks gave evidence that the curatorial staff couldn’t leave well enough alone; the objective of broadcasting virtue tinged with silliness to foist on the unenlightened public became truly irksome.

Here are a few examples. The first exhibit label set the tone for many of the remainder.

Nari Ward’s artwork, made with multicolored shoelaces connects present to past and encourages us to reconsider how this historic text (We the People) resonates today. Nari’s use of the shoelaces reminds us that American democracy requires embracing all of our individual differences, reflecting a shared American history in all its beauty, messiness, sadness, and triumphs.

Why do we have to ‘reconsider’ that? This word and the weasel words ‘reminds’ and ‘embracing’ produced in me a slightly unsettling feeling as when we are faced with something we believe may be phony—rather like that evinced by an unsolicited phone call from a solar panel or insurance company cold-caller, or other such invader of our private space. We feel a tiny frisson of joy in blocking the offending party in the forlorn hope they won’t bother us again, usually to no avail.

Despite this inauspicious beginning, we were prepared to delve deeper into the agitprop smugly pasted on the gallery walls beside the art works about which they were ‘educating’ the public.

Next, there was a portrait of George Washington. The label included the following sentence:

However, North America had a long history prior to colonization. Indigenous peoples were here centuries before President Washington took office.

Really? Did you know that? Does any eight year old not know that? The patronizing tone of this sample of ‘informatsiya’ aroused in us something approaching mild nausea.

Why had this visual portrayal of such a racist, slave-holding monster not been removed to a dark store room, so that we did not have to be subjected to and gravely offended by his evil Trump-like visage? Perhaps the immense fee paid for the painting’s acquisition gave the curating staff some pause.

Several gallery labels implied strongly that the most pressing issue in the American culture is either racism or the ignorance of people (white people) about the pervasiveness of white oppression. You would think that visitors to the museum hadn’t had this stuff stuffed into them a hundred times before. The curators are clearly of the Howard Zinn or critical theorist generation of dupes. It is as though Beavis and Butthead had died, fragmented into a thousand parts, and then been reincarnated into the brains of ‘woke’ professors of humanities throughout much of the Western World. At least, the fictional cartoon comic duo provoked laughter at times.

Here is a pronouncement about another black artist:

He completed his studies in France, where he lived for most of his adult life. The vitality of the French arts community and relative freedom from racism help him earn a level of success unavailable to him the United States.

Note the word ‘community’ which creeps in everywhere les nouveau stupides are probing for weaknesses in our limbic systems. Yes, race prejudice existed and perhaps still does, most especially in ‘communities’ which were once the objects of discrimination. But in France? No, never there.

Another exhibit tombstone informs us:

No matter how artists responded to notions of beauty, almost all represented white subjects, and were biased to standards of beauty based on classical models. There was little room for diversity in style or subject.

It seems these cultural stewards have racism stamped into their DNA or something. Can they utter a sentence without diffusing their obsessively foolish prattle? There were several more labels of this ilk espousing similar virtuous sentiments, some brazen, some more subtle.

Expansion, conquest, and settlement of the western frontier shaped national identity in the nineteenth century, and was a popular subject.

Well, yes, but ‘expansion, conquest, and settlement’ has been true throughout the entirety of world history and before, hasn’t it? Oh, silly me; it was a white colonialist enterprise, only.

Of course, the now perennially popular theme of gay rights gets a look in. Here is a description of a sculpture of Sappho.

Sappho is admired not for her appearance . . . but as a major figure in queer history and literature. The term “lesbian” derives from the name of the island where she lived, Lesbos.

You don’t say! Oh, please. If children haven’t had that very important fact drummed into them by fourth grade, the public schools must be really neglecting their duty to mislead the minds of the youngsters held in their icy embrace.

Incidentally, at one point, just to cap off the feeling I was being got at, my ‘facial covering’ slipped while I was peering closely at a 19th century depiction of indigenes (wearing red face paint. Or was it black? The horror! The horror!). Of course, there was an obligatory remark on the label to the effect that the artist was ‘mindful of his white audience and created an unrealistic vision of indigenous life.’ Whatever. Anyway, unnoticed by me, a guard crept up and rasped in my ear, rather harshly I thought, ‘Put your mask up.’ And he was much closer than the ‘social’ distance guidelines permit. If this is not petty authoritarian overreach, I do not know what is. But these are the times we live in apparently.

What John Keats said about poetry we should proclaim about all cultural spaces, “We hate institutions that have a palpable design upon us.” I won’t go on cataloging any more of the Pravdas strewn along the gallery walls in between the exhibits. This particular institution is just one example of a sensory world now suffused with propagandistic cultural exhibits that are designed to lull our critical faculties. Like it or not, we are being subjected to system of “permanent revolutionary consciousness,” just as the citizens of communist regions once were.