Toward Brexit: The Duffy Decade 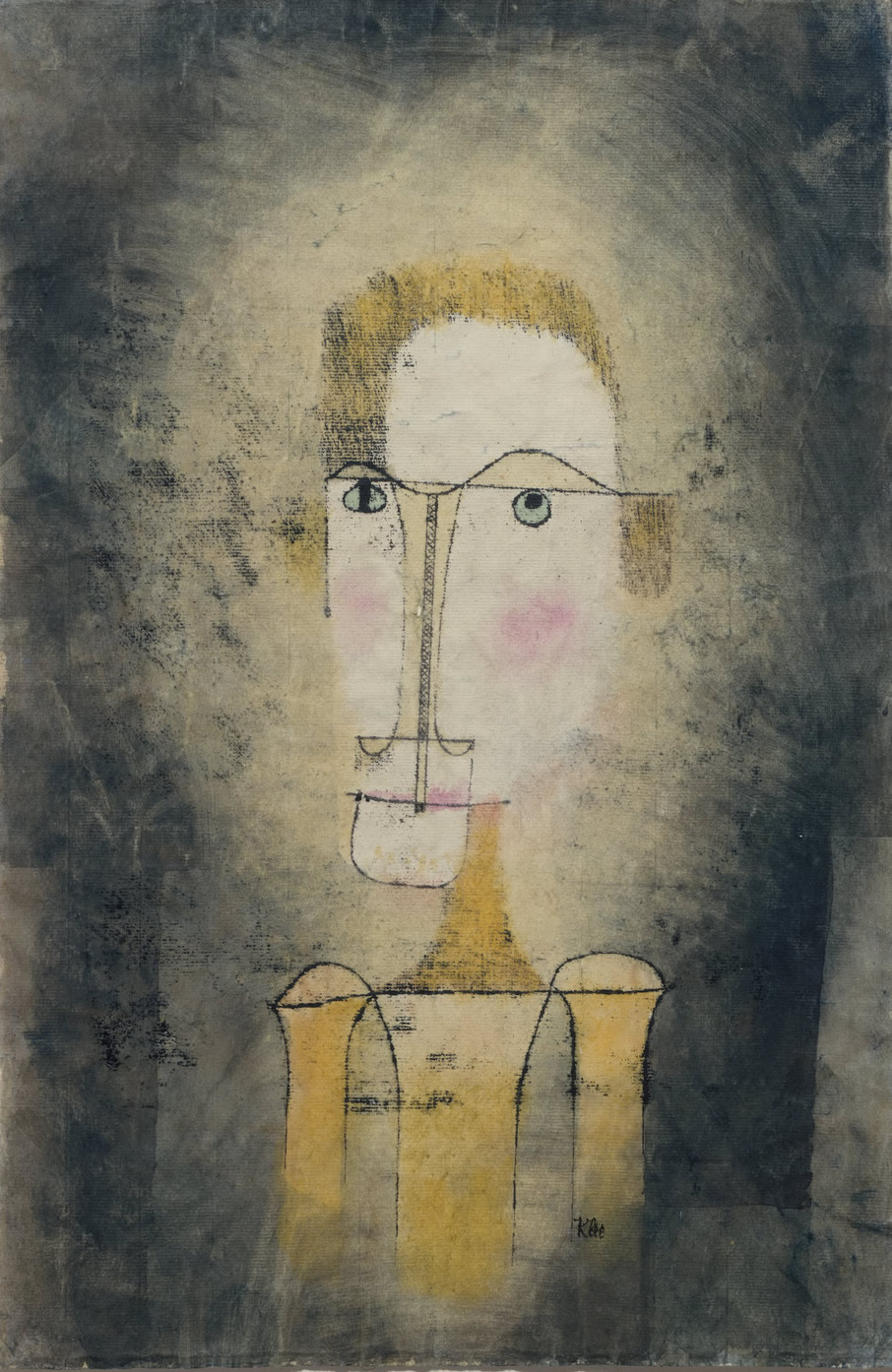 “I know nothing so abject as the behaviour of a man canvassing for a seat in parliament,” said the curmudgeon Matthew Bramble in Tobias Smollett’s novel The Expedition of Humphry Clinker. Anyone who has observed these wretched deceivers and lavish promisers debasing themselves in the filthy streets of their neglected constituencies, or seen them babbling their way through television interviews and, worst of all, audience questions, knows how true this is. A particularly infamous example is when Gordon Brown, Labour Prime Minister at the time, visited the post-industrial town of Rochdale as part of the 2010 general election campaign. Many readers will be familiar with Rochdale: it was one of the towns where dozens of young girls were systematically raped and abused by (mostly) Pakistani men. When Gordon Brown was campaigning in 2010 reports of this massive abuse were still being ignored and the general public were therefore unaware of its happening, but the problems of mass immigration—of which the abuse by some Pakistani men is but one particularly horrifying aspect—were already known widely, and were superciliously dismissed by those in power (even more so than today). 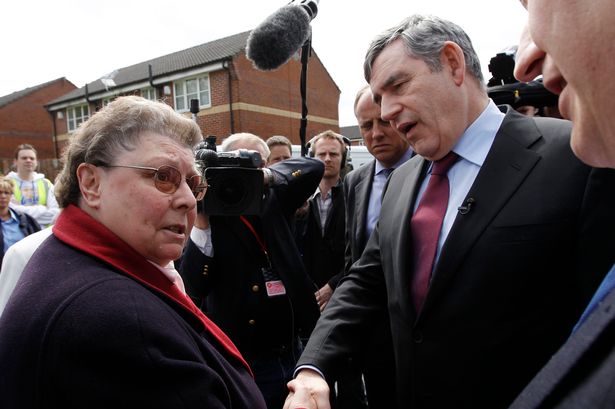 So when Gilian Duffy (see Left), a 65-year-old life-long Labour supporter, began to question Brown on the streets of Rochdale about mass immigration, live on television, one can imagine his discomfort. Duffy first complained that she is now “absolutely ashamed of saying I’m Labour.” (Sound familiar?) She was sceptical about Brown’s claim that “if you commit a crime you’re going to be punished.” “I’m afraid I don’t think it’s happening in Rochdale,” Duffy replied. She then complained about immigration, particularly the effect it has on benefits. She bemoaned that “you can’t say anything about the immigrants because you’re saying that you’re . . . but all these eastern Europeans coming in, where are they flocking from?”

Openly criticising immigration is of course one of the cardinal sins of modern politics. Following this exchange Brown pretended, in a way that for him must have felt terribly humiliating, to be friendly to this poor paleolithic creature before him, enquiring about her family and her grandchildren. But once he was safely in his car, he let out the vitriol that, unbeknownst to Duffy, was seething throughout the entire conversation. Fortunately for us his comments were recorded as he had forgotten to remove his microphone:

Gordon Brown: That was a disaster. Should never have put me with that woman. Whose idea was that?

Unknown male: They’re . . . pictures. Not sure if they’ll go with that one.

Gordon Brown: They will go with it.

Unknown male: What did she say?

Gordon Brown: Everything. She’s just this sort of bigoted woman who said she used to be a Labour voter . . . Ridiculous.

Duffy heard it all and was incredulous. “What was bigoted about what I said?” she asked, obviously upset. It is a question many of us have been increasingly asking ourselves over the course of this decade, on issues from immigration to transgenderism to racial and gender quotas.

If a political side keeps calling its supporters bigots and dismissing their views it will eventually lose their vote. Voters’ tribal loyalties tend to endure for a remarkably long time, however, and it is only now that we have finally begun to see the revenge of the Duffys of this country. Many of these lifelong, often working-class Labour supporters have abandoned a party that despises them. They first found a blunt but effective weapon with the 2016 referendum, clobbering the ruling factions of both parties. The importance of this referendum was such that when Labour became unwilling to honour the referendum result, many Labour voters made the once-unthinkable and very reluctant decision to vote for the Conservative Party. It is one thing to abandon one’s party, quite another to vote for the enemy. They realised that people like them—old, white and traditional—are at the bottom of the heap in modern left-wing politics, holding back the forward march of history. They felt—rightly—that most of the Left just will not listen to them. (Whether or not the Right will listen remains to be seen; I very much doubt it.)

We have therefore seen a rather peculiar revolution in British politics. The two main parties, which at the beginning of the decade both looked in very ill health, have survived by way of a sort of role reversal. Labour increasingly dominates London, and the Tories now increasingly command majorities in the North. These are unprecedented majorities in constituencies the Conservatives have not held for several decades—and in some cases never held before. It is not unlike in American politics, where Republicans took over the South and Democrats (albeit sometime later) took over the Northeast and many of the coastal states. I would not be surprised if in the 2020s we see some of the home counties begin to turn Labour or Liberal, and the North steadily turn more Conservative.

The political battlegrounds in British politics, ideological as well as geographical, are obviously changing. This decade has seen culture overtake economics as the issue of primary importance. Immigration, crime, sexual politics, climate change are much more prominent in public political discussion than debt or taxes or even welfare spending. What really seems to agitate people now is either a sense of cultural loss or an enthusiasm for cultural change. Corybn’s economic policies were indeed broadly popular, but they were not as important as Brexit and the cultural issues which surrounded that vote. It is also true that Corbyn, being whatever the opposite of a patriot is without quite being a traitor, hardly appealed to traditional voters who may sympathise with much of his left-wing economic politics, but cannot stomach a man who sides with those who wish the United Kingdom ill.

If the Left continues in this direction it will likely mean the irreversible loss of its traditional constituency. The Left always believes that their policies will win them nationwide majorities. They always think they are the true democrats, the ones who have the truly popular ideas—yet culturally left-wing politics seldom win elections. Across Europe it is the right-wing parties that are increasingly electorally successful. In this country the Left has only been successful by way of stealthy politics and bypassing democracy. No one voted for the liberalisation of abortion or the abolition of the death penalty; these polices were not contained in Labour’s election manifesto. Nor was mass immigration or the end of traditional policing. As the Left like to say about those who voted to leave the European Union, if you voted Labour you probably did not know what you were voting for. Labour voters like Duffy are finally realising how they have been betrayed and deceived, and the Tories have therefore cunningly realised that a blend of social conservatism and economic leftism, however superficial, is an electoral goldmine.

Yet Alexander Boris de Pfeffel Johnson, a liberal capitalist former mayor of multicultural London, is hardly an effective or believable spokesman for the Duffy worldview. On immigration, Johnson is advocating a points-based immigration system which could quite possibly increase the number of migrants to the UK (the number of migrants per head in Australia, which is usually touted as the model points-based system, is far higher than in the UK). Can our relatively gentle politics survive even more mass immigration? How much is too much? Our leaders are not even ready to countenance the idea of “too much” immigration.

Just as voters became disenchanted with Tony Blair, they will become disenchanted with Johnson. As far as I can tell, Johnson is a further continuation of the Blair years. His self-declared “People’s Government” is a pathetic impersonation of Blairism. Like Alistair Campbell under Blair, Johnson has his own poisonous special advisor in the gnarled form of Dominic Cummings. And so I very much doubt a Johnsonite government will discontinue the Blairite policy of mass immigration.

Naturally I did not vote in the last election. To again quote Matthew Bramble, “I look upon both candidates in the same light; and should think myself a traitor to the constitution of my country, if I voted for either.” Maybe in the coming decade traditional voters, having rejected the Labour Party in the 2010s, will also have the good sense to reject the Conservative Party in the 2020s. We might then have a chance to form an adversarial politics that actually represents the divisions in our country. Or perhaps Matthew Bramble is right, that “we [electors] all are a pack of venal and corrupted rascals; so lost to all sense of honesty, and all tenderness of character, that, in a little time, I am fully persuaded, nothing will be infamous but virtue and public-spirit.”