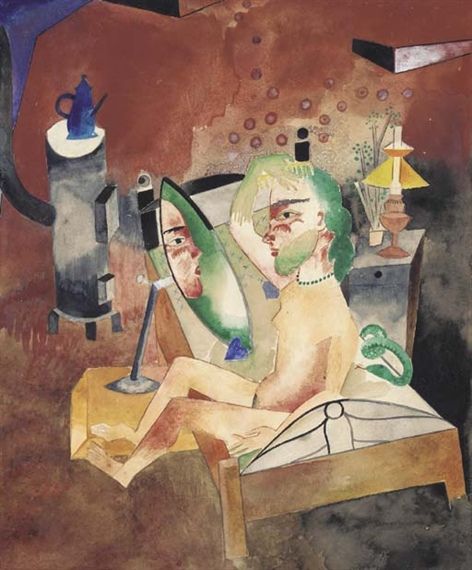 In the Mirror, Heinrich Campendonk, 1919

A bug died in my coffee
and tied up my whole morning.

Well, it’s a hard go.
There are a zillion bugs in the world
and they all have to die.
There’s a thousand interruptions,
if you have the patience for it.
Every tree has to fall.

There’s a purpose to everything,
I’d suppose.
Though I doubt I’d like it.
There’s a long pause
before the big decisions are made,
I hear.
Frequently, even the tapping of a pen,
if there’s a signature required.

Sometimes I’ll walk around at night,
because it feels like I’m cheating . . .
getting a leg up, you know.  So

how long before my piece doesn’t fit
the jigsaw of others’ lives?

A quality which marks Appalachians
is their high-handedness.
They’ll tilt their heads back to respond,
as if a retort were a reply,

and converse as if staring from a poolside recliner,
with fat limbs and tattoos . . .
Well, what the hell? You live in ugly homes in blighted areas
and drive rusted trucks, most people would say.

Appalachians will expect people to be obliging
but react as if being bullied when pulled up short.
“Who are you to come in here and ask me that?”
They’ll gossip, quarrel, and stare suspicious from porches,

from which they’ll share a limited number of interests,
and spit.  And the receptionists and quick stop attendants
often act as if somewhere between saying something,
and you’re not being worth their time.

God only knows!  But they do spawn an inordinate
number of preachers—damned determined individualists,
following parole and felonious intentions
such as embezzlements—to right the error of our ways.
Who are petty frank in their demands, also.

PrevListening to Poets Talk
92 and Not Dead YetNext