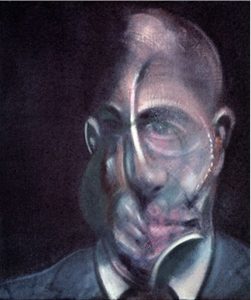 While there was a man I thought was my boss,
In point of fact, there wasn’t one, but three
Distinct persons my mind had synthesized
Into one. I’d start a conversation
With the first, finish it with the second,
And reference it when chatting with the third.

And neither the first, nor second, nor third
Knew they were thus unselved into “The Boss”
As far as my mind (scarcely a second-
Rate instrument) was concerned. Behold three
Faces, bodies, modes of conversation:
Added, divided by three, synthesized.

And, notwithstanding what I’d synthesized,
It gets even worse: for neither the third,
Second, nor first pleasant, conversation-
Ready hominid was my actual boss.
He was quite distinct from the other three,
Plainly unlike the first, third, or second.

But I wouldn’t have waited a second
In affirming I was liked … synthesized,
As this opinion was, of nearly three
Months—or two? one?—at the job. On the third
Day of work, I discovered that “The Boss”
Was always up for a conversation.

To Him-Them, the earnest conversation
Sounded quite like this:—scarcely a second—
And neither the first, nor—my actual boss—
Distinct persons my—what I’d synthesized—
In point of fact, there—second, nor third—
Plainly unlike the—concerned. Behold three…

Although I can make one man out of three,
I can’t do the reverse. Conversation
With my absurd psychiatrist (my third
In as many years) takes a mere second
Showing that everyone is synthesized
Of many. To ourselves, we’re all “The Boss.”

At what exact dimensions does a man-
Ufáctured lake become the subject of
The moon’s tide-kneading? In the skyward span
Describing some technology’s advance
Into Complexity, at, beyond, above
What point does the contraption seem a spill
Of magic, and a Function seem a Dance?

Are you familiar with Cameron’s
Albumen-silver likenesses of Sir
John Herschel? [1] Vague Existence somewhere dons
Its notional line, aphorism-thick,
That separates appearing like an ur-
Prophetic (billowing, sufficient, still)
And looking frankly like a lunatic.

Say who’s the last man slaughtered in the War,
And who’s the first killed in its Aftermath.
At what specific borderline does your
“Excuse” become a “Reason”? Let me learn
The contour interposed between the Path-
Ológical and, well, the Merely Ill.
We must deduce this is a real concern,

For we extol the Lord-Who-Separates:
The Sacred from the Secular, the Light
From Darkness, Israel from the Other States,
The Sabbath from the Days of Making. We,
It seems, however, only do recite
Appreciation for the golden thrill
Of things He doesn’t do, or we can’t see.

The summer evening wears me like a ring.
However, the misgiving-reddened sun
Is incompletely set, for everything
Is liminal: that is, with the unsought,
Preposterous exception of the one
Sincere distinction sharp enough to kill.
My lover. She was here. And now she’s not.