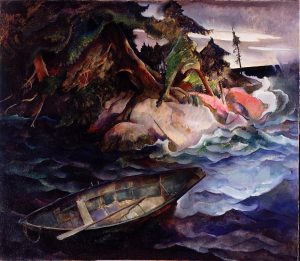 A Poet on an Island

What should be of the poet washed on an alien Isle?
When he is isolated in a society of the self,
Would all torment dissolve as fresh water?
From a stream which flows into the sea.

The system of government is an autocracy,
A tyranny and simultaneous pantisocracy,
A mass of contradictions,
Here corruption from the unconscious comes,
From the primary source of Satan,
Its rise and fall the negation of pleasure in the death drive.

Being awash on an Isle alone,
Creates a reluctant revolutionary of circumstance,
Awake from the trembling, cold sweat of history,
Severed from culture and covenant,
Where the present is a bridge between history and eternity.

Within a radical asceticism of solitude,
Is the renunciation not of world, but world as known,
To reconstruct the storm-struck bivouac
Within the vision of an ideal,
The motive for revolution is not to restart history
But to end time.

What should be the fate of the poet in paradise?
Alone without the underworld of the other,
What shall be of the blaze in the heart
Sublimated in the will to compose,
Will it be as an inferno at night by falling stars?
Reduced to embers flush as the faces of lovers,
With drifts of ash like bodies decomposed of fire,
And the acrid breath of burnt logs aspiring skyward
In the materialisation of the cacophonous dawn.

Here is the dominion of any and all,
Disparity’s an anathema in a world of one,
Being both the Lord and peasant,
The oppressive structure comes from the inside,
Any upending of political dissatisfaction
Is a covert form of suicide.

The poet stands at the shoreline
longing for his persecutor
within the ocean gates of paradise,
To transform this peaceful solitude
To the discordance of a multiverse,
With world and vision of world
Seen in an infinity of differences.
A consolation to a life of conflict
Is the pen dipped in the dusk-dark ink,

Shall poems be derived from disparities in property?
Shall blank verse be written in veiled critique of idiot kings?
Who will inscribe sonnets of lost love?
Or the epics of evil that seeps as heavy rain
Through the shoddy thatch of the body politic?

All of this unneeded in the hermitage of leaf and branch,
The best that can be hoped for is to wait for a passing ship,
To transport him back to civilisation and culture,
Or else beat his pen into a fishing hook,
And compose lamentations of isolation,
Or a hymnal to God in the heart,
That should echo through the night air of the soul
As crashing waves of the restless sea,
As the lord listens to every inflection of this silent chant.

Man once revered eternal, unwavering, cold truth,
From a faith that many thinkers deemed to be uncouth,
Believing instead in things that could be seen and proved.

Godless man most joyful, and ne’er at savage war,
In a new social order upending natural law,
A place of peace and plenty, no barbarous at the door.

How could all this be, with our darkened past?
Where shots ring out at peacetime, and in war the canons blast,
All good things are finite, e’en undying love won’t last.

We’ve all been glibly told, that our nature is a farce,
A thing that’s best discerned, as through a darkened glass,
We’re naught else but a reflection of our social class.

How all this came to be, I could always amuse myself,
With the answer of the creator put upon the shelf,
And run and tell your neighbour that the world’s conceived itself?

Man found himself upset in the denial of his conscience,
Though this was to be a void filled with other nonsense,
All the mystery of our days, contained within the unconscious.

All this was a new way of thinking, a bold supposition,
Unverified a priori, belief in naturalism,
No world beyond the self, all is solipsism.

How sufficient is this thought? I admit I have my doubts,
Every passing year, a newfound fad they spout,
A novel way of seeing, of what life’s all about.

Calling man another mammal, out of an ape he grew,
Do the self-anointed men of science, believe in what they spew?
Avowed sceptics of old wisdom, with blind faith in the new.