Václav Havel’s ‘The Power of the Powerless’ 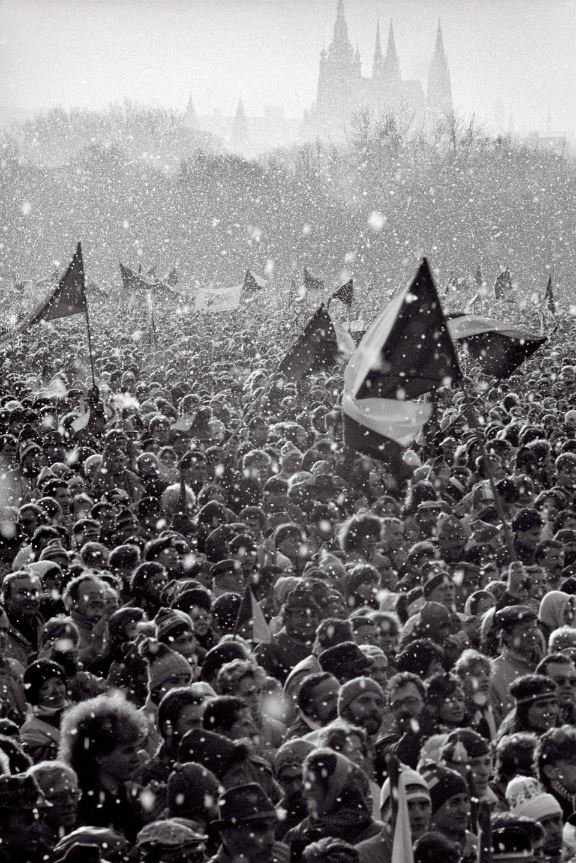 Ideology is a specious way of relating to the world. It offers human beings the illusion of an identity, of dignity, and of morality while making it easier for them to part with them. As the repository of something ‘supra-personal’ and objective, it enables people to deceive their conscience and conceal their true position and their inglorious modus vivendi, both from the world and from themselves. —Václav Havel, The Power of the Powerless

The Czech writer and philosopher, Václav Havel (1936-2011), is best known as President of Czechoslovakia and the Czech Republic after the fall of the Iron Curtain.

Before being elected president, Havel was a key figure in the Velvet Revolution that was instrumental in bringing down communism in Czechoslovakia. He was a major player in the movement known as Charter 77, a dissident group that formed spontaneously to protest the communist regime’s imprisonment of members of a rock group known as Plastic People of the Universe.

Charter 77 grew, eventually becoming an initiative that openly criticized the communist authorities. Havel was imprisoned from May 1979 to March 1983 for being a member of the Committee for the Defense of the Unjustly Prosecuted. His 1983 book Letters to Olga is composed of letters he wrote to his wife from prison.

Havel’s books include Hry, Disturbing the Peace, Antikódy, Summer Meditations, Politics and Conscience, The Art of the Impossible, To the Castle and Back, and Living in Truth.

Living in Truth is one of the central themes that he developed in what is perhaps his most importance work, The Power of the Powerless, which was published in 1979. In addition, Havel has published many plays.

The Power of the Powerless

The Power of the Powerless is an intriguing book in several ways. The book puts on display Václav Havel as public intellectual. The Power of the Powerless is a work that addresses the metaphysics of political philosophy. However, ‘political philosophy’ should not be taken to mean the sophomoric academic theories one encounters in universities. There is nothing theoretical in Havel’s depiction of the brutality of real-world communism.

Public intellectuals prove their acumen while living in communist nations, and in the case of those who are exiled after having lived under communist regimes, defend the plight of liberty of people subjugated by this savage ideology.

Whether living under communism or in exile, public intellectuals who bring to light the atrocities committed by communism are vilified as persona non grata by the leftist intellectual establishment.

The Power of the Powerless belongs to an expansive body of literature of life under communist regimes. There is an extensive list of novels that depict life under communism. Some of these are: Solzhenitsyn’s Gulag Archipelago and the Life of Ivan Denisovich, Arthur Koestler’s Darkness at Noon, and the Cuban writer, Reinaldo Arenas’ Before Night Falls.

Perhaps most importantly, the nonfiction books written by thinkers living in communist regimes and in exile serve as an enlightening and bone-chilling education to undo the indoctrination that high school and university graduates are subjected to in Western nations. If only Western high school teachers and university professors would present students with the truth about communism and socialism; there are many insightful resources available to help rehabilitate the wounded psyche of Western students. Two of these are The Black Book of Communism, published by Harvard University Press in 1999 and the Annals of Communism series published by Yale University.

What does dissent mean for people who live under communist dictatorship? The Power of the Powerless exposes communism in Czechoslovakia by highlighting three key ideas that Havel establishes in the book: Living in truth, life versus totalitarianism, and parallel structures. 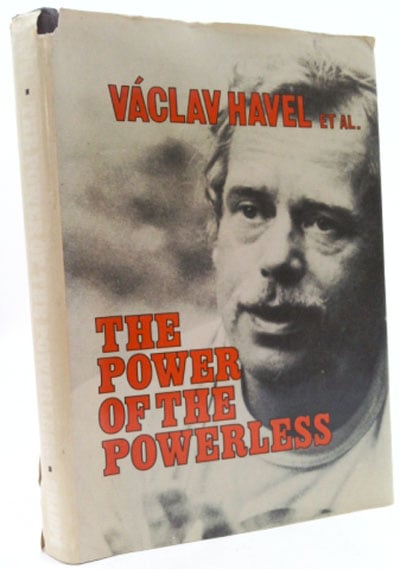 The idea of ‘living in truth’ is self-explanatory: if man is to embrace reality in good faith, people must live their life grounded in aspects of human reality that are verifiable, why is living in truth such a central concept in The Power of the Powerless?  Because Havel alerts the reader to the reality that communism is an intellectualized justification of envy and resentment, both which are primal emotions.

Communism is a social construct that sterilizes man’s pre-political preoccupations—mainly life itself—and organizes human experience through a political lens that leaves no aspect of human reality untainted by radical ideology.

Havel’s expression—living in truth—equates to what existentialist thinkers mean by authenticity and inauthenticity. Authenticity is the stoic idea that man’s values and choices must embrace the road less travelled. Authenticity shuns life as political.

In communist countries, state-sponsored politics is an all-engulfing inauthentic form of existence that man is coerced to embrace … or else. This makes human existence cheap and trivial through the corrosive force of artificial forms of life—Marxist ideology being the vilest offender. Havel’s living in truth is an insightful condemnation of communism and socialism.

Havel exposes the forced normalization of communism’s inauthenticity, that is, being forced to live a lie under dictatorship. He connects living a life of truth with the exercise of free will: “Freedom is not doing the things that you are inclined to do. It is reflecting upon what you ought to do, as your unrepeatable self, and just occasionally taking a risk and doing that thing.”

Unlike in Western democracies, where people are protected by the law, there is nothing gratuitous in taking risks for people in communist regimes, where torture, long prison terms and life are at stake. Havel ties risk-taking as a form of living in truth to life as authenticity.

Another crucial aspect of living in truth under communist regimes is the safeguarding of people’s state of mental and emotional health from psychological warfare. This is important, given that communist regimes are ruled by sadistic, psycho and sociopaths; people who crave the domination of others. What does life under the control of violently compulsive sociopaths mean for the emotional wellbeing of people who want to be left alone to live life in truth?

Communism sells unsuspecting people the idea that the center of life and the structure of communist power are one and the same. This, Havel argues, explains some of the appeal that communism has for feckless leftist intellectuals. This is why Havel makes life (human existence) an existential, not a political, category in The Power of the Powerless.

Being pre-political, life eschews all forms of inauthenticity that attempt to turn it against itself. Communist ideology promotes itself as the guardian of harmony between man and the cosmos. This is the root of the destruction of independent thought, which communism bills as the ultimate form of liberation from the burden of free will. While this is living life as a lie, it serves as the attraction that communism sells to people who accept the normalization of oppression as freedom.

Life is gradually removed as the center of attention under communist rule. In its place, the structure of power becomes the dominant force, albeit the anti-vital animus that turns reality into appearance.

Communism survives on a cycle of delusion and disinformation that, like a chameleon, must change its color to take advantage of the changing environment. This is the ever-becoming modus operandi mechanism of propping appearances to the forefront of life that, not only communism, but leftism sells to the downtrodden and people who stand to benefit from totalitarianism.

In communist and socialist regimes power takes its orders from ideology, life is excluded. This is so because communism is anti-life. The stronger the mechanism of theoretical Marxism grows in stature, the greater the control that it has over a subject people: “Reality does not shape theory, but rather the reverse. Thus power gradually draws closer to ideology than it does to reality …”

The Role of Parallel Structures in Communist Regimes

Havel credits the Catholic intellectual, Václav Benda (1946-1999), with the idea of parallel structures and culture in communist regimes. Parallel structures are effective cultural creations that inspire meaning in their ability to side-step official communist mandates, and shun government-sanctioned interpretation of reality.

Parallel structures include parallel economics, religious beliefs as opposed to government mandated atheism, music, art, and ultimately, a parallel conception of human reality that grounds existence in verifiable aspects of reality. In essence, the creation of a parallel polis enables people in communist regimes to live dignified lives that only answer to life as truth.

A word of caution to the Penguin Random House, UK, 2018 Edition of The Power of the Powerless:

Lamentably, the writer of the introduction fails to capture the life-or-death gravitas of life under a communist dictator, where human dignity is offered no alternatives to flourish.

The writer uses the introduction to The Power of the Powerless to promote leftist woke propaganda. He compares Havel’s depiction of communist oppression to the alleged exploitation of millionaire professional football players who kneel down during the playing of the American national anthem, and protest “against racism and the mass incarceration of African Americans.” The writer then jumps into a backdoor attack of then President, Donald Trump. This commentary misconstrues the value of The Power of the Powerless as a depiction of communist oppression.

The introductory essay in the Penguin Random House edition of The Power of the Powerless is reprehensible and unbecoming of a writer that has been entrusted with writing an introduction to Václav Havel’s exposition of life under a barbaric communist regime.

Luckily, today there are several editions of The Power of the Powerless available in the free market of ideas.