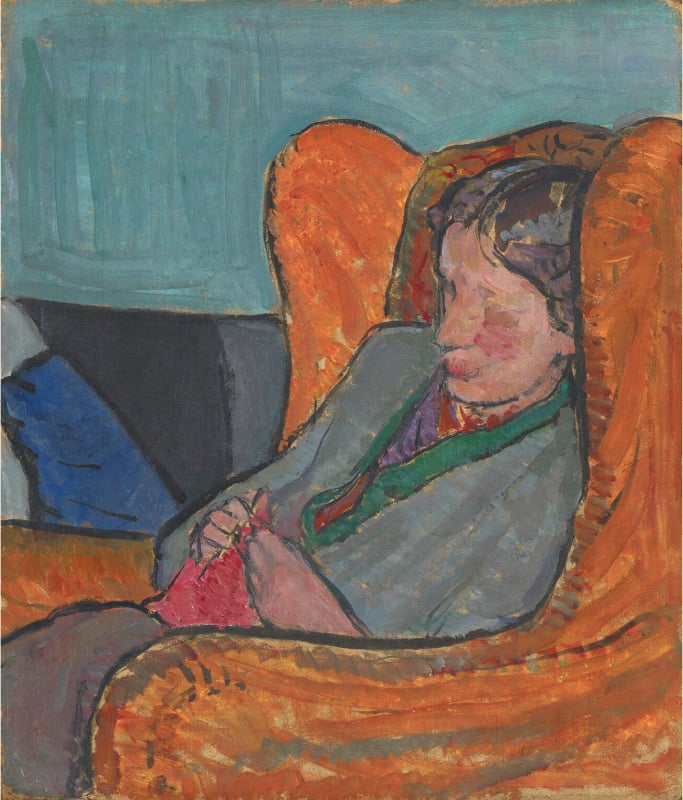 Virginia Woolf‘s sister Vanessa Bell, nee Stephen, a painter, occasionally danced topless at Bloomsbury parties. At one occasion, she had fornicated with Maynard Keynes coram publico—yet she was also mother to three children of her own. By contrast, Virginia not only remained childless but, according to her husband Leonard, was frigid. This was due to sexual abuse in her early childhood by her much older half-brother George Duckworth. Virginia‘s observation of the time, according to Quentin Bell, “that human nature had changed in or about December 1910” might well refer to her sister’s decadent performance, says Cynthia Ozick (in Art & Ardor, p. 40), adding that “no marriage could survive Vanessa for long.” Virginia’s biographer, Quentin Bell, who also happened to be her nephew, son of Vanessa, in retrospect hinted that Virginia might have been lesbian—which seems to be an interesting case of para-experiential reasoning. For it suggests that sexual choices are merely determined cognitively by the outer self as opposed to real-life experiences well considered by its inner sibling, the moral self. Nonetheless, it has been often claimed that homosexual orientation may emerge from excruciating heterosexual encounters as the proverbial lesser evil. Ozick, however, rejects increasingly fashionable but unsubstantiated allegations of gender transition in the case of Virginia Woolf who was well known to have often mocked Sapphists like Vita Sackville-West not least for neglecting her children. Vita “was splendid but her intelligence did not match Virginia’s and her poetry was ‘not reflective’ but rather written ‘with pen of brass.’” Yet apart from that “friendship is never untinged with amorosity . . .”

Read more in New English Review:
• Traversing the Landscape of Transgender Politics, Pt.2
• Now is Not the Time
• Hypocrites and Heroes

The story of Virginia and Vanessa touches on an archaic issue known as sibling rivalry. It plays a crucial role in biblical scripture, namely in the narrative on the Patriarchs or what Christians call the Old Testament. The rivalry between Cain and Abel, Ishmael and Isaac, or Joseph and his brothers come to mind. Biblical siblings’ rivalry is at the center of polygamous shame-and-revenge culture of the patriarchs and provides ample evidence that monotheism was incomplete without monogamy. It is for this reason that Moses revelation of guilt culture at Sinai changed everything. It culminated in the synthesis of monogamy and monotheism, which would mitigate sibling rivalry by the covenantal family. 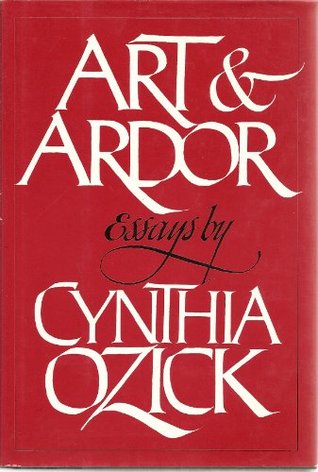 This brings us right into the center of Ozick’s presentation of sibling rivalry in post-Victorian England. With regards to family feelings, Cynthia records Virginia‘s “unslakable maternal envy . . . of the childless for the fruitful” with a reference towards her sister Vanessa who gave birth to three children. At the same time Virginia found her sisters parenting “obsessive and excessive” and felt after visits with Vanessa‘s little sons “a suffering documented again and again in her diary”. Ozick’s novel treats envy and jealousy superficially, however.

In my view—based in Hebrew Scripture—envy is extroverted, related to property with an emphasis on non-animated things and is managed by the outer self and its centrifugal or outgoing human vision. By contrast, jealousy is introverted and traditionally considered centripetal meaning: reserved for the family; hence it is closer to the sense of hearing and voice connected to the inner self. Now, how do we understand the biblical account “Naso” in the Torah and its story about meals prepared by women to assuage male envy? It shows how clever wives handle the male distractions by refocusing the appetites from outgoing attention to inward pleasures. The opposite has been attempted by Sigmund Freud and his controversial invention of female “penis envy” which confuses the inner and outer perspective or means and ends—a repetitious feature of Freud’s (according to Wittgenstein).

While a household term in the 1960s, today “penis envy” has been displaced by the male fashion toward effeminate transitioning. Penile envy simply confirmed a truly appalling gender bias within Freudian psychoanalysis imitating the millennial Christian gender bias toward males. After all it was Jesus Christ who distorted the pre-established harmony of Jewish gender equality flourishing in the biblical narrative of Genesis. Therefore we may forgive Virginia Woolf for in the course of her deepening neurosis revealed her Christian confusion of outward envy with inward jealousy. Cynthia Ozick spotted this early on. Like other post-WW II intellectuals of the New York literary circles—as for instance Norman Podhoretz in his autobiographical “Making it” —Ozick chose to distance herself from their Bloomsbury peers in London.

While at Columbia University, Podhoretz in his outstanding performance became the subject of envy by his peers who called him a grade grabber and teacher’s pet. Podhoretz, raised as he was in a close-knit family of Jewish immigrants, was not prepared for this exposure to raw envy that emerged in a liberal culture where the demarcation between peers and family was beginning to fade away. Which brings us back to Virginia’s family and her nascent madness which would eventually drive her to suicide. Virginia struggled with her Christian sensibilities much more than her sister Vanessa, a matter that concerned Ozick in her essay as a means to protect Virginia’s heterosexuality and family credentials in a very peculiar way, namely by stressing the “uxuriousness” (“uxor” is Latin for husband) of Virginia’s Jewish husband. Leonard Woolf was a husband of rare devotion who stood out for his marital loyalty resisting the “hypersexual tide” pouring in from chaotic Weimar Germany. He particularly kept the sanity of not insisting on sexual marital obligations upon his spouse. Instead, he went for lovingkindness and seemingly limitless patience toward Virginia’s madness which he astutely took as the means for nursing her extraordinary literary talent.

Meanwhile her biographer Quentin Bell seemed very keen to dwell on Virginia‘s same-sex inclinations and by that in a way alienating her from her creative self. Cynthia Ozick by contrast stresses Virginia’s inward orientation and conjugal fidelity which allowed her literary genius to flourish not despite but because of her neurosis. On this view Cynthia might have better explained her use of the word “competitive envy” instead of “sisterly jealousy” as it has conventionally been understood. As explained above jealousy was an achievement of monotheism and figured as refined envy within the religious context of guilt culture which is based on the inward perspective of love in the family. While inward jealousy can therefore be assuaged by human love, outwardly directed envy cannot. After all it attaches itself to non-animated things which do not respond to human affection.

The biblical distinction between jealousy and envy seems to be irreplaceable for maintaining the ontological difference of guilt culture between the inner and outer self that pagan and polytheist shame cultures are incapable of conveying. It emerges from the Jewish ban on images and allows to distinguish between animated and non-animated beings: refined envy becomes jealousy and is reserved for our loved ones—as opposed to raw universal envy. While jealousy denotes inward loyalty to family it makes us more resilient toward outward rivalry; guarded attitudes of jealousy are feelings protected by love in the sense of internalized or civilized envy.

Cynthia Ozick’s outstanding literary sensibilities emerge from her reservations against those who all too easily succumb to biology and enables the reader to fully appreciate the genius of Virginia Woolf. Concerning the argument of gender alienation or dysphoria, advanced by Quentin Bell, inevitably detracts from Virginia‘s brilliant performance and strong character. Ozick dwells unduly on what she calls Virginia‘s “Vanessa envy” which can be better explained as a symptom of her madness. Sisterly jealousy is the more fitting term which could be converted into love of the arts thanks to her husband Leonard‘s Jewish family skills which were probably only second to his nursing skills, including milk at eleven in the morning and certain healthy topics of conversation in the evening.

Vanessa’s thriving as Madonna-cum-Bohemian, raising three children as well as participating in “free love” seems to be of crucial importance. For Virginia could only maintain the sisterly bond of love and master the full burden of her closeness to Vanessa by working out the moral implication of her sister’s escapism. She had to translate family jealousy into professional performance. It affected her whole person negatively and inwardly and, at the same time, sustained her poetic imagination. It is therefore easy to understand why the pathology took hold in her personality rather than in Vanessa‘s, whose lifestyle merited emotional distress of sorts.

To sum it up: Virginia‘s extreme empathy for her “outwardly mad sister” indulging in countless extravagancies eventually carried her away into her own inward madness, which was subsequently driving her literary genius. While Vanessa seemed at ease in handling her contradictory lifestyles, Virginia lived through them on a far deeper plane—in terms of tradition, after thought, and remembrance. So, while Virginia’s jealousy was constantly drawing her inward, if only by being a centripetal force, it elicited her literary genius. By contrast envy alone is centrifugal and dispels any intensive feelings into the visible and outward world.

Ozick’s book title Art & Ardor refers to a phrase which is also close to an “addictive envy,” for it takes art as an almost abortive family business. This suggests Ozick’s, like Virginia’s, sensibility being close to the Protestant way of life marked by gradual abandonment of jealousy and its transformation into “always guarded envy”. In furthering this Protestant tradition, the sexual revolution of the post WW II-era witnessed the purge of all jealousy by denouncing it as bourgeois. If anything, this regression is ample proof of the Western descent from monotheist guilt into pagan shame culture evidenced by the generalization of envy. During the 1960s the consumer economy fostered even more the plunge into the world of things obliterating jealousy altogether. To be sure Ozick’s title captures the Zeitgeist with the line “Art & Ardor,” because “ardor” is now associated with “love of art,” eclipsing the inner perspective of the family. Ardor, therefore, may be taken as de-sublimated jealousy and a source of talent but it can only be sustained within the frame of the family. If jealousy vanishes, the arts will follow suit, for envy will rarely create anything of value.

Friedrich Hansen is a physician and writer. He has researched Islamic Enlightenment in Jerusalem and has networked on behalf of the Maimonides Prize. Previous journalistic and academic historical work in Germany, Britain and Australia. He is currently working in Germany and Australia.

PrevNot Always Man’s Best Friend
Now is Not the TimeNext