Walking in Manhattan and Böcklin’s Isle of the Dead 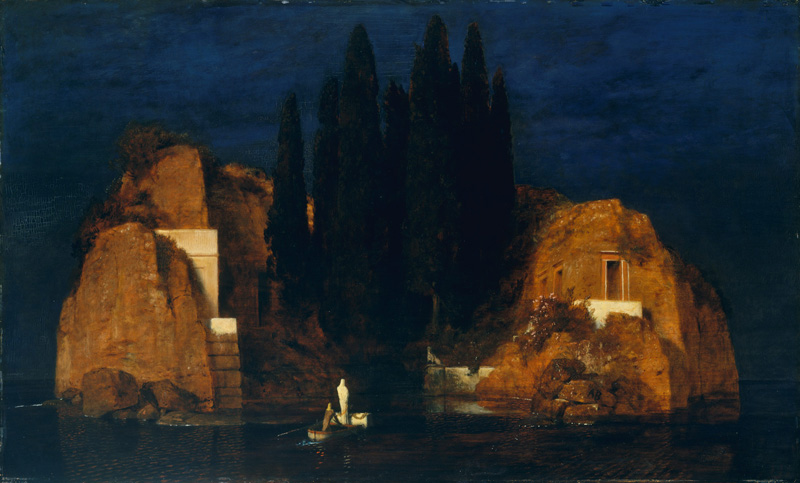 The steps of the Metropolitan Museum of Art are filled with people sitting. Some are eating, others conversing, and some are just taking in the sights and sounds of New York City in early Autumn.

It is a cool October day. The sky is umbrella blue; the air foreshadowing colder days not far ahead.

People move differently in the city than they do in a rural setting. While a severe storm or the sun beating down on a farmer’s brow in the country becomes something to ponder—or work around—the city can shield us from such things. The illusion of protection in urban agglomeration and large structures is a dominant component of human psychology.

Watching the faces in the crowd, I imagine Gilgamesh, agitated, walking through Uruk and conversing with the town elders, the young man asking questions about immortality; he knows that time is ethereal, fleeting, like a summer cloud.

Read more in New English Review:
• Autonomy and the Justifiability of Paternalism
• Brad Pitt’s Oscar and the Risks of Masculinity
• Unnecessary Journeys

A walk through the Agora in ancient Athens would deliver a reflective person right into the Q&A snare of the perpetually animated Socrates —the “wisest man in Athens,” they called him.

We can only imagine what qualities Jesus perceived of the human condition, of man’s being, when he peered into crowds. A well-situated bench in the middle of a city is often all the schooling one needs to navigate through the world of incarnated souls.

People who over-intellectualize the human condition transform the latter into a caricature of itself.

Security. Man cannot flourish without security, much less attain contentment. Moral and existential security are the dual pillars of contentment and stability.

Existential forms of security lead to lived-convictions, life-affirming values and self-rule. The alternatives are debilitating cynicism, and skepticism.

What would beings from another world think about our creations, our existential longings, ambitions, and inquietude, or the lack thereof?

The beauty of the city can kindle awe and wonder for some people; the majesty of a building, its elegant proportions reaching skyward to infinity, the strained logistics of human population centers.

Yet what we witness before us and what we are able to see remain two different things.

To witness something, we only have to be immersed in its presence: a fireworks display, a bird busy building a nest, a child learning to hit a baseball. Most people experience the world sensually.

To witness is merely to live on the surface of the world, to take the apple for its skin. Animals do this. This is all they have. As essential as this is for our well-being and survival, to witness the world is only a portion of human experience. Perception and observation are the mother of conception, but not for everyone. Many people think of the human condition as merely a bastard.

Instead, it is seeing that makes us persons. We marvel at the instinct and dedication to detail of birds building a temporary home. This same existential attention to detail often leads to reflection on our own being.

Some people take mystical pleasure from the passage of time; the mystery of being. This is what it means to see, for seeing is the reflective camera-eye that structures meaning and purpose in human existence.

Seeing enables us to take nothing for granted: the symmetry of creation, the unique body sculpting of automobiles from long ago, and qualitative essences that jump at us only when we are receptive to them.

Seeing honors the order and hierarchy of being, for seeing is an essential part of moral and spiritual nobility, the stuff that safeguards the freshness of spirit and humility.

A culture that is blind to the hierarchy of essences merely appeases people who refuse to see, but who demand to own the heightened awareness of those who can. The latter is the most pressing concern for man in the twenty-first century.

I watch people walk by and think of Shakespeare’s “a rose by any other name would smell as sweet.” Looking up at the infinite sky, I know that blue has always been blue, no matter the violent overreach of fashionable theories and the whim of the naysayers of morality. The only changes in human history are the faces in the crowd.

Inside the Met, the visitors disperse into different galleries. What a while ago looked like a human herd in repose is broken up into small clans, individual faces that pass each other, only now exuding greater anonymity.

Museums and art galleries are laboratories of the human imagination, for visitors must rely on it if they are to see and not merely witness the works before them.

Böcklin’s Isle of the Dead

In gallery 292, I come upon the Swiss painter, Arnold Böcklin’s (1827-1901), Isle of the Dead. As a young man in the 1970s, I was mesmerized by this painting. This iconic work was one of the most popular paintings in Europe in the early part of the twentieth century. It was reproduced and hung in homes and public buildings.

Böcklin created five different versions of the painting. The “New York” painting is the second of these, and my favorite.

Isle of the Dead (Die Toteninsel) depicts a rocky island, the final resting place for people who are buried there. The painting captures the imagination for several reasons—the mystery of the unknown is one of these.

A rowboat is transporting a coffin draped in a white cloth. A tall figure, also draped in white, stands at the bow of the boat, presumably about to bid farewell to the dead person. At the stern, a rower propels the boat to the mysterious rock-island.

Part of the mystery of the painting—this is especially true of the New York version—which depicts the darkest night, is the vacuum-like, all-engulfing quality of that mystery-inducing canvas. The island is surrounded by blackness, where the dark water meets the slightly brighter night sky. The island itself is redolent of a tomb shrouded in darkness.

The island is clearly a cemetery of sorts, albeit a very special place for select dead. From the natural rock, niches have been carved to house the dead. In the middle of the painting tall cypress trees are clustered. Cypress trees are symbols of cemeteries and mourning. This dispels some of the mystery of this marvelous, 29 x 48-inch Oil on wood creation of the imagination.

This matter of fact description of the painting is what lies before the museum visitor. These are objective qualities of the Isle of the Dead that anyone can tap into. This is what we witness when we stand before the painting – any work of art. Yet objective human experience is often ameliorated, not by witnessing more, but by seeing through, the latter is the heroic act that grounds us in our being.

To attempt to decipher the purpose of the painting, its historical provenance and the variations of the different versions of the work only traps us in the grasp of pedantry and scholarship. The appropriate response to a painting such as this is existential engagement with oneself.

Read more in New English Review:
• Wokestan
• A Pair of Literary Judgments
• The Dark Side of TV

The subject of the painting is death. This is another source of the mystery of Isle of the Dead. Looking at the painting, one reflects about the dual poles of death that the painting presents: the dead person and the loved one. This is evident by the solemn figure wearing white who stands next to the coffin.

Böcklin referred to the Isle of the Dead as a “dream picture: it must produce such a stillness that one would be awed by a knock on the door.”

In the stillness of contemplation, a knock on the door seems like a savage intrusion that returns us to the mundane and keeps us from seeing.