What is a Woman, Anyhow? 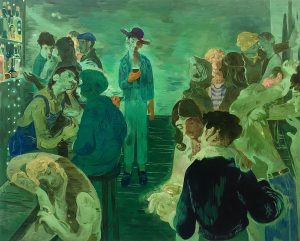 The answer, according to various dictionaries (and to this writer) is: ‘an adult human female.’ Alright then, you ask, what is a female?

Answer #2: (according to the trans-rights movement): anyone who ‘identifies’ as female. Okay then, what does it mean to ‘identify’ as female? As nearly as I can tell, it means to make the claim that one is female when one’s chromosomes, gametes and anatomy say otherwise. That claim may be explicit, as by assuming a female name and insisting that others use feminine pronouns when referring to oneself, or by insisting on being allowed to participate in women’s athletics, use women’s public restrooms, be housed in a women’s prison, etc., or it may be implicit, as by one’s dress and deportment. Or it may be both. But whatever form this ‘identifying as female’ takes, it is something objective which others can observe. Which is to say, it is fundamentally performative.

I am told that ‘trans-women’ (i.e. those with an ‘X’ and a ‘Y’ chromosome and male anatomy who identify as female) do so because they feel themselves to be female. (And, likewise, mutatis mutandis, as to ‘trans-men.’) But what does it mean to ‘feel’ female? If I am asked ‘Do you feel male?’, the truth is that I would not know what to say. I feel the way I feel, which is to say, I have—as we all do—a certain seemingly irreducible sense of ‘being me’. Beyond that, I can’t say what it feels like to be me. It feels like … this!

But the point is that my being male isn’t a matter of how I feel. It is a matter of what I am. I just am male by reason of my genetic and anatomical characteristics. My broad point here is that reality (and yes, Virginia, there is such a thing) is not answerable to our feelings. My being male is no more a matter of what I feel than is my height or eye color. Insofar as gender is concerned, feelings, quite simply, do not matter.

There is, of course, a distinction between ‘female’ and ‘feminine’ and between ‘male’ and ‘masculine’. The latter in each pair is doubtless a largely cultural construct. There are ‘masculine’ women and ‘feminine’ men. The differences in deportment between the masculine and feminine—which lie along a broad continuum and include such traits as speech style, dress, and the like—are not, to put it in philosophical lingo, ‘natural kinds.’ That is to say, they do not reflect any relevant aspect of the world, but rather are reflections of the interests and judgments of those making the classification, whereas the categories of ‘male’ and ‘female’ are most certainly natural kinds.

Beyond all of the above, there is a fundamental contradiction at the heart of the trans movement. The trans person claims that s/he is a woman trapped in a man’s body, or vice versa. That is, s/he is ‘really’ a woman (or man, as the case may be.) At the same time, the movement dogmatically asserts that gender is merely a ‘social construct’. But what exactly is a ‘construct’?

Some typical dictionary definitions are: ‘an idea or theory containing various conceptual elements, typically one considered to be subjective and not based on empirical evidence’; ‘a theoretical entity’;’ a product of ideology, history, or social circumstances.’ Well, you can’t have it both ways. If gender is a merely social construct, then there can be no such thing as one’s ‘real’ gender, no such thing as being ‘really’ a man or a woman. And in that case, the claim to being ‘really’ a man or woman when that claim is contrary to the reality of one’s biological constitution, is nonsensical and amounts to little more than a pose. One simply cannot be trapped in a social construct.

I understand full well that there are those who feel a deep disconnect or mismatch between their biological sex and their sense of sexual identity. There are men who very much want to be women and women who very much want to be men and who deport themselves as their desired gender. I understand as well that these individuals suffer profoundly from the conflict they feel between what they are and what they want to be or imagine themselves to be. The condition is known as gender dysphoria. It is correctly recognized as a mental disorder and, like all those afflicted with mental disorders, such people deserve to be treated with compassion and respect and to receive appropriate professional care. But they do not have a right to insist that the rest of us affirm them in their delusion that they are of the other gender.

That it should be necessary to point any of this out is testament to the bizarre hold that the trans movement has assumed over vast swaths of contemporary western society, including over masses of seemingly intelligent people, many with prestigious academic credentials.

One such person, now a newly appointed Justice of the United States Supreme Court, was flummoxed upon being asked ‘What is a woman?’ Ketanji Brown Jackson begged off, unable to answer (she claimed) because, as she so memorably put it: “I am not a biologist.” Ironically, Justice Jackson’s appointment to the Court has been hailed as a landmark because she is the first black woman to be named to that high office. But wait! How do we know that she is a woman? As far as I am aware, neither the President, prior to appointing her, nor the Senators on the Judiciary Committee, when questioning her, bothered to ask her if she is, in fact, a woman. Can it be that the President and the entire Senate Democrat leadership merely assumed her gender? Egad! What a bunch of cis-normative transphobes!

Peter Lopatin was born and raised in New York where he earned his JD degree and practiced corporate law for thirty years. Along the way, he studied philosophy as a graduate student at the New School for Social Research. After retiring from his legal practice, he obtained a Certificate from the New School in teaching English as a Second Language and has been an ESL teacher since then. He has taught at the University of Connecticut/Stamford, Norwalk Community College, Manhattanville College and, most recently, at the Stamford English Language Academy. Peter’s short stories and book reviews have appeared in Commentary, The Weekly Standard, The New Atlantis, and New English Review. His poetry has appeared in New Millennium Writings and Poetry East.