Written on the Wall 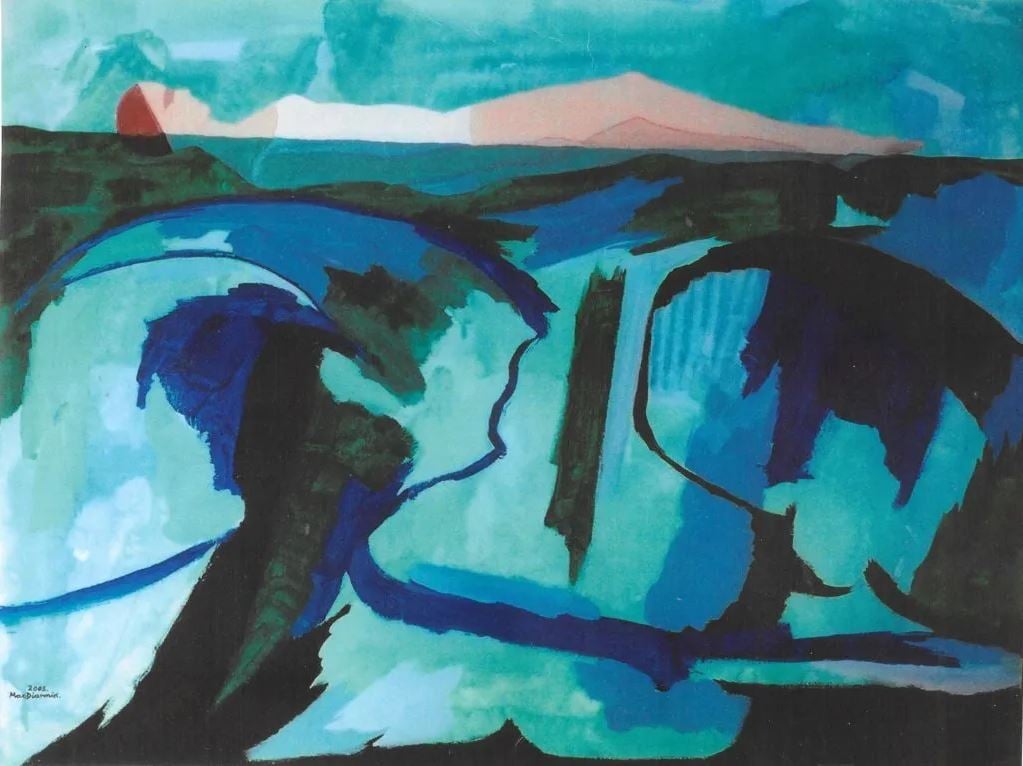 The Origin of Life, Douglas MacDiarmid, 2005

It was no use calling out to ask who was there, although it was obvious that someone was inside. A young woman came to the door. “Don’t I know you?” she asked.

“I don’t think so.” The young woman opening the door looked suspiciously.

Charming strangers were guilty until proved innocent. The habit of looking about, with the fear of shadows and echoes, remained at the forefront of her daily life. The next time might be much worse than the first time.

“I thought I saw you the other day. I wasn’t sure if it was you. I thought it may be. You were walking on the shore.”

“That was a long time ago.”

A city can be at the same moment an exciting and a lonely place when they saw on the road a car going at speed the wrong way. Cars going in the other, correct, direction had to swerve to avoid the reckless driver. Somehow a crash was avoided, but there was so much noise of brakes and horns. The fear that they might witness a needless disaster stunned the women into silence. What they were seeing was madness enacted on the city street for the sake of its danger. It was so careless and violent that it seemed to symbolize something within the city, within any big city.

When an ambulance sped by, siren blazing, or when a funeral cortege solemnly processed there were narratives of personal tragedy in the fine weather as the blossom was forming on the trees and the dawn was breaking a little earlier each day. Eager children were looking forward to the summer while someone was staring into the pitiless night of winter.

Yet from time to time something happened to waken a ghost. If love was strong enough there would be a meeting of minds, given time. And they had time for this to happen, whereas the dead girl’s time was over tragically and needles.

The sense of ownership was not a sense of possession as much as freedom. Their conversation didn’t go well always. There was a tension between them as two lives sought out the common ground where respect and affection find fecund soil. They were you, eager lives with ambitions that overrode the complacent wisdom of mature minds. Neither wanted maturity. Both sought out the exciting and the extreme. That could lead to conflict. It often did.

There was water for washing in the stream. Water for drinking must have been brought in barrels. The resourcefulness of these people was remarkable. Their ingenuity, borne of an absolute necessity, was the key to their survival. But their lives were precarious without the comforts of the civilization that they had rejected or that they felt had rejected them.

Someone with an original voice was emerging only to be rejected as worthless by lesser minds, minds that were mindless in their conformity and narrowness. They had sought to crush him, recognizing that his talent was a threat to the complacency of little people, stupid people, the dull and idle hovering like flies over the discarded carcass of forlorn promise.

Was it possible to remain silent? A change of direction, more money and new friends would be the best revenge. Idle minds entertained foolish, half-formed ideas. But in the end those foolish minds were indifferent to their neighbours’ needs. When a problem emerged the shutters came down. It was no concern of anyone. It was better not to interfere.

The sun’s reflection on the water made sea and sky difficult to distinguish. The horizon disappeared into the backdrop of cerise and mauve streaks and while that was the last of sunlight through the wisps of cloud on a clear evening.

At sunset giant shadows are cast. The night movers awaken. Secretive creatures stir the mist and shake the trees. There is always somewhere to half-hide from the fearful predator that thinks itself entitled to the earth. Darkness envelops the enemy. Darkness is a friend to the wild.

Wherever you are in the world there is the world. It may be in a dark back alley of a city. It may be here where there is only the sea. But everywhere is part of it. Good things that happen in bad places. And bad things happen even where it all seems so impossibly perfect. When a body is found washed on the shore you know that you are living in the world.

At times she felt a stranger, someone homeless, wandering and seeking refuge that could never be found. There were lights in the distance but they always vanished when she came closer. There was nobody visible in the forest but there were voices speaking conspiratorially in a language she could not understand. What she could understand was the contemptuous refusal to help. Or else there were the beckoning whispers she could understand, and fear, only too well.

There were signs of tarnished dreams, like the haiku painted on the wall long ago. She could just make out what was written:

Words like the sun rise
enlightening voyagers
from earth to heaven

Who had written that? No need to ask: she knew. And what became of this street poet’s delicate optimism? Had it also faded with the paint on the wall?

There was something engaging and permanent about a poem. What it must be to write one, then another and another. It takes time, of course. And it takes talent. Writing, like painting, comes out of the urge to express oneself, and the discipline to do so.

Perhaps a part of her wanted to revive the love that had been, if only for a moment, although the sensible part of her (which was the great part of her) knew that such an idea was absurd, impossible and disastrous.

“Then one way of living became another.”

There was in her a delicacy, a fragility combined unusually with a determined intellect. She was shy, yet knowing her own mind, and unafraid to speak it. To live another life, to imagine living graciously and in leisure, that was daydreaming. There was no purpose in such idle thoughts.

In the early hours before sunrise came the sound of someone apparently in the act of chanting. It was not song. Nor was it speech. It was as if the writing on the wall was breathing.

The house was not silent at night. Houses never are silent. There is always something happening. The noises almost always can be explained. There are water pipes. There floorboards adjusting themselves. Stairs often need to settle themselves. Clocks make steady, mechanical sounds. The fabric of the houses shifts a little. A house is not still because the ground on which it rests is not still.

Then there are the unexpected sounds for which there is no immediate explanation. At night whispers are carried through the darkness. Voices seem close. There is surely the tread of a foot somewhere near. These things we hear in the night.

As for the birds, the birds saw everything from the vantage. From the sky the world was a map so easily read. Something approaching from the distance, something not yet visible on land, was in their sights.

They saw people wandering, escaping or simply seeking solitude. They saw friends before the friends saw each other. They saw enemies set on vengeance. They saw lovers in secluded places. The birds saw storms on the horizon. They saw children hurrying home. They saw dogs running wild. They saw sailors pitted against the ferocity of the sea. They saw drowning sailors clinging to the rocks until the storm passed. The birds saw everything.

Had she seen anyone? Had she heard anything? Or, perhaps, there really was nobody there. What was written was written long ago.

Geoffrey Heptonstall’s poetry has appeared in many magazines and anthologies throughout the world. His first collection, The Rites of Paradise, received critical acclaim when first published by Cyberwit in 2020. Sappho’s Moon followed. A novel, Heaven’s Invention, was published by Black Wolf in 2016. A number of plays and monologues have been staged, broadcast and/or published. An essayist and reviewer, Geoffrey Heptonstall lives in Cambridge, England.