Asia Bibi: I always believed I would be freed. She is offered a home in France.

The BBC  interviewed her in France yesterday. She also met President Macron and has been invited to live in France.

Asia Bibi, the Pakistani Christian woman who spent years on death row after being convicted of blasphemy, says she always believed she would be freed. Now living in Canada, she told the BBC that she hoped she would be able to return to Pakistan one day.

Ms Bibi spoke to the BBC during a visit to France where she is promoting her new book. Ms Bibi has released a memoir, Enfin Libre! (Finally Free), written with French journalist Anne-Isabelle Tollet. 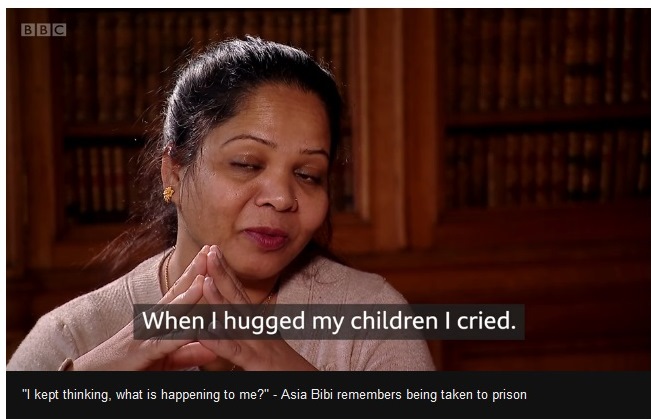 In it, she recounts her time in jail and her brutal treatment by guards. In one of the most disturbing incidents she recounts how she had her neck put in a brace that was tightened with a key, and was pulled about on a chain by guards.

“I can’t breathe,” she writes. “My neck is compressed by a neck brace that the guard can tighten as much as he wants with a big key. A long chain drags on the dirty floor; it links my throat to the guard’s handcuffs that drags me like a dog.”

Pakistani authorities have dismissed the allegations, saying her claims of torture were “not plausible”.

Ms Bibi told the BBC that her Christian faith helped her through the ordeal.

“They said change your faith, and you’ll be freed. But I said no. I will live my sentence. With my faith,” she said. “I found out from my husband that the whole world was praying for me. And that even the Pope had prayed for me. That made me happy. And I found out the whole world was praying for my misery to end. That made me feel that their prayers would definitely free me.” Praise be.

Ms Bibi called on Pakistan’s Prime Minister Imran Khan to free anyone unjustly accused or convicted of blasphemy and to ensure that the charges are investigated properly. Ms Bibi says in her book that the Christian community is despised and bullied and discriminated against.

But Pakistan says it attaches high importance to the protection of rights of minorities, which are guaranteed under its constitution. Pakistani authorities say blasphemy laws exist in many parts of the world and that all such cases in Pakistan are brought before the courts and follow due process.

Enfin Libre! By Asia Bibi is out now in French and other languages, and an English translation of the book will be available in September.

The BBC give rather more room to the Pakistani government to deny her torture than I think that regime merits; they also don’t mention the British government’s refusal to offer her asylum on the grounds that a certain community would be so disturbed that her safety couldn’t be guaranteed.

Asia Bibi said on Friday that she had been invited to live in France, after a meeting with French President Emmanuel Macron.  “I have received the invitation from the president and the French Republic, and I’m honored,” she said. 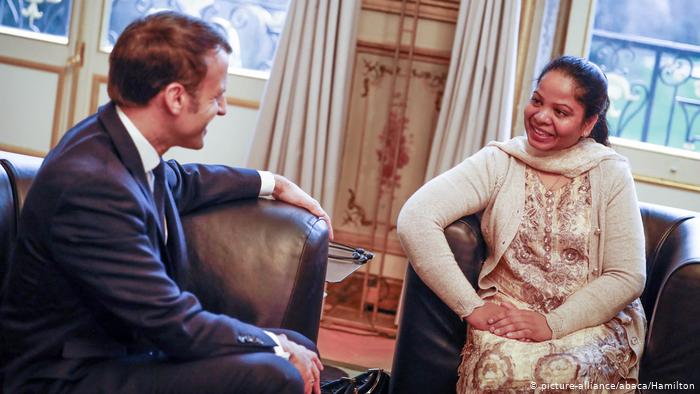