Australia rejects the politics of envy and a green-left redistributive agenda. 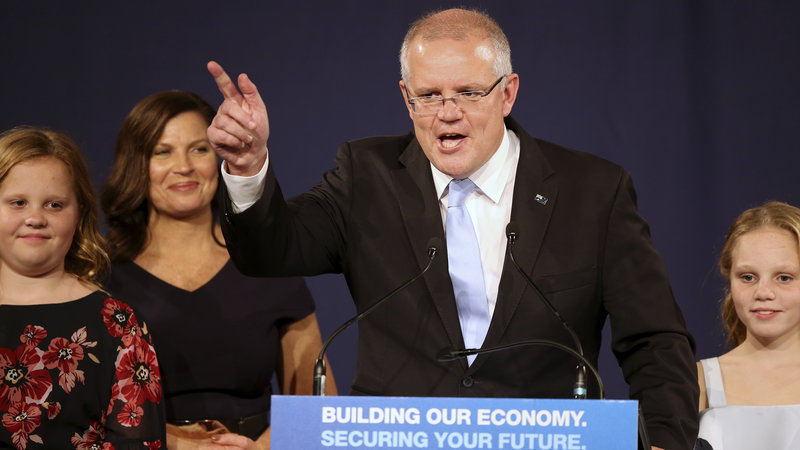 Prime Minister Scott Morrison described the win by his Liberal-National coalition government, against the odds, as “a miracle” and a “great victory” for the “quiet Australians.”

The opposition Australian Labor Party had been widely expected to win the Federal election on 18 May 2019.  The fortnightly Newspoll had been pointing to a Labor win since the last Federal election in 2016. The betting was strongly in favour of a Labor win. So much so that one bookmaker began paying out on Labor before Election Day.

But it was not to be. Morrison’s government has at the time of writing won 75 seats in the 151 seat House of Representatives and is predicted to end up with 77 or perhaps 78. That’s enough for form a majority government and provide the Speaker of the House.

Labor crashed to an expected final seat count of 68. It had been expected by the bookmakers to win some 86 seats. The new House of Representatives is also expected to include 6 independents, some of who are likely to generally support the government. One new independent, Zali Steggall, defeated former Prime Minister Tony Abbott in his blue ribbon Liberal seat of Warringah in Sydney’s north shore with a concerted and grass-roots campaign to “vote Tony out” because he led opposition to gay marriage, undermined his party’s government and once described climate change as “absolute crap.”

There are many in Labor and the green-left commentariat who look to explain this outcome though tactical issues and circumstances of the campaign.  Preference deals with minor parties, a vast yellow advertising campaign by billionaire Clive Palmer, or this or that specific event in the campaign.

But that doesn’t seem to me to get anywhere near the heart of the matter. Labor lost comprehensively, on who they put up to be Prime Minister – Bill Shorten – and on policies.

Australians didn’t warm to Shorten. He was never popular, and couldn’t sell to mainstream Australian’s Labor’s collection of redistributive, tax and climate policies under the “Fair Go for Australia” slogan. Australian’s didn’t trust him. Queenslanders dubbed him ‘Bull Shitten.’

In the end, Shorten became a sneering, anti-aspiration, redistributive class warrior. And an anti-rationalist to boot.

The tax-grab at refunds of company tax paid on dividends to people who don’t pay income tax, usually self-funded retirees with modest incomes, was a disaster for Labor. The baby boomers are still a very large demographic, even if they are no longer the dominant one. They are in or near retirement. Labor’s spin that these refunds were a gift from the government that was legal but an unsustainable cost to the budget rubbed salt into the raw wound of the attack on their incomes.

On climate change, Labor went too hard with its 45 per cent emissions reduction and 50 per cent renewable electricity targets by 2030. It didn’t bother to explain its plan to achieve the targets and what the consequences and costs would be. It was here that its anti-rationalism surfaced most noticeably – it waved away such rationalist questions and sneered at those who asked them, or the quiet Australians who thought them, preferring to ride the wave of affluent enthusiasm for solar panels and climate action as a moral cause.

Former Greens leader Bob Brown leading a convoy of southern city-slickers to the coal regions of central Queensland to tell them to stop the proposed Adani coal mine took the breath away for elite arrogance. No surprises that when they got there, they couldn’t get a hotel room or a meal, let alone a welcome. Is there anyone who still doesn’t realise that Queenslanders hate southerners telling them what to do!

Australians hate being lectured to; hate being told what to do, what to think, by ‘authorities’, whether they are monarchs, priests, elite experts or anyone else. In Australia, we like to think for ourselves; not to be treated as ‘lesser’ by people who think themselves above us.

Labor’s radical secularism also cost it. Labor allowed itself to be seen as anti-Christian. The gay marriage vote of 2017 was supposed to settle the issue of homosexual discrimination under the law in Australia for good – marriage law was the last legal discrimination against homosexuals. But the LBGTQI crowd just keep on bashing people with their anti-normal-people agenda.

Finally, the extreme green-left helped Morrison to victory. I don’t think the ‘quiet Australians’ want an Australia where extreme animal activist vegans terrorise farmers and others going about their business. Where abuse and eggs are hurled by a Greens-sympathising feminist activist at the Prime Minister visiting a Country Women’s Association meeting, as happened during the campaign. Where talented footballers are sacked for tweeting that sinners go to hell. Where their every thought and word can be stigmatised as ‘something-o-phobic’.

In the end, Australians rejected a softly totalitarian socialist agenda of the leftist elites, presented under the banner of ‘fairness’ with a tax grab on property and investment income and big spending aimed at buying off the support of government dependents (welfare recipients, pensioners, public sector workers in health and education and the ‘caring sector’) and a dramatic reshaping of the Australian economy in the name of climate action. The Labor-Green left was judged as attacking the liberal, productive and working people of Australia, with their ’normal’ values.

Morrison was sneered at by the many in the mainstream media for his rather bland comment about keeping the promise of Australia to Australians. The left looked quizzically at each other, like, what the hell does that mean; an empty set of words.

But Morrison’s Australians know exactly what it means. A country where you and your family can live in peace, work hard, keep most of your own money, not be taxed and dictated to at every turn by the government, speak your mind, and acquire through hard work and property investment a standard of living unrivalled by that of all but a handful of other countries.