From the Austrian edition of The Local

Austria’s government announced on Wednesday its intention to bring in a ban on the headscarf for girls in kindergartens and primary schools.

Education Minister Heinz Fassmann said that the draft law would be ready by the summer. He added that it would be a “symbolic” act, regardless of how many children were actually affected. 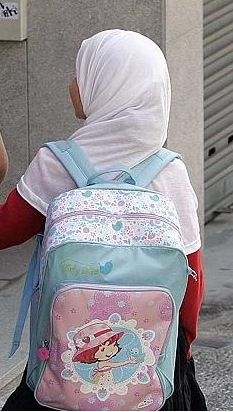 Vice-Chancellor Heinz-Christian Strache of the far-right Freedom Party (FPÖ) had floated the idea of a ban over the weekend, saying that girls “under the age of 10 must be protected” and be able to “integrate and develop freely”.

Chancellor Sebastian Kurz of the centre-right People’s Party (ÖVP) also backed the idea, telling the Oe1 radio station: “We want all girls in Austria to have the same opportunities”, and that he wanted to avoid the development of “parallel societies”.

At a news conference with Vice Chancellor Heinz-Christian Strache of the FPO, Kurz said they believed there was a problem in schools though they produced no figures to support this. “What I can tell you is that it is a growing phenomenon. A few decades ago we did not have this in Austria and now it occurs primarily in Islamic kindergartens but also here and there in public establishments of Vienna and other cities,”

The Muslims in Austria doth protest so much that I think the Austrian government is correct to bring this in now – before every other little girl is swathed in serge.

Ibrahim Olgun, the head of the Islamic Religious Authority of Austria (IGGO), described the proposal as “unacceptable” in his interview to Anadolu Agency. He said the proposed ban was merely aimed at creating an agenda in which children would be used as political tools and the headscarf would be portrayed as an Islamic political symbol.

Secretary General of the Vienna Islamic Federation (IFW) Harun Erciyas argues on his behalf that this school hijab ban has been brought up in order to eventually impose a complete ban on the hijab.

In Austria, where Islam has been one of the officially recognized religions since 1912, there is a population of over 600,000 Muslims, corresponding to seven percent of the population, according to figures obtained from the Vienna Islamic Federation.