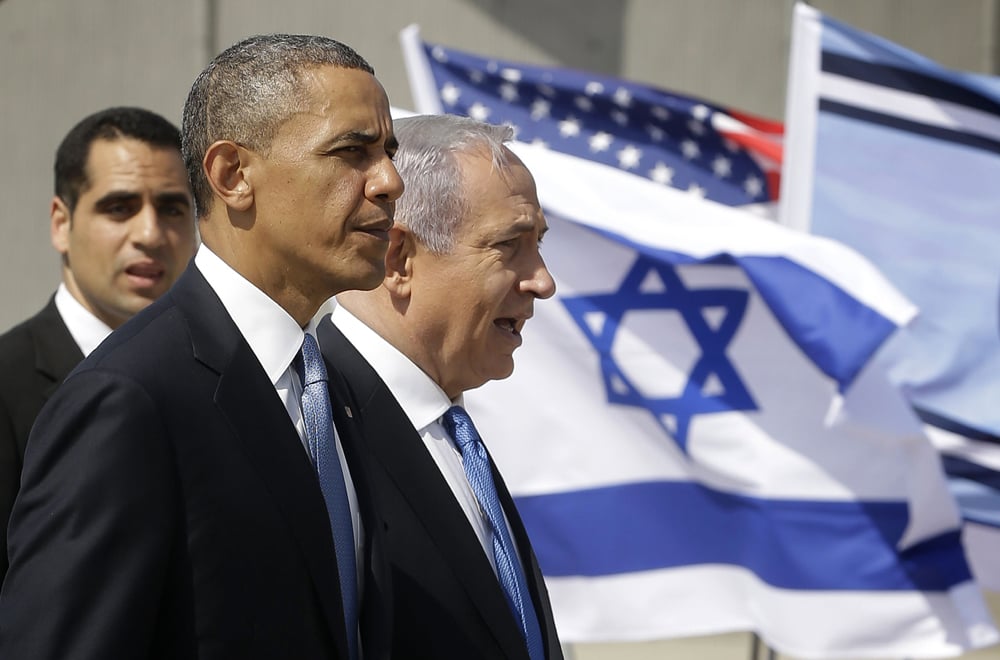 In his just-released A Promised Land, Barack Obama describes the Jewish immigrants to  Mandatory Palestine as ready to fight and defeat the Arabs. It’s a fanciful notion. Dov Lipman states:

His [Obama’s] claim that the new immigrants “organized highly trained armed forces to defend their settlements” is also misleading. A more accurate way to describe it would have been: “Because the Arabs in the region mercilessly attacked the Jewish areas, the Jewish refugees had no choice but to take up arms to defend themselves.”

The Jewish immigrants in fact only with great difficulty managed to defend their settlements; the marauding Arabs met little resistance; they attacked Jews before, during, and after World War I. The Jewish Legion – founded by Zev Jabotinsky – which had helped defend Jews from Arab attack during the Palestine Riots of 1920, was disbanded by the British in 1921. It was not until 1938 that the Jews of Palestine could mount an effective defense against the Arabs; this was due to a British officer, Capt. Orde Wingate, who gave Jews military training so that they could join the “Special Night Squads” that did not wait to be attacked by Arab marauders, but went out, at night, to confront them first.

Acknowledging that the Arabs were attacking Jews before there was even a state of Israel is important historical context for understanding the Israeli-Arab conflict….

The Jewish pioneers in Palestine were set upon from their earliest days by violent Arabs intent on driving them from the land. These Arab attacks are scarcely mentioned in Obama’s book; he depicts the Jewish pioneers — who were in fact untrained in war and largely helpless before Arab onslaughts — as powerful, well-organized, and able to prevail against the Arabs; this is the very opposite of the truth.

The description of “Arab nations that were just emerging from colonial rule” is a clear attempt to justify the Arab refusal of the U.N. Partition Plan. Those poor “Arab nations” that have been suffering due to outsiders colonizing their “nations” simply could not accept another “colonial” entity, the Jews, entering the region.

The Arabs in the Middle East turned down the Partition Plan for one reason: they were not prepared to accept a Jewish state, no matter how pitifully small it might be, on land that had once been, and therefore must always be, part of the Dar al-Islam. As for their supposed memory of colonialism, the Middle Eastern Arabs — unlike those in the Maghreb — had never suffered from European colonialists. Their masters were fellow Muslims – the Ottoman Turks. The British were in Iraq and the Emirate of Transjordan not to colonize these places, but to help the indigenous Arabs prepare for statehood; the French were doing the same for the Arabs in Lebanon and Syria. When Obama writes about “Arab nations that were just emerging from colonial rule” he apparently is confusing the Mandates system with colonialism; they are different things. The Mandates represented the very opposite of colonialism: they were meant not to subjugate people, as colonialism does, but to help them to create their own independent states.

But the truth is that with the exception of Egypt, which was not colonized, none of the neighboring countries that rejected the partition plan had been established states before World War I. Yes, the post-war mandates of the League of Nations gave control in the region to the British and the French for a few decades, but this was in place of the Ottoman Empire that had controlled the region for centuries. Thus, the image of countries emerging from long-standing colonial rule as a subtle attempt to justify their objection to the Partition Plan is simply false.

The U.N. partition plan was grossly unfair to the Jews, reducing their promised territory further still from what the Mandate for Palestine became, after 78% of its original area – all of Eastern Palestine — was ripped from it by the Mandatory, Great Britain, to become the Emirate of Transjordan. But the Jews in late 1947 were desperate for a state, no matter how small, in order to provide immediate refuge for the many Jews who were still languishing in DP camps in Europe, or who had tried to reach Palestine by ship and been turned back by the British.

Obama tells the story of the establishment of the State of Israel in two sentences, which are nothing short of outright revisionist history: “As Britain withdrew, the two sides quickly fell into war. And with Jewish militias claiming victory in 1948, the state of Israel was officially born.”

Wow. I don’t even know where to begin. The two sides didn’t “fall into war” when Britain withdrew; the two sides had been fighting for decades, with the Arabs—who rejected more than half-a-century of efforts to establish a Jewish state in the region—attacking the Jews, and the Jews defending themselves. When the British then left the area in May 1948, the Jews made a very difficult decision to declare their independence based on the U.N. Partition Plan, which gave the right for a Jewish state alongside an Arab state.

There were no “Jewish militias claiming victory.” There was a unified Jewish army that formed the Israel Defense Forces, which knew that the surrounding Arab countries would begin an all-out assault to destroy Israel the moment its Jewish leadership declared an independent fledgling Jewish state. And that is exactly what the Arab armies did. The new State of Israel fought off that assault for months, emerging in 1949 both weakened and fragile….

Obama never mentions that the Arab-Israeli war was not a case of Jews and Arabs who somehow, almost inexplicably and passively, “fell into war.”Arabs had been attacking Jewish pioneers nonstop since World War I. The 1948 war began when the armies of seven Arab states simultaneously attacked the nascent state of Israel, the day after the state of Israel had been declared, attempting to snuff out its young life. The Jewish army, not various“militias,” as Obama mistakenly maintains, managed to defeat and push back all of the attackers save for Jordan’s Arab Legion, which seized, and held onto, those parts of Judea and Samaria that in 1950 the Jordanians renamed “the West Bank” – a renaming intended to efface the Jewish connection to that land.

Obama seems to think that Israel and the Arab states that repeatedly attacked it are somehow equally responsible for the conflict. This defies belief. Three times – in 1948, 1967, and 1973 – Israel had to fight wars for its very survival, as Arab states attacked or were on the verge of attacking Israel; three times Israel won those wars. In 1956, after thousands of Israeli civilians in the Negev had been killed in separate attacks by Egyptian fedayeen from the Sinai, Israel finally seized the Sinai in self-defense. It returned that territory to Egypt in 1957, the fedayeen attacks, although they did not end entirely, went way down.

There were two mini-campaigns that Israel fought in Lebanon, first against the PLO terrorists in 1982, driving them out of the country, and then in 2006, against the terror group Hezbollah. Both mini-wars were begun by the Arab side, with repeated terror attacks by both the PLO and Hezbollah, that finally lead to an Israeli response. There were three campaigns against the terror group Hamas in Gaza: Operation Cast Lead (December 2008-January 2009), which began with ongoing rocket fire by Hamas; Operation Pillar of Defense (Nov. 2012), which was again prompted by Hamas’ rocket fire on southern Israel; Operation Protective Edge (July-August 2014), which was started by Hamas after the collapse of American-sponsored peace talks. None of these wars and campaigns are correctly described by Obama who blandly insists that Israel “engaged in a succession of conflicts with its Arab neighbors,” which clearly suggests that all these conflicts were started by the Jewish state.

Obama’s description of the 1967 Six-Day War continues this revisionism: “A greatly outnumbered Israeli military routed the combined armies of Egypt, Jordan and Syria. In the process, Israel seized control of the West Bank and East Jerusalem from Jordan, the Gaza Strip and the Sinai Peninsula from Egypt, and the Golan Heights from Syria.”

Here he fails to address what led up to the war, when all those Arab armies gathered along Israel’s borders and declared their intention to wipe it off the map. He doesn’t describe Israel’s pleading with Jordan not to enter the war, nor that Jordan altogether had no legal rights to the West Bank, which it occupied in 1948 and annexed against international law in 1950.

Obama fails to convey the atmosphere of alarm in Israel in the weeks before the Six-Day War broke out. There was anxiety in Israel as Nasser demanded that U Thant remove the U.N. peacekeeping troops from the Sinai, and then moved 100,000 Egyptian troops and 950 tanks northward in the Sinai toward the border with Israel. Meanwhile, from mid-May on, Nasser addressed cheering crowds in Cairo, telling them of the impending inevitable defeat of the Zionist state. Nasser also declared a blockade the Straits of Tiran, Israel’s maritime lifeline to Asia. He doesn’t mention, either, that the Syrian army mobilized on the Golan Heights, ready to stream into the Galilee when the Egyptians gave the word. Meanwhile France, Great Britain, and the U.S. did nothing to help Israel: no weapons, no diplomatic demarches, and no attempt to enforce the freedom of the seas against Egypt’s claim to blockade the Red Sea. Israel was, in its moment of maximum peril, completely alone. Jordan hesitated to join the Arab coalition, but once the war began, and despite the Israelis pleading with King Hussein not to enter the war, the King was assured by Nasser that the Egyptians were winning and he should join in to share in the victory and the spoils of war. To his great sorrow, the King believed Nasser and sent his troops into battle, where they were trounced by the Israelis, and Jordan lost all of the territory west of the Jordan River that it had occupied since 1948, the so-called “West Bank.” Egypt, Syria, and Jordan were the three aggressors; Israel was only defending its very survival. Obama conveys none of that.