An exclusive from the Telegraph

A free speech rally planned in advance of the Batley and Spen by-election has been banned by the town’s Labour-held council after officials said it was not Covid-secure. Laurence Fox, the former Lewis actor turned free speech campaigner, intended to debate George Galloway and Paul Halloran, a former candidate in Batley and Spen, in Batley’s marketplace on Thursday evening. The Reclaim party led by Laurence Fox have not put a candidate into Batley for this by-election but are considering the next general election in 2024.

Organisers of the rally, which intended to debate the controversial use of a cartoon of the Prophet Mohammed in a local school earlier this year, were told their outdoor event could not go ahead because it had not been assessed by the council’s “Safety Advisory Group”.

The organisers say that although their event has been cancelled, the council did not intervene in demonstrations outside Batley Grammar School earlier this year – when campaigners protested against the use of the cartoon of the Prophet Mohammed.

Speaking to The Telegraph on Wednesday night, Mr Fox said he had contacted West Yorkshire Police about his event and was told it could go ahead.

He claimed the Labour-held council had “cancelled free speech, and shut down the debate that is so important to the people of this country . . . This is an attack on Western democratic values,” he said. “This is an attack on everything that we must fight for, for our children’s well being, and I’m not going to stop. So I very much look forward to being in the marketplace tomorrow, and I very much look forward to sharing a message of positivity and inclusivity.”

Kirklees Council and West Yorkshire Police were contacted for comment.

Fascist Tommy Robinson is planning to demonstrate in Batley and Spen this Saturday to support far right candidates in the upcoming by-election. Anti-fascists and anti-racists must be there to kick Robinson back into the pit he’s crawling out from. I get the impression they really don’t like him. The threat of Robinson’s reappearance must be taken seriously.

Local Stand Up To Racism groups in Kirklees, Leeds and Wakefield, are organising a counter-protest to Robinson’s planned appearance. Anti-racists have pushed Robinson and his nasty thugs off the streets before. We must do it again. 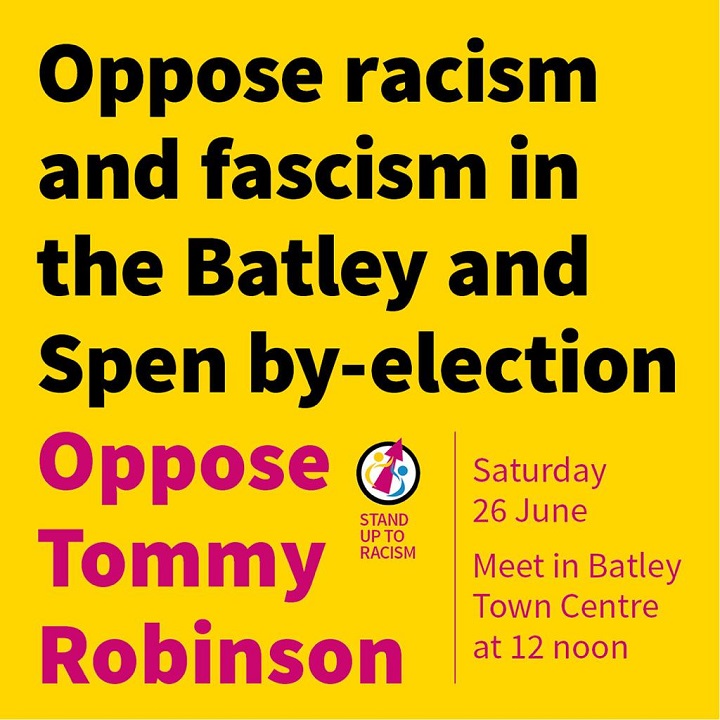 Dear old Hope not Hate (aka Soap, no Hope) have a bit more information about Tommy’s interest. They write:

There are five far-right or radical-right candidates in this election. None stand any chance of coming close to winning, or even securing a respectable share of the vote. What they are seeking instead is the chance to gain attention so they can recruit new supporters, and stir up division and hate in the community to exploit for their own ends.  As they define UKIP, the English Democrats and the Heritage Party (founded by former UKIP members) within this group I would answer, Not ‘Far right’, just not far wrong.

George Galloway is unlike other candidates in this briefing in that he is not on the right, but he has become increasingly divisive in his politics and his language.

But it is Anne Marie Waters of For Britian who Tommy is assisting at the weekend.

For Britain is a far-right political party led by the anti-Muslim activist Anne Marie Waters.

Her campaign has been strongly backed by the extremist and serial criminal Stephen Yaxley-Lennon (aka Tommy Robinson) and she has welcomed him as her “right-hand man”. Lennon is seeking to revive his flagging career, which has run into the ditch after being deplatformed across mainstream social media companies, going to prison (again), and declaring himself bankrupt ahead of a libel trial.

Yaxley-Lennon and Waters are planning an action day on 26 June.

* Daily protests outside Batley Grammar school by outraged Muslims (few of them local to Batley) was acceptable and permitted. Protests of such virulance that the teachers concerned are still in hidng in fear of their lives.

* A public debate between an official candidate and a representative of an official political party is not acceptable.

* So far a protest by ‘objectors’ not electoral opponents, to one or more candidates for democratic election is going ahead.