MOSCOW (Reuters) – The biggest swimming pool in Russia’s Muslim-majority North Caucasus region has banned women, prompting anger from rights activists and others who have accused the sports complex of discrimination.

The Anzhi Arena spa-complex near Makhachkala, the capital of the internal Russian republic of Dagestan, announced its policy change on the Instagram social media platform on Monday. “From Jan. 20 onwards attendance of the pool is open only to men,” it said. 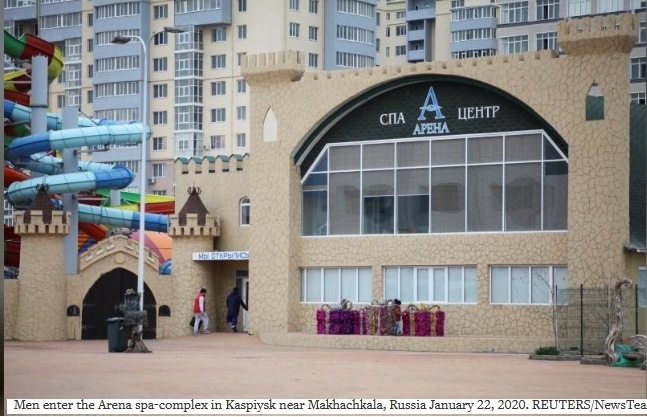 The swimming pool said its decision to deny entry to women, who were previously only admitted on Fridays for women-only sessions, was financially motivated.

“Unfortunately, there were hardly any visitors during women’s days,” the RIA news agency cited the spa complex as saying on its Instagram page, which has now been set to private. “Specifically because of this, after a thorough analysis and evaluation, the difficult decision was made that keeping days for women open in our pool was not viable.”

It is common in the North Caucasus region to find sports facilities offering men and women access on separate days of the week. But a complete ban on women using the pool goes against the Russian constitution, activists said.

Fatima Abdulkhalimova, 31, former professional swimmer, said she could no longer use the pool despite working there as an instructor.

“I think it’s to do with religion, I believe it is because a lot of religious guys come here,” she said.

Access to the pool had initially been permitted for both men and women, she said, before being restricted to Fridays only for women. If having women-only days was not financially viable, then why not simply return to the earlier, mixed-gender system, Abdulkhalimova questioned.

Three women from Dagestan have now filed a complaint to the regional Prosecutor’s Office accusing the sports complex of unconstitutional gender-based discrimination. One of the complainants is Svetlana Anokhina, editor of a local online media platform focused on women’s rights.

She said the practice of separating public spaces by gender was on the rise.“I have a daughter here and she has three daughters too. I’m angry because… I’m afraid for them. I don’t want them to live in a special ghetto for women,”

One woman, who said she frequently used the pool, said she had been refused a membership pass last month . . (she wrote) that the pool’s administrators had told her she couldn’t buy a pass because there was not enough locker room space for men.