Reading around the US news recently, at the BLM demonstrations (riots? Uprisings? Call them what you will) I noticed that among the slogans sprayed on to walls, next to the ubiquitous BLM was the letters ACAB.

I know ACAB, I thought. Sure enough there were also articles explaining to the US readership what ACAB means. It means All Coppers Are Bastards. In the US, BLM having culturally appropriated it they say ‘Cops’. Some of the articles then say ‘originally British, a story that it dates back to striking workers of the 1940s is probably apocryphal’.

I don’t know about the 1940s as I don’t go back that far, but it was certainly current in my childhood in the early 1960s. From an age when I was really too young to know what a bastard was.

There is apparently a piece of film of young men chanting it in 1958. I can myself date it definitely to 1965 when Great Train Robber Ronald Biggs made a spectacular escape from HM Prison Wandsworth, over the wall and into a waiting removal van.  Children in the playground sang

“Over the wall we go, All Coppers Are Bastards.” Sometimes altered to nanas, to escape the wrath of their mothers.

As did David Bowie when he wrote a novelty comedy number about prison escapes generally with the chorus “Over the wall we go, all coppers are nanas, Over the wall we go, leave them a card saying Wish you were here/Happy New Year”.  His version was preserved as an acetate and in this interview during his residence at the Marquee Club in 1966.

The following year, 1967 he produced his friend Paul Nicholas (actor and singer who progressed more conventionally into musical theatre) who recorded it under the name Oscar (born Paul Oscar Beuselinck) again using the euphemism ‘nanas’ which means ‘silly person’.

The BBC was very strait-laced then and wouldn’t play anything with bad language although the pirate stations were more liberal. Read the comments attached to that Youtube upload. It was a minor chart entry. And I bet you thought The Laughing Gnome was a one-off experiment in novelty comedy numbers done in Bowie’s childhood Cockney accent? 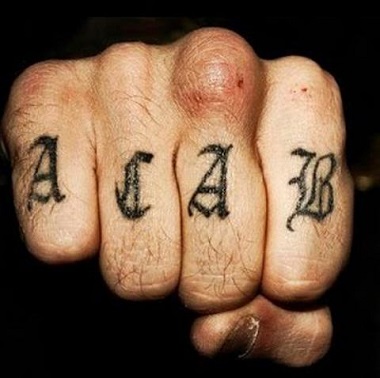 ACAB was (possibly still is) a very common prison tattoo, often done on the knuckles of each of the four fingers in such a way as to be visible as a fist. I saw it often when my Civil Service post took me around the Crown Court and prisons. Never in anger, I hasten to add. Photograph from the Gent Side website.  It can also be shown in a less obvious numerical form, 1312, or as a series of dots tattooed on the hand.

It became popular amongst the skinheads of the late 1960s/early 1970s. Both the racist sub-culture of skins, and those whose love of skinhead reggae music led them into friendships with their Jamaican neighbours.

My husband remembers it as a chant on the football terraces of various clubs.

It became popular in Germany; this at a time when German skinheads were imitating the English ones in all sorts of things, not all of them good (soccer violence) but not all bad (reggae music).

I have discovered that the anacronym became popular elsewhere, including Chile (no idea) and eventually the US and Black Lives Matter.

In the US the police force has been called the Cops, in the abbreviated form for generations. In England they have been known as coppers virtually since their foundation in 1829 in London, although then they were first nicknamed either Peelers, or Bobbies (that one has stuck to this day) after their founder Prime Minister Robert Peel.

Copper is an old verb, a variant of capture, i.e. capture a thief/robber/miscreant. Hence the phrase ‘All right, I’ll come quiet, it’s a fair cop’. The cop is the capture, not the policeman. The word is still current in vernacular English, as spoken by the native English, but the meaning is now more akin to receive.

“He copped the lot” may mean received the whole of an inheritance, or the whole consequences for some piece of trouble. “He copped it” means he died, frequently in battle or at least not in bed.

The next time BLM berate someone like Adele for wearing a Jamaican flag print top over August Bank holiday when the Notting Hill carnival would normally take place (she grew up in Tottenham, surrounded by Jamaican heritage schoolfriends and neighbours, how would they feel if she refused to join in with their invitations?) or Rita Ora who has never made any secret about being ethnic Albanian but who has still been mistaken by some to be dual black/white heritage, and recently accused of blackfishing, they need to remember that in using ACAB they have taken something from white culture.

And not just any white culture. The English – the worst of the lot.

Every time BLM spray paint ACAB on the Justice Building of Portland Oregon they are using something that originated in probably London, definitely England, at least 60 years ago. Not that I mind; English is big enough to go round the world. But they need to know what they are using. And reflect on the hypocrisy of calling out a hairstyle they claim is black and stolen, while using an acronym that is white and working class.

PrevIslam: Should we challenge their blasphemy laws?
Thousands protest in Pakistan over reprinting of Mohammad cartoons in FranceNext