Boris, Brexiteer in Chief, takes issue with Obama, who would lump us in with the Remains. From The Telegraph:

In two global conflicts, and throughout the Cold War, the United States has fought for the founding ideals of the republic: that government of the people, by the people, for the people should not perish from the earth.

So it is on the face of it a bit peculiar that US government officials should believe that Britain must remain within the EU – a system in which democracy is increasingly undermined.

Some time in the next couple of months we are told that President Obama himself is going to arrive in this country, like some deus ex machina, to pronounce on the matter. Air Force One will touch down; a lectern with the presidential seal will be erected. The British people will be told to be good to themselves, to do the right thing. We will be informed by our most important ally that it is in our interests to stay in the EU, no matter how flawed we may feel that organisation to be. Never mind the loss of sovereignty; never mind the expense and the bureaucracy and the uncontrolled immigration.

The American view is very clear. Whether in code or en clair, the President will tell us all that UK membership of the EU is right for Britain, right for Europe, and right for America. And why? Because that – or so we will be told – is the only way we can have “influence” in the counsels of the nations.

Not the "American view" - Obama's view. Not the same thing.

It is an important argument, and deserves to be taken seriously. I also think it is wholly fallacious – and coming from Uncle Sam, it is a piece of outrageous and exorbitant hypocrisy.

There is no country in the world that defends its own sovereignty with such hysterical vigilance as the United States of America. This is a nation born from its glorious refusal to accept overseas control. Almost two and a half centuries ago the American colonists rose up and violently asserted the principle that they – and they alone – should determine the government of America, and not George III or his ministers. To this day the Americans refuse to kneel to almost any kind of international jurisdiction. Alone of Western nations, the US declines to accept that its citizens can be subject to the rulings of the International Criminal Court in The Hague. They have not even signed up to the Convention on the Law of the Sea. Can you imagine the Americans submitting their democracy to the kind of regime that we have in the EU?

Think of Nafta – the North Atlantic Free Trade Agreement – that links the US with Canada and Mexico. Suppose it were constituted on the lines of the EU, with a commission and a parliament and a court of justice. Would the Americans knuckle under – to a Nafta commission and parliament generating about half their domestic law? Would they submit to a Nafta court of justice – supreme over all US institutions – and largely staffed by Mexicans and Canadians whom the people of the US could neither appoint nor remove? No way. The idea is laughable, and completely alien to American traditions. So why is it essential for Britain to comply with a system that the Americans would themselves reject out of hand? Is it not a blatant case of “Do as I say, but not as I do”?

The Americans [see above, M.J.]  see the EU as a way of tidying up a continent whose conflicts have claimed huge numbers of American lives; as a bulwark against Russia, and they have always conceived it to be in American interests for the UK – their number one henchperson, their fidus Achates – to be deeply engaged. Symmetrically, it has been a Foreign Office superstition that we are more important to Washington if we can plausibly claim to have “influence” in Brussels. But with every year that passes that influence diminishes.

It is not just that we are being ever more frequently outvoted in the council of ministers, and our officials ever more heavily outnumbered in the Commission. The whole concept of “pooling sovereignty” is a fraud and a cheat. We are not really sharing control with other EU governments: the problem is rather that all governments have lost control to the unelected federal machine. We don’t know who they are, or what language they speak, and we certainly don’t know what we can do to remove them at an election.

When Americans look at the process of European integration, they make a fundamental category error. With a forgivable narcissism, they assume that we Europeans are evolving – rather haltingly – so as to become just like them: a United States of Europe, a single federal polity. That is indeed what the eurozone countries are trying to build; but it is not right for many EU countries, and it certainly isn’t right for Britain.

There is a profound difference between the US and the EU, and one that will never disappear. The US has a single culture, a single language, a single and powerful global brand, and a single government that commands national allegiance. It has a national history, a national myth, a demos that is the foundation of their democracy. The EU has nothing of the kind. In urging us to embed ourselves more deeply in the EU’s federalising structures, the Americans are urging us down a course they would never dream of going themselves. That is because they are a nation conceived in liberty. They sometimes seem to forget that we are quite fond of liberty, too.

Obama would be quite at home among the Islamophiliac Eurocrats. Like them, he enjoys spending other people's money. Like them, he has been erroneously credited with keeping the peace. But that isn't the real reason for Boris's disagreement. It's a hair thing. Boris is the hair, if not the heir, to Donald Trump. You never see them together, after all. 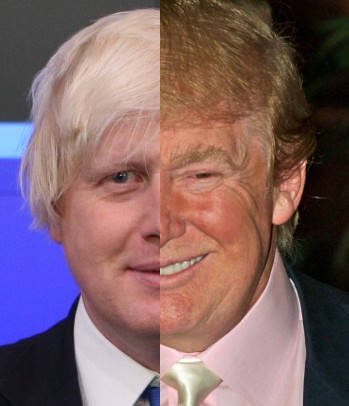 British terrorist shot dead in Texas synagogue siege was banned from Blackburn court 20 years ago for ranting about how he wished he had been on one of the 9/11 planes - so why WAS he let into America?

The Art of Omission

NER is Moving to Wordpress

Theodore Dalrymple - The Truth About Crime

17-Jan-2022
British terrorist shot dead in Texas synagogue siege was banned from Blackburn court 20 years ago for ranting about how he wished he had been on one of the 9/11 planes - so why WAS he let into America? 17-Jan-2022
Texas Synagogue siege: Two teenagers arrested in south Manchester over attack 16-Jan-2022
In the face of Omicron, Canada once again cowers in unnecessary fear