The Iconoclast
‹‹ Caught Him!
Trump’s Foreign Policy Is Coming into Focus ›› 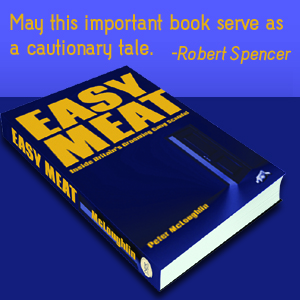 The last time Peter McLoughlin spoke to Sputnik, the British public were reeling from the exposure of a historic paedophile ring in Telford, Shropshire, through which as many as 1,000 young local girls were groomed for sex by a 200-strong syndicate of British-Asian men over a period spanning decades.

The scandal, which erupted in March, hardly came as a shock to Peter, and he was similarly unsurprised to learn local authorities — including the council and police — were well aware of the issue in the early 1990s but failed to act for fear of being labelled racist.

After all, four years earlier he'd authored Easy Meat, which delved into the issue of Islamic grooming gangs in forensic detail. His conclusions were stark — they're a nationwide epidemic, operating in almost every major town, and have been consciously covered up for decades. Perhaps predictably, his work was almost totally ignored by the mainstream — and while there's growing recognition of the phenomenon today, he believes the book will still be "years ahead" of public debate in decades to come.

Nonetheless, Peter's own views on the subject have evolved since its publication. While previously he believed officials' blind eye to grooming gangs was simply motivated by stringent political correctness, now he concludes politicians, supported by the media, law enforcement and other state organs, have forged a conspiracy of silence obscuring all negative aspects of Islam, in support of the long-term goal of "total Islamisation" of the West.

"Political elites are deliberately importing Muslims to the West, so that by the end of the 21st century Europe will be Islamic. The best way to end democracy — the limited oligarchical facade of democracy we have now — is to ensure populations are prepared to sacrifice rights and freedoms in return for Sharia law. Globalists need a global culture, and Islam is the one culture that does not give in. If elites were honest about this objective, and the reality of Islam, it'd never happen — so there's a constant need for immense duplicity," Peter told Sputnik.

The case of Islamist preacher Anjem Choudary palpably demonstrates "the extent to which this deception is constructed", Peter believes.

Jailed for five and a half years in March 2016 for inviting public support of Daesh*, a proscribed organization, in the 15 years prior the London-born Choudary had frequently made headlines for his extremist statements and activities. An avowed supporter of the global implementation of Sharia law, he helped recruit British-born Muslims to Osama Bin Laden's International Islamic Front in Chechnya, praised the perpetrators of the September 11 2001 terrorist attacks in the US and the July 7 2005 London underground bombings, called for the execution of the Pope in 2006, and co-founded Salafi Wahabi organization al-Muhajiroun — and much, much more.

Throughout his time in the media spotlight, journalists and politicians alike repeatedly and vociferously denounced him as an aberrant "hate preacher", whose extreme interpretation of the Quran was anomalous, having little or no support among the UK's Muslim population. His release from prison on October 19 produced a flurry of similar statements — but Peter's take is rather different.

"Choudary is not a maverick or an outlier. People who live in his adopted home of Walthamstow have told me whenever they see him on the street, he's mobbed by local Muslims, queuing up to shake his hand. Before his imprisonment, a production company made a documentary comparing Choudary and Tommy Robinson — Islamic extremists and anti-Islam activists being mirror images of one another is a common media trope — which featured footage of him receiving standing ovations in mosques, even ones he was supposedly banned from. Channel 4 purchased the documentary but it never aired, interestingly," Peter tells Sputnik.

If true, it wouldn't be the first time the broadcaster helped suppress uncomfortable truths about Islam in Britain. In May 2004, the network produced a 'Dispatches' documentary — Edge of the City — dealing with Muslim grooming gangs in Bradford, northern England.

The project was the culmination of an almost decade-long inquiry by director Anna Hall — she'd been contacted by the city's Barnardo's branch in October 1996, with a view to producing a film warning children and parents about a pattern of child sexual exploitation in the area, in which local Asian men were targeting girls aged-11 and up, giving them phones, and showering them with attention and affection — when they eventually had sex, the men would introduce their friends to the girls, and the girls would be coerced into sleeping with them too.

"Everybody wanted to pretend it wasn't happening. All anyone seemed concerned about was the risk of a race riot if we mentioned it, Hall has said.

However, on the eve of broadcast, Bradford council pressured Channel 4 into cancelling the program, on the basis it could impact the result of the impending local elections in Bradford, and potentially produce skirmishes between local youths, split along racial lines, which had engulfed the city three years prior.

"That a national broadcaster crumpled so easily to political pressure, and allowed a very important factual program to go unshown because it could've influenced the outcome of an election beggars belief. It's a clear demonstration the UK political establishment do not want citizens' voting behavior to be influenced by facts and evidence — and the determination of the authorities to obscure facts from public view," Peter told Sputnik.

Life as an Anti-vaxxer

The Mystery of Evil

A Perilous (But Not Hopeless) Time on the International Stage

Men Should Not Be Shamed on Dec. 6

Exposing prosecutors, but not judges: journalistic hypocrisy, or calculated self-interest?

Islamic State Claims Responsibility for an Attack in Nigeria

The Sermon on the Mount - Ordination of the 12

The toxicity of Zahra Billoo (CAIR-SF)