BREAKING NEWS: Asia Bibi is to be freed!

The Supreme Court on Wednesday acquitted Asia Bibi, a Christian woman condemned to death on blasphemy 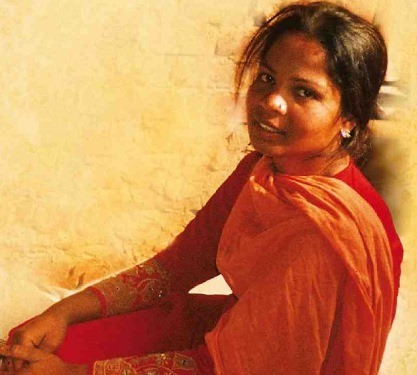 charges after accepting her 2015 appeal against her sentence.

The 56-page detailed judgement has been authored by CJP Nisar, with a separate concurrent opinion note from Justice Khosa.

“It is a well settled principle of law that one who makes an assertion has to prove it. Thus, the onus rests on the prosecution to prove guilt of the accused beyond reasonable doubt throughout the trial,” noted the top judge in the order. “Presumption of innocence remains throughout the case until such time the prosecution on the evidence satisfies the court beyond reasonable doubt that the accused is guilty of the offence alleged against him. . . principles which seeks to ensure that no innocent person is convicted.

“Keeping in mind the evidence produced by the prosecution against the alleged blasphemy committed by the appellant, the prosecution has categorically failed to prove its case beyond reasonable doubt,”

The CJP ended the judgement with a hadith of the Holy Prophet (Peace Be Upon Him) on the rights of minorities. (is his life now going to be in danger from the mob? Or is he more powerful than the politicians who were killed after expressing support for her? The riots have already started – see below)

“I can’t believe what I am hearing, will I go out now? Will they let me out, really?” Bibi told AFP by phone from prison after the ruling. “I just don’t know what to say, I am very happy, I can’t believe it.”

Shortly after the ruling, hundreds blocked a key road linking Rawalpindi with Islamabad. People are also gathering for protests in Karachi and Peshawar. Similar rallies are being held elsewhere as police urge demonstrators to disperse peacefully.

Christians and Christian institutions have been warned with alerts to be careful due to the high risk of revenge attacks. Christians have been bracing themselves for expected violence following the verdict.

The head of Tehreek Labaik has released a special video in which he is telling his party faithful to get ready for anything if the decision is favour of Asia Bibi. In a previous rally following the delay of judgement he uttered death threats against the authorities and directed his followers to revolt by staging protests without direction from the central party.

Asia Bibi was convicted for blasphemy under Section 295-C of the Pakistan Penal Code for allegedly defaming Prophet Muhammad (Peace Be Upon Him). The offence carries the mandatory death penalty under Pakistani law.

The allegations against Bibi were that she made three “defamatory and sarcastic” statements about the Holy Prophet on June 14, 2009 during an argument with three Muslim women while the four of them were picking fruit in a field in Sheikhupura. She was asked to fetch water, but the Muslim women objected, saying that as a non-Muslim she was unfit to touch the water bowl. The women later went to a local cleric and accused Bibi of blasphemy against the Holy Prophet, a charge punishable by death under legislation that rights groups say is routinely abused to settle personal vendettas.

Reports are coming in of protests in the form of blocked roads and sit-ins. 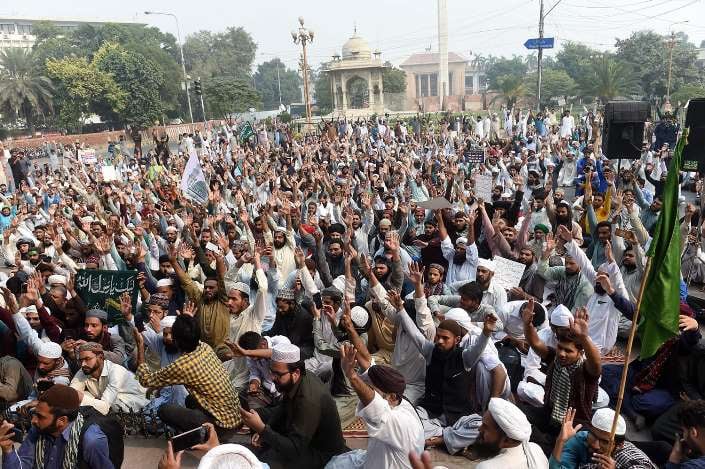 Reports of protests breaking out as of 9:41am outside the Punjab Assembly after the verdict was announced. Workers of  right wing political party began gathering outside the assembly.

Islamabad’s hospitals have been put on high alert and the leaves of all paramedical staff have been cancelled. The metro bus service has been suspended in Lahore. Several schools have announced early closure and are sending children home. . . reports of minor unrest emerged from Karachi’s Numaish.

Traffic at Merewether Tower in Karachi has been blocked, as have roads in Baldia Town. The protest in Baldia is being led by MPA Qasim Fakhri. Protesters have begun burning tyres at Tower. A protest has begun outside the Sukkur Press Club against the Supreme Court verdict. Both sides of the road outside the club were blocked. The police are on high alert at entry and exit points to the city. Protests have also sprung up at Farooq Azam Chowk in Charsadda. The police are on standby in the city.

In Islamabad, the Abapara and Faizabad roads have been blocked due to protests.

The Faizabad-Islamabad Expressway has been blocked. Shops in Sargodha were forcibly closed as protesters began protesting at 12 Block Chowk. Fatima Jinnah Road has also been blocked due to protests.