Britain’s ‘worst ever’ child grooming scandal exposed: Hundreds of young girls raped, beaten, sold for sex and some even KILLED

The left-languishing, Hope not Hate financing, Labour party mouthpiece Mirror newspaper has finally realised what we have been saying for too many years. They can’t bring themselves to mention the ‘M’ word; they are barely able to mention that the perpetrators are ‘Asian’ (but from the names of the men convicted we know they don’t mean Tibetans, Sikhs or Chinese!). But better late than never. It does mean that they have remembered, at long last, that it is the English white working class whose daughters have suffered and the English mostly white working class who buy their newspapers.

From the Sunday Mirror

SPECIAL SUNDAY MIRROR INVESTIGATION: Authorities failed to act over 40 years – despite repeated warnings to social workers – with up to 1,000 girls, some as young as 11, abused in Telford. 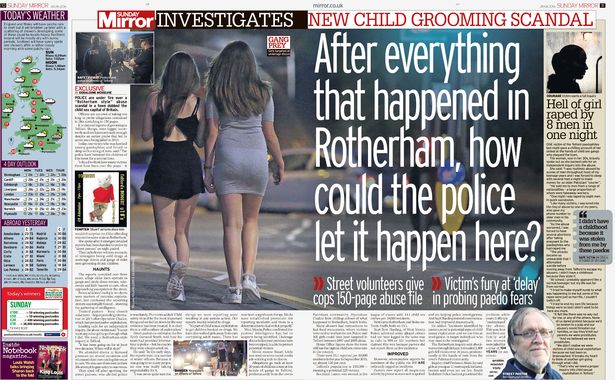 UP to 1,000 children could have suffered in Britain’s worst known abuse scandal – where sex gangs targeted girls as young as 11. The rape hell of vulnerable young girls in one town – Telford – went on for a shocking 40 years (why the past tense – it’s still happening, so I hear)

Despite similar high-profile cases in Rochdale and Rotherham, authorities in Telford ­repeatedly failed to stamp out a network of abusers.

Our investigators have spoken to 12 victims, most of them unconnected. They accused more than 70 abusers and claimed that violent rapes were still taking place just months ago.

One 14-year-old, groomed and abused after her phone number was sold to paedophiles, said: “I hated what was happening and my abusers made my skin crawl but I was told that if I said a word to anyone they’d come for my little sisters and tell my mum I was a prostitute.

“Night after night, I was forced to have sex with multiple men in disgusting takeaways and filthy houses. I must have been getting the morning after pill from a local clinic at least twice a week but no one asked any questions. I fell pregnant twice and had two abortions. Hours after my second termination, I was taken by one of my abusers to be raped by more men. The worst moment came just after my 16th birthday when I was drugged and gang raped by five men. Days later, the ringleader turned up at my house and told me he’d burn it down if I breathed a word of what had happened.”

Documents which will be passed to the Home Office reveals authorities knew of the horrors a decade before investigating – and shows how they tried to hamper our probe.

Cops also said there could be as many as 200 perpetrators – but just nine were caged and the case was then closed. Today our investigation reveals the authorities were told of the abuse epidemic more than a decade before Chalice.

Our probe – backed by documents obtained under the Freedom of Information Act – found two predatory paedophiles began targeting girls from a local children’s home in 1981.

One of the abusers earned thousands a night for years trafficking girls around the country for sex with hundreds of men, according to one victim. In another case, a 14-year-old was groomed by an 18-year-old Asian man in 1985. After she had his baby he passed her to friends to have sex with and allegedly rape her.

The vast majority of those targeted were young white girls but teenagers from the Asian community also fell victim.

One report commissioned by local Telford and Wrekin Council in 2013 admitted: “From the late 1990s professionals had concerns about the nature of some of the child sexual abuse cases presented to them.” But it blamed “understanding and learning at that time” and “existing procedures”.

Two separate investigations were launched at the same time as Operation Chalice after two victims named dozens more abusers. The victim in one case – groomed at 13, sold for sex and gang raped – said she pulled out of the investigation because she “didn’t feel she was being emotionally supported” by police.

Another victim claims officers discouraged her from pursuing her request for evidence after she told them she was speaking to the Mirror.

A mum and four girls have died in tragedies linked to the abuse.

Lucy Lowe, 16, was killed in 2000 along with her mother and sister after her 26-year-old abuser Azhar Ali Mehmood set fire to their house. Cabbie Mehmood targeted Lucy in 1997 and she was just 14 when she gave birth to his daughter. He was jailed for murdering Lucy, her mum Eileen and 17-year-old sister Sarah. But he was never arrested nor charged in connection with any child sex crimes over his illegal relationship with the schoolgirl.

Lucy’s death was used as a warning to other girls, according to victims. One, drugged and gang raped by nine men two years later, said the threats drove her to attempt suicide. She said: “I was scared my family would die like Lucy’s. I thought they’d only be safe if I killed myself.”

In 2002, 13-year-old Becky Watson died in a car accident that was reported at the time as a “prank”.  The Mirror investigation found she suffered two years of abuse by an Asian grooming gang which began when she was just 11. Tragic diaries obtained by the Mirror reveal her torment at being made to “sleep around”.

Her mum Torron Watson said she repeatedly told police that Becky was being abused – and even gave them a list of suspects. She told the Sunday Mirror: “Girls like Becky were treated like criminals. I was crying out for help but it felt like I had nowhere to turn. If Becky’s abuse had been properly investigated by the authorities more girls could have been saved from going through this hell.” We know. We have been saying this for years.

The EDL tried to protest against this in Telford in 2011 – local and left-wing national newspapers were fervent in their efforts to get the march banned and joyful when it was. A static rally was allowed in Wellington, a suburb of Telford. The EDL and other groups did demonstrate in 2016, with opposition from the usual suspects.

If you want to know more the best book is Easy Meat by Peter McLoughlin, published here by the New English Review Press. Available here.

PrevCincinnati: Another University professor loses his job after trying to teach a Muslima
Easy Meat by Peter McLoughlin: the best work on grooming gangs of England and WalesNext