From  the Daily Mail and the Times

A British charity is being investigated after it praised assassinated Iranian general Qassem Soleimani as a martyr. The Islamic Centre of England, a charity with assets of more than £4 million, organised a vigil in London on Saturday to commemorate the warlord.

The event was attended by more than 2,000 people, including Iran’s ambassador to London, The Times reported.

Seyed Moosavi, 51, the charity’s director and the UK representative of Iranian leader Ayatollah Khamenei praised Soleimani as a ‘dedicated soldier of Islam’ who had died at the hands of ‘the most wicked members of the human race’.

The Charity Commission said: ‘We are aware of a vigil… and publications on its website. We will be contacting the charity to seek further information.’ 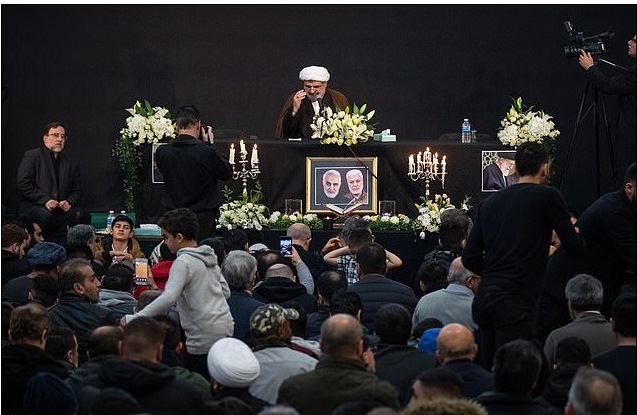 Seyed Moosavi, 51, director of the Islamic Centre and the UK representative of Ayatollah Khamenei, the Iranian supreme leader, issued a statement in which he praised Soleimani as a “dedicated soldier of Islam” who had died at the hands of “the most wicked members of the human race”.

The centre, based in a former cinema in northwest London, is a registered charity which boasts assets of more than £4 million. It funds other Islamic centres in Glasgow, Cardiff, Birmingham, Manchester and Newcastle. The centre’s legal aims are “advancing the religion of Islam and education, and the provision of social and religious welfare facilities”. Charity Commission rules allow political campaigning only “in the context of supporting the delivery of its charitable purposes”.

The centre is entitled to claim taxpayer-funded gift aid on donations, which could be up to £150,000 a year.

Separately, Whitehall officials have begun examining its finances. They are understood to be furious at the comments amid threats of revenge from the Iranian regime and are investigating if the charity receives any public funds.

The centre, which is one of the leading Shia Muslim mosques in the UK, is part of a network of organisations considered to have close links to the regime in Tehran, including the Islamic Human Rights Commission (IHRC). They are the outfit that organise the annual Al Quds – Death to Israel march still permitted through London’s streets.