This is the The Metro, a free newspaper with an agenda

Mosques in an east London borough have broadcast the call to prayer publicly for the first time due to the lockdown during Ramadan. Local authority Waltham Forest agreed that nine mosques could perform the Adhaan as mosques are closed and Muslims are unable to pray communally as they would usually at this time. The call to prayer was first broadcast yesterday and will continue at sunset daily throughout the fasting month of Ramadan, as well as again for Friday Juma prayers. 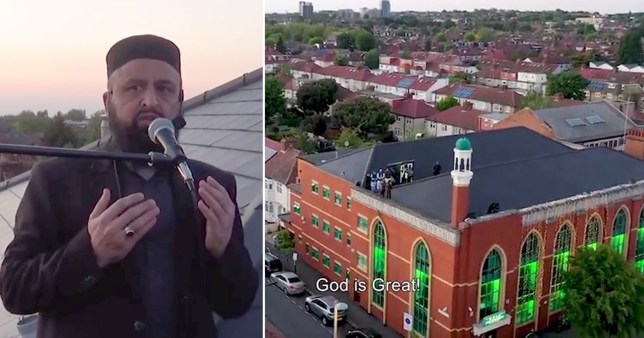 Arfan Abrahim, who was part of the group asking the council to allow it, told Metro.co.uk: ‘It happens in Whitechapel at the East London mosque and has been happening for many years, but in this side of London never, and in this borough specifically, never. There is a reason for that; in most of the mosque planning permits granted that I have seen external broadcast of amplified sound is expressly forbidden as one of the terms of planning permission being granted. About which more later.

He said hearing the call to prayer provided a connection to the mosque for people. ‘For my parents at home, they were in the garden and heard it so at least they could listen to it and hear it coming directly from the mosque,’ he said. ‘It meant a lot for them – that the mosque is still there and serving its purpose. Hopefully this will be over very soon and we can get back to some sort of normality.’

He said that before the call to prayer was broadcast, he and others had leafletted houses in the surrounding area to explain what would be happening.

Waltham Forest Council of Mosques said: ‘We trust this will not inconvenience anyone and hope you enjoy the melodious Adhaan. The Adhaan will take less than five minutes and due care will be taken not to cause nuisance to the neighbourhood. ‘We stand shoulder to shoulder with our neighbours and we are sure that you will support us in this endeavour.’

Leader of Waltham Forest Council, Clare Coghill said: ‘The holy month of Ramadan is normally a time for the Muslim community to come together to pray and break their fast. ‘Like many aspects of all our lives, this has been affected by Covid-19 and the requirement to remain socially distant. ‘As an alternative form of connection during this special month, the Waltham Forest Council of Mosques contacted the council to request that as an alternative to congregating they announce a short call to prayer at a number of mosques adapted to remind worshippers to stay at home. ‘The council considered the request as it would with any religious or faith group looking to responsibly worship during this difficult time. ‘Ramadan Mubarak to all our Muslim community.’

The first I heard of this was a friend who lives very close to another of the borough’s mosques. I grew up in Waltham Forest. I remember the mosque pictured above, that of the Waltham Forest Islamic Association when it was built, from what had been a textile factory. And how offensive I found their banner declaring that ‘God is only one, he has no son’.

I know that there have been many complaints from residents about this noise, to the Council and by local councillors who disagree with the decision.  The broadcast to prayer is against Waltham Forest’s own  planning conditions given to the Waltham Forset Islamic Association in 2004 when they extended the building and added the dome. The original conversion was some time around 1976 when my parents were alive and I still lived at home. 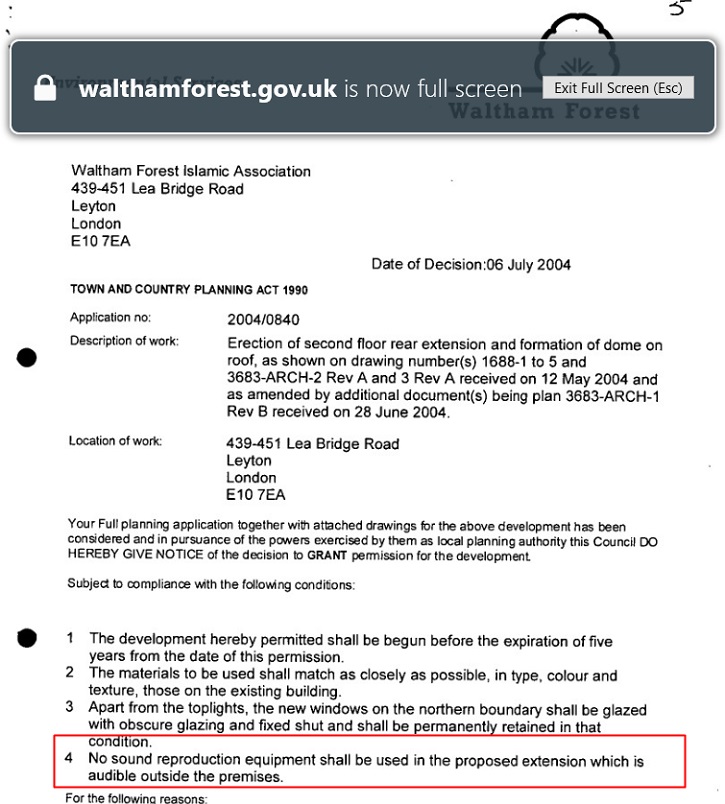 This is particularly disheartening as Church bells are silent. Social distancing is impossible in a ringing chamber (not that the men on the roof of the mosque are making any effort to keep 6 feet apart, see below) and the church authorities have told the Central Council of Church Bellringers, who asked to be allowed to ring a solo bell or a set of Ellacombe chimes (400 English churches have these, they can be operated by just one person to produce either a tune or a chime) were told

““Staying at home and demonstrating solidarity with the rest of the country at this testing time, is, we believe, the right way of helping and ministering to our nation. Therefore, for a season, the centre for the liturgical life of the church must be the home, not the church building.”
(Letter from Archbishops and Diocesan Bishops of the Church of England to all clergy in the Church of England 27 March 2020).

If we had to celebrate Easter from our vicars’ homes without music or bells, and our Jewish neighbours celebrated Passover in the same way then I think it is ungracious of the Muslim communities (worldwide) to ask for privileges for Ramadan, and of course foolish of the authorities to grant those privileges. But as we know, Islam comes to a country to dominate and not be dominated. 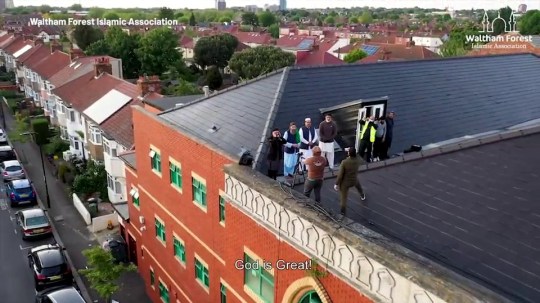 Left – does that look like ‘social distancing’, ie stand at least 2 meters or 6 feet from anyone who is not a member of your household,  to you?