From the Telegraph and the Birmingham Mail. The reaction of the Muslim community ‘leaders’ is interesting. Whether they are calling for an immediate chance of policy or are presenting a conciliatory reasonable front ultimately they are united in working for the eventual domination of Islam in England.

A Catholic school has prompted a uniform row by banning a four-year-old Muslim girl from wearing a headscarf at school.St Clare’s School in Handsworth, on the outskirts of Birmingham, asked the girl’s parents to respect their strict uniform policy, which includes no headwear or scarfs.

The primary school’s decision ignited a debate among community leaders after the girl’s father called on town hall officials to intervene.

Waseem Zaffar, Birmingham City Council’s Labour cabinet member for equalities, said that he had met with the head teacher and told her the ban on the scarf was against the equalities act.

He added: “I’m insisting this matter is addressed [as soon as possible] with a change of policy.” 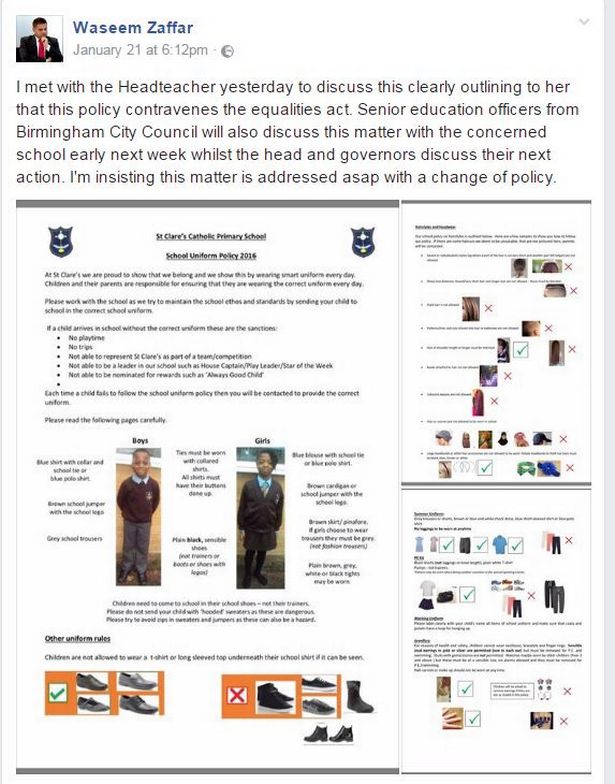 However, his colleague Majid Mahmood said that since it is a faith school, St Clare’s is “maybe within its rights to insist upon a particular dress code,” just as a Muslim faith school “may require girls to wear headscarves”.

Dr Mashuq Ally, a former head of equalities for the council, agreed saying there is no religious requirement for girls of infant school age to wear the hijab.  He also pointed out that a faith school is allowed to set its own uniform policy and exempt from discrimination legislation.

Dr Ally went on to say that if there are demographic changes which lead to a significant number of Muslim children attending a Christian school, then the parents should ask the school governors to consider changing the uniform policy. In other words the long game: ‘wait until there are enough of us brothers, then what we want will fall to us easily’

Shaista Gohir, of the Muslim Women’s Network, said making young children wear the headscarf was as bad as kids having spray tans and pole dancing lessons. And she insisted it was NOT a requirement of the faith for young girls of that age.

Ms Gohir said the hijab was designed to discourage sexual advances from men and enforcing it on young children could “sexualise” them.

“We challenge parents who spray tan or give pole dancing classes to seven-year-olds, so we should be challenging Muslim parents who make young children wear the hijab,” Look! non Muslim parents can be even worse!!!...I would not like to see it normalised for four and five-year-olds to be wearing headscarfs.

“In the current climate there is so much negativity towards Islam”. And everything must be done to make Islam look good until there are enough of us etc.

Let us hope that this time, unlike so many schools before them, the school stands firm.

PrevBourbons of the Press Straggle on in Defeat
Lords and FliesNext